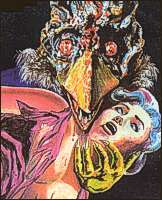 I love a mesmerist to tell me what a movie is going to be about before it starts, hence, I love Criswell. Blood Freak has it's own version of Criswell to tell us such profundities as 'we live in a world of constant change' and 'catalysts spur our emotions.' Well, he'd be the version of Criswell that wears a shiny opened shirt, chain smokes, and basically looks like the seedy, sweaty owner of a strip club where you can get a handjob in the back room, and the back room is panelled in that terrible wood grain wallpaper. Blood Freak's got that guy. And he'll be popping up periodically to inform us on the human condition as the film progresses.
After we meet seedy Criswell, me meet Herschell (his name is Herschell AND the movie is set in Florida....coincidence? I think NOT!), a hulking man with chops and a motorcycle fresh from a tour in Vietnam, in other words, the filmmaker (the guy playing Herschell, coincidentally) wants you to think he's sex-ay. Apparently Angel, a bible thumping Christian, and her sister Anne, the antithesis of Angel, a pot-smoking party girl, think Herschell is da bomb. Angel meets Herschell on the highway when her car breaks down and she take's him back to Anne's house for a party, even though the 'drug scene' isn't her thing. They have a bible study in the back room, while Anne and her friends partake of marijuana, heroin, and coke underneath a velvet painting of some tigers and a portrait of a pope. Anne and Angel wear some of the most revealing outfits ever; I don't think Angel's shorts could get any shorter, and she's the church-goer! Oh, the seventies.
It seems like Herschell is falling for Angel and it makes Anne crazy. She wants to fuck him so bad, she introduces him to marijuana. He initially denounces pot, but after she calls him a coward and dumbass, he tokes up. I'm a little disappointed in Hersh here - he should have stuck to his guns and stayed sober. And I'm a little disappointed in Anne too - she's pretty attractive, she could likely have any guy at least fuck her - why share your drugs with someone who doesn't want you? Lame all the way around.
Oh, there's 'Criswell' again, putting in his two-cents. Right as Herschell and Anne are about to get down to sexy times, Cris pops up and talks about our destinies and the nature and interpretations of the characters.
Then's it's off to the poultry ranch where Herschell has procured employment. He's got his pompadour up and his Elvis sunglasses on and he's ready to get down to business, which includes a montage of day-to-day chicken and turkey wrangling and egg collecting, as well as eating an entirely genetically modified turkey to see what the side effects on humans are. Hey, two guys in lab coats asked him to scientific stuff, so for the good of science, and the promise of some dank bud, he agrees. See how quickly marijuana can mess you up, kids?
So the inevitable happens, Hersch becomes a slavery man-turkey - the body of a man with the giant papier mache head of a turkey. But he's still partly human, because he goes to Anne so she can assess the situation, which she does badly, 'what will the children look like' and 'what will the children think of their father,' but he gobbles a few times, turns out the lights, and it's all 'oh, Herschell' bow chicka wow wow. Gross.
Then cue the murderous rampage. Turkey time! Seems Herschell can only survive on the blood of drug users, so he finds them around South Florida in cars shooting up and grabs them and hangs them upside down and pecks their necks, gathers the blood in his cupped palms, and slurps it up through the beak. Yeah, the blood freaking as I like to call it.
I won't divulge the ending, you have to see this 'turkey' yourself to believe it but I will say this. I haven't seen such an anti-drug flick since Henelotter's Brain Damage. Blood Freak clearly has this agenda to it. See what happened to Herschell? Drugs lowered his resistance so he engaged in unsafe behavior and got fucked, and by getting fucked, he literally turned into a monster. You do drugs, you don't read your Bible, you don't take care of yourself and you consort with loose women, you'll wind up just like Herschell. Slimy Criswell tells us we must turn to God to solve our problems. In case you missed it - drugs are bad! And Cris tells us this while he's coughing on a cig. Good stuff here, ya'll. Good exploitative stuff. Lots of drug use with a gritty realness to it, sex, bad acting, even worse fashion, and outlandishness. Sorry to cut it short, I could go on for hours, but I gotta get out of the office because the cats are about to eat Christian - they're outta chow! Attack of the Living Cats is about to go down at my house.
Posted by Jenn at 12:07 PM