Cool Stuff, Where I've Been, What's Going On

Not necessarily in that order. And as much as I normally don't like posts like 'oh I've been so busy, I can't blog, blah, blah' I still figured I'd be obligatory and post one of those junks.

As I posted last week, Sam and I headed to NYC for the Specials 30th anniversary tour and our first few consecutive days off in a long time. Fun was had, money was spent in copious amounts on food, wine, a sweet jacket, some Misfits sneakers, some Ben Sherman stuff, and the aforementioned fifty dollar tshirts (they were actually like 30, but I had to have all three). Headed home and immediately went off to work. Worked like the living dead (no makeup, for crying out loud!), did another brunch shift today (again, with no makeup, can you tell I'm tired?) and decided that if I don't post something about movies I've been watching, I should be brought to justice by an angry mob. There's just no kind of justice as angry mob justice.

There's always time for a good old fashioned movie watch. Before we left, I got all classic and shit with Fritz Lang's 'M' and a chilling performance by Conrad Veidt in THE MAN WHO LAUGHS. I also watched the newer CARRIERS, and of course, wasn't impressed. Not just because it was new, but because it belied the point to where I was exhausted and also because it was quite boring. Get thee back to the seventies, I know, I know. I was born too soon.

I have lots of stuff in the queue for the coming weeks, BORN OF FIRE being one (which is that weird Indian Freddy Krueger movie if I'm not mistaken), and THE PENALTY, kind of the lower torso version of THE UNKNOWN, as well as some crazy stuff I've picked up on VHS along the way that even I'm not really all that familiar with that looks interesting. DREAM NO EVIL, anyone? That's what I thought.

I miss everyone and the whole blogging scene, but sometimes, in order to be fresh and new and fun, we, as in I, needs to take a break. I feel like I've been really struggling lately to come up with good titles and reviews for everyone and that's not what it should be about. I should do this because I love it, which I do, but apparently I've become a bit burnt out, but hopefully this hiatus won't be too much longer. I love you all. Keep watching movies, keep it weird and wonderful. Keep the horror blogging scene strange. If we don't, who will?

But before I go, a couple of cool things I've run across in my interweb travels recently:

Behold, from the BBC - a two headed lizard who's head's sometime attack each other. You best believe if I had another head, I would fight with that thing all the time. Click the link to read the article; it's pretty cool and I like two-headed stuff. 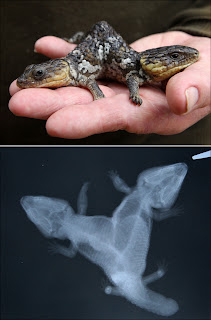 Secondly, if I liked kids in the slightest (which sucks because Sam has three, wah wah) and wanted to have some, I would get the little aspiring mad scientists these blocks from Xylocopa: 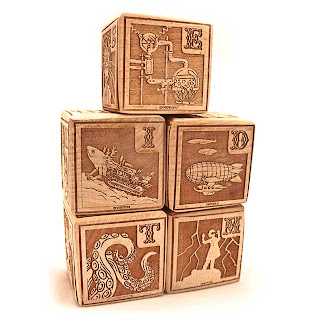 Cool, huh? Enjoy this final pic of Moochie being super cute, posing like he's in chair jail. Note the paw up on the slat of the chair. I can almost hear him singling 'nobody knows...the trouble I'm in', while raking a tin coffee cup up and down the slats of the chair. Forlorn? Yes. A-dor-a-bul? Yes, please. 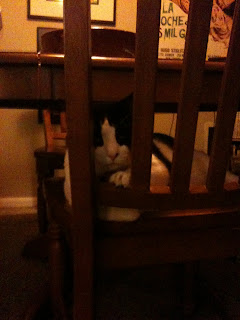