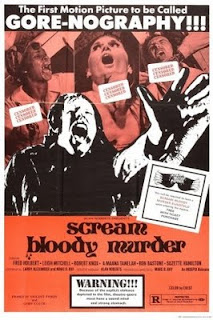 You know it's gonna be good when the opening scene is of young Matthew on bulldozer deliberately driving over his father. In a twist of fate, Matthew falls off the machine and gets his hand mangled in the treads. It's all weird camera angles and crazy wide angles that make this Oedipal opening all the more bizarre and wonderful.

Cut to ten years later and Matthew has just returned home unannounced from the nuthouse, crushed hand replaced with a creepy metal claw (you know, the kind you'd find on your car door handle after a night of making out in a secluded area). Mom's been recently remarried and Matthew quickly dispatches this interloper with an axe. Mom's pretty miffed at this action, and in a struggle with her son, she falls and bashes her head in on a rock. Matthew takes to the road and accepts a ride from a cute young couple, only to kill them as well, because he imagines them as his mom and stepfather.

He ends up in Venice Beach were he befriends a prostitute, Vera, on the steps of her cottage as she's painting an abstract. (Vera is subsequently played by the same woman playing Matthew's mom.) Matthew resolves to save Vera from her life, but he needs a home in which to do so, so he drives out to the wealthy part of town, knocks on the door of the first mansion he sees, meat cleavers the maid, strangles the old lady upstairs, and butchers the family dog! Voila. The perfect place to woo Vera.

But once he's lured Vera back to the mansion (which is now occupied by Muhammad Ali and was used in the last ROCKY movie as Sylvester's pad), she's not all that intent on staying. But like it or not, she's going to stay and Matthew ties her up to a bed post. What ensues are some thwarted attempts at escape and Matthew's deep, deep descent into utter madness.

This could be seen as just another unsympathetic momma's boy on a killing spree flick, but there's enough here to transcend this film into exploitation gold. I've been thinking about it constantly since I first stumbled upon it in an bought of insomnia. How has this movie not been on my radar until now? It's gorey as hell, the killings are brutal and plentiful, Matthew is crazed in the way I like my killer's crazed, the performances are over-the-top, there's a good amount of silly deadpan, Oedipal references abound, there's a total ickiness towards sex, Angus Scrimm is the doctor that figures out something with Matthew's story ain't right (with more dialogue here than he ever uttered in the PHANTASM flicks), and there's an overall hallucinatory and claustrophobic feel throughout that just gets under my skin.

Coupled with a goofy made for TV movie score and blood caked ghoul women hallucinations that become all the more frequent as Matthew gets crazier, this movie rules! Where else are you going to get gems like this, 'Look at this - a steak. Well who else ever bought you a steak before? Nobody, that's who!' And when Vera asks what Matthew sees in one of her abstract messes of a painting, he responds, 'He's been punished by the sun, he's been punished for chopping up the man that took his mother away from him.' Vera replies, 'I didn't know I was such a good artist.'

It's stuff like this that takes the mostly downbeat mood and elevates it to hilarity. There's plenty of humor, especially in Matthew's delivery and performance, that just make you laugh, even though enough blood is spilled and bodies are dispatched nastily enough. It's shockingly done, but hey, this is fucking exploitation movie from 1972! Director Marc Ray nailed it, with a tiny budget and gorilla filmmaking techniques. He went on to direct one more movie, THE SEVERED ARM (what is it with the cutting off of appendages?), and retired from the movie business to become a shrink. Fred Holbert, the kid that played Matthew, was never heard from again and prostitute/mother Vera (Leigh Mitchell) never went on to do anything else again either. Shame, really, as Holbert's performance really does elevate this.

You can watch this instantly on Netflix as CLAW OF TERROR and I recommend you do so right away. Search for the BLOOD-O-RAMA collection. Do it now. Just look at that one sheet. It's reason enough.
Posted by Jenn at 3:47 PM