Reasons Why Sssssss is Fucking Awesome 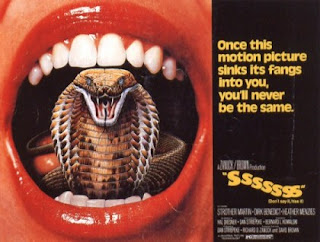 2. There is a carnival/fair/sideshow element integrated into the mad scientist plot.

3. A man is turned into a snake, not only once, but twice (it's two different dudes, sorry if I didn't really word that correctly), and we get to see the results at varying times.

4. Heather Menzie's hair. Seriously, what is up with her hair? It's horrible, but also awesome.

5. It's from the seventies.

6. It's name is an onomatopoeia and how often do I get to say that, both the word 'onomatopoeia' and that a title of a film is one?

7. The man snake looks fucking creepy and rad, even though he's sad because he's in the freak show.

8. All the snake milking scenes (of which there was a certain sideshow quality to as well) were apparently real. That, and I got to use the words 'snake milking' in a sentence and attest to their reality.

9. There's a mongoose, who eventually saves the day, if you count taking down the man-snake and subsequent object of Heather Menzie's character's affection as saving the day, which I do.

10. There's a love plot involving a half-reptile/half-man and Heather Menzies.


The only way this could have been better is if Ray Milland had showed up.

Expound on your Sssssss love in the comments.
Posted by Jenn at 12:32 AM