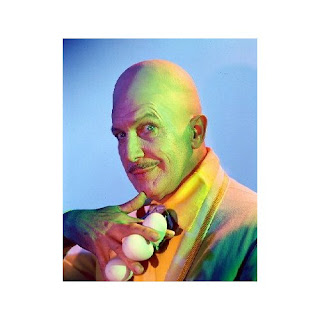 I heart Vincent Price. I especially heart this picture of Vinnie from the Batman series. I vaguely have a recollection of him playing Egghead on the Batman series with Adam West, but no actual episodes stick out. I used to reeeeeaaaallly love watching Batman on syndicated television as a kid. One summer I actually got up early every day to watch Batman and Gilligan's Island after that. I think I must've been around nine years old. I was so fucking pissed when school started that fall and I wasn't going to be able to get my daily Batman and Gilligan fix. It was the beginning of a lifetime of addictions. I quit my Batman habit, it wasn't easy, let me tell you, but substituted it with other things, and now look where I'm at.
Posted by Jenn at 3:49 PM