The Ghastly One: The Sex-Gore Netherworld of Filmmaker Andy Milligan 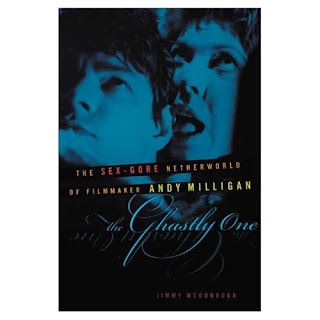 I'm probably the only girl on the planet that received exploitation filmmaker Andy Milligan's biography for Valentine's Day. I don't know many other women that like the kind of movies I do and I don't know a single other person who has even heard of Andy Milligan, let alone want to read his bio. In fact, I'm not too familiar with Milligan's oeuvre myself. But after reading The Ghastly One by Jimmy McDonough (a biographer brave enough to actually live and work with Milligan after hearing all the 'horror' stories after the man, but I'm getting ahead of myself) I'm ready, truly ready, to embark on the long, strange, incest-laden, mysogynistic, and homosexual odyssey known as the films of Andy Milligan. Oh, and there's some cannibalism, too. Can't forget about the cannibalism. And the bestiality. And S&M.
For those uninitiated, Andy Milligan was not a nice person. I can safely say that after reading his bio. He was, to say the least, intense. Strangely, he didn't drink or do drugs, two vices that would consume his friends and colleagues for decades. He had yet another vice, and that was trolling the streets of 1960's NYC looking for anonymous sex in grindhouses, alleyways, and abandoned freight trucks. Betwixt satiating his love of rough trade, he managed a rather prolific output of exploitation and horror films, as well as writing and directing a large number of stage plays, spanning nearly three decades, before his AIDS-related death in 1988. McDonough's book does everything it can to chronicle Andy's life and those that lived, worked, and rode the exploitation train, so to speak, along with him, going as far as moving to California to live and work with Andy, and care for him right up until the very day he died. I don't know of many biographers who go to such lengths for their subjects, but McDonough's book really hit hard in this respect. He obviously had such admiration for the man, he was willing to wipe his ass, literally.
It's fascinating stuff. At times you fucking hate Andy, he's a misogynist, he's a tyrant. His only direction to his actors, Just do it, babe. His themes in his films repeat themselves, the maniacal mother, dysfunctional families, the conniving woman, hookers, drugs, rough trade. The characters and themes of his films mirror his life. Somehow, no matter how much you think Andy is a terrible, and at times, downright evil, individual, people are drawn to him. Just when he alienates a bunch of his friends and actors, a new group will pop up to support him in whatever endeavor he was currently embarking on. It's a strange phenomenon in the bio; street people, drug addicts, male prostitutes, these people were drawn to Milligan and he put them in his movies and stage productions. He'd use them up and a new group would arrive. You know, there are people that there is just something about them, you can't put your finger on it, to sound trite, but Andy Milligan must've been one of these people. His life reads like the sleazy kind of movie 42nd street was so popular and will forever be famous for. And I think that is special. Because I can't think of a better word. Andy Milligan was gross, he had a gross, nasty life, full of abuse, sexual, mental, and otherwise, and became a personal that abused. Yet he goes down in history, well, exploitation history anyway, as a talented artist. Which I have no doubt that he was. There's some interesting commentary on art and artist in the bio, which I have no time to recount because I'm off to work in five minutes. One day I might write a halfway decent, non-rushed review of something here. One day.
But my quickie review is this - this book absolutely oozes with sleaze, sex, and is the embodiment of sexploitation. As much as I sometimes regret being born to late to never experience the Deuce as it once was, this book made me feel safe because I hadn't. Some of this stuff is so sick, you might need shots after reading it, and I have no doubt Milligan's movies will make me feel much of the same way.
Posted by Jenn at 3:32 PM