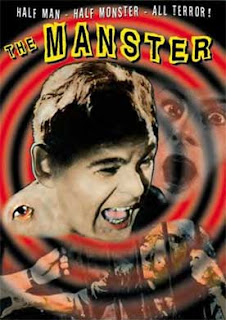 Nothing says All Hallow's Eve like a campy two-headed monster American/Japanese hybrid mad scientist movie from the '50's y'all! So for your Devil's Night reading pleasure, I give you 1959's THE MANSTER.

As we settle in, a hairy, Yeti-ish creature attacks some bathing beauties and another lovely lady in her home as she combs her hair. The women are completely taken off guard by this beast and put up little fight. Roll credits.

Come to find out this creature is/was Kenji, the brother of MAD scientist Robert Suzuki, who lives in a lab-or-a-tory carved into the side of an active volcano. Suzuki being MAD and all has turned his brother into a raving, savage beast, who, up close, is also kind of cute in a fuzzy, raving, savage beast kind of way. Suzuki ain't all bad and realizes that his brother is out of control and winds up incinerating the poor fellow alive. 'You were my brother!,' Suzuki laments. 'An experiment that didn't work out!' Ah well, into the flames you go, Kenji. As Kenji meets his fiery end, we see Suzuki has been up to other 'experiments' as a she-freak screams from a cage built into the wall at the actions taking place before her.

That said and done, Larry Stanford comes to meet with Suzuki. Larry's a reporter with the World Press and wants to interview Suzuki about his 'work on the secrets of 'evil-oo-tion' and 'the principles of existence.' Fascinating stuff, you can totally tell Larry's really interested. NOT. If you missed the whole I turned my brother into a Sasquatch that kills beautiful women and then burned him alive in a giant oven scene, you get the idea that Suzuki is a little weird when he starts asking his interviewer all sorts of personal questions. How old are, Larry? Have you ever been with prostitutes, Larry? I'm paraphrasing, but you get the gist. After a bit of this and some more blather about 'cosmic rays and their effect on evolution,' Suzuki offers Larry some scotch as a means to drug the reporter in order to inject him with an enzyme that will cause him to change into something similar to Kenji, because that all worked out so well just several hours ago.

Cut to Larry's office back in Tokyo several days later. Seems like Suzuki wants to come out of his volcano lab and take Larry out on the town. Larry's been working his ass for what he makes seem like decades, so is more than happy to oblige Suzuki for a few nights out. Larry seems fine at this point. He doesn't know he's been drugged or that Suzuki is a total weirdo, so he takes a call from his wife, Linda, a breathy blond in a white nightgown that still resides in NYC. He assures Linda all is well and he'll return home to New York as soon as he has had his much needed vacation. Asshole. I'd be like, you are taking a vacation with me, motherfucker, since I haven't seen you in years. But oh well. Linda's sated for then.

The doc takes Larry to a brothel where Larry gets wasted and makes out with several ukulele playing geisha. Three days later, Larry's still having the time of his life with the good doctor, and decides instead of returning to work or to NYC to his wife to go to a hot springs hotel with Suzuki and Tara, the doctor's beautiful and seductive assistant. While we haven't interacted much with the doctor too much yet, he doesn't seem as evil as his plans. He just more or less seems kind of regular in that his performance isn't too over the top and at times, he almost seems remorseful about his actions, yet obsessed with his experiments nonetheless. Tara, the assistant, however seems far more evil. She alludes to a shady past the doc rescued her from and her lack of feeling emotions. She's perfect for the job of seducing Larry so the doc can inject more enzymes or serum or whatever the hell in Larry for the ultimate transformations.

It's at the hot springs where the theremin music queues up and Larry feels that initial cramp in his hand. He has been boozing it up quite a bit so decides he'll forget about the whole pain thing and have sex with Tara instead. FADE TO BLACK. (I once took a screenwriting course and the guy teaching the class used to love the whole fade to black thing. He always talked about how dramatic it was to fade to black. He called it a device. I hated that and thought it sounded pretentious. He was also big into starting stories where the alarm clock is going off and using the 'device' of the needle on the record skipping. Annoying. Those pretentious MFAs loved him, though. No offense to my good friend out there with an MFA.)

Moving on, Larry and Tara party it up, dancing and drinking all over the town, but that damn theremin music keeps playing and Larry knows something's not right. He does what any rational, American ex-patriot who's cheating on his wife would do. Drink MORE and have MORE SEX. Why not, right? It kills the pain and makes him feel good. That is until he and Tara show up at his one night and discover boss Ian has ratted Larry out to the missus and Linda's standing there demanding to know the deal. Larry's a total ass at this point (remember, the poor man has been drugged with mad scientist serum so it's not his fault, if that's what you want to believe), and storms back out to Tara's. Linda can't believe how Larry's changed, although if you ask me, he hasn't changed a bit since he was always a bit of an ass. Now he's just more of a drunk ass who is just doesn't know he's about to grow another head. Big deal.

Back at Tara's, she urges Larry to go back and make up with Linda, or at the very least, find some sort of closure and Larry does just that, but winds up growing a monster hand and yelling at Linda. 'I never put you in your place, never slapped you down before!' She exits stage left in tears, as Larry continues to grow hair all over (like another afflicted Larry we know) and then decides to stop by a Buddhist temple. He rambles to the monk, interrupting his chanting and then returns to Tara's for sex of the non-explicit variety. It is 1959, you know.

Not ever sex can stop what Larry's becoming, as he soon takes to hiding in alleys and murdering beautiful women. According to the doctor, who we really haven't heard much of up until this point (it's really more Larry's story throughout), Larry is becoming two species at once. I could make some sweeping generalities about the duality of man but I never really got on board Larry's train, as he was never very likeable. I don't even feel the least bit sorry for him when he does sprout that ugly, ugly second head and starts wreaking havoc on Tokyo, as if there wasn't enough cinematic havoc wreaked upon Tokyo.

Enter the last fifteen minutes of this eighty minute flick. It goes a little something like this. There's some not particularly perilous police pursuits (alliteration, anyone?) of our boy Larry and then some crazy musing by Suzuki. He keeps saying how he's given this great gift to science (a two-headed monster that murders people - some gift!) but he also keeps struggling with how he can't bring Larry back. Larry might already be ready to split into two beings, which would not be a great gift to science, rather a horrible regret. So which is, doc? Are you great or do you regret the shit you've pulled in the name of science? Did I mention the she-freak locked in the volcano lab was once the doctor's wife, Ineko? At least I can find some solace in the fact that Larry was a complete stranger to the doctor and not a family member he decided to experiment on.

Larry returns to the volcano and guess what he does? Go on, guess! Ok, he trashes the lab, kills the doc, takes Tara, throws her in the volcano, splits out the monster part of him, fights the monster, the police descend, the monster falls into the volcano, Linda and Larry live happily ever after. The End. It was that easy; I'm serious. That really is the end and it happens in like forty seconds.

I kind of liked THE MANSTER. I still love the title. The movie isn't bad, per say; it isn't good either. It could have included more MAD science for my money but the doctor is so wishy washy, I don't know what the hell he's rambling about most of the time. Do you, or do you not, believe in what you did? If you're a fucking mad scientist, you have to OWN that shit. Wring your hands, sweat a little, order your hunchback around. Make sweeping statements about how you are GOD. Don't back peddle and regret your damn mistakes, because there will be a few if you practice science of the mad variety. Larry sucks all around, both as nice guy Larry and asshole Larry because they're really one in the same. He's whiny when he's nice and a dickhead when he's mean. That made sense only to me. Tara is beautiful and calculating, but even she has a duplicity when she falls in love with Larry, which is completely outside her character. Linda's a stupid bitch for taking Larry back in the first place. I mean, who knows if he'll cheat on her again or if he'll grow another head. Maybe she's just hoping he'll grow some other appendage instead.

THE MANSTER is recommended for it's short running time, awesome title, and other silliness.

Happy Halloween, you perverts. I love you and have missed you all! Have a great, safe Halloween whatever you do! It's always Halloween to me!
Posted by Jenn at 12:24 AM