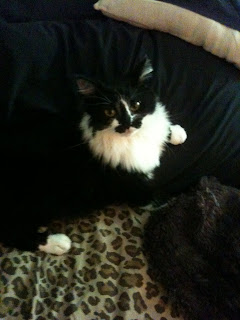 Meet the newest addition to our family! I would love to formally introduce her, but Sam and I can't decide on a name. She's a kitler, so I was thinking Eva, but it might be unwise to name her after Hitler's lady. Secondly, I was thinking about Glenn, after Danzig, but also after the Ed Wood title GLEN OR GLENDA. But Glenn isn't really sticking. Then there's Lily, like Lily Munster, but Sam doesn't like that at all. Bruce's cats are named Lydia and Leona, which I like a LOT, but his cats are already named that. And while I suggested Adrienne and Linnea after two of my favorite scream queens, Sam's not sold. We can't agree on anything! Help me out, guys!

She was named Shioban when we got her this morning, but that isn't 'horror' enough! She deserves a 'horror' name, or a 'punk' name! I know, I have a Moochie, which is neither, but then, he's totally a Moochie.

Thanks for your help!
Posted by Jenn at 4:38 PM