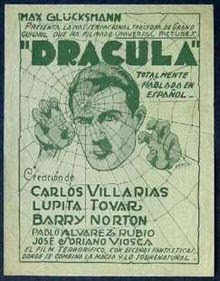 Richmond holds an annual film festival each April. The festival doesn't tend to focus on any theme or genre - they'll have a night of short films from local universities, or some independent work, maybe a reading or two thrown in. Once every couple of years, however, they'll screen a thing or two that peaks my interest and this year I was delighted to find out they were screening the Spanish language version of DRACULA with a live soundtrack AND a rare 35mm print of THE NIGHT OF THE HUNTER. On the same night! Yay!

Movie the first - DRACULA. The introduction wasn't anything I didn't already know - the film was shot at night on the same stage as Tod Browning's film, the long shots of Dracula aren't Carlos Villar, but Bela Lugosi, a money-saving maneuver - but the highlights included seeing this old film on a big screen in a theatre with an audience AND musical accompaniment by guitar whiz Gary Lucas.

On the musical aspect. Lucas, looking cool in a purple fedora and loose fitting grey suit, took the stage after being briefly introduced as a performer with Captain Beefheart. He said a couple of words and the film started rolling. He played along with the DRACULA theme song at a little too high a volume, so I wasn't sure if I was going to be able to concentrate on subtitles. It really was that loud. But after the credits, he toned it down and I was immediately sucked in to watching the movie, almost tuning out Lucas as he played along. He's that good. You don't even realize you're hearing something performed live.

The only time I was sentient I was watching a live performance along with the film is that some of the music is slightly anachronistic. There's a Spanish feel to some it, a rock n roll feel to other parts, with softer notes played with women are conversing on screen. He also switches between acoustic and electric depending on the action, which is pretty cool. It updates the film in some ways, but you are still aware you're watching a movie from the Thirties. It's a weird feeling, but not a bad one. 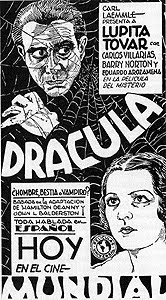 On seeing DRACULA with an audience. I've seen this version of the film many times and often pair it as a double feature with Bela Lugosi's version. But this was my first time with a theatre full of other film fans and it was a little annoying, even though it is interesting to see how different people react to certain films I myself am very familiar with. Yes, the movie is stagey and akin to a stage performance, because it originated as such. Yes, it's eight decades removed from our current movie watching brains. And yes, sometimes it's hokey. But it ain't all that fucking funny. You would think people were watching stand up or something the way they were guffawing at Dracula's facial expressions. I think a lot of times people don't know what to do with themselves when they watch something old or removed from what they are used to. Laughter is their way of dealing with it. I've seen it happen with all sorts of films, usually films that are a lot more 'shocking' than this one. Overall, it was cool to see this on a big screen, stupid laughter from stupid people aside.

And, I never realized how much I love Renfield. It really is his movie in a lot of ways, at least this version. I love watching him go nuts. It's easily one of the best performances throughout the movie. And he gets so much more screen time than Dracula. It would seem he upstages the cloaked one in many ways. 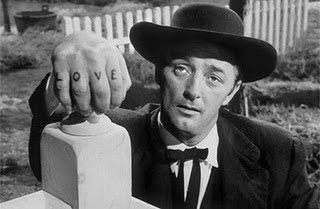 Movie the second - NIGHT OF THE HUNTER. Charles Laughton's first and only feature, the wonderful melodrama starring Robert Mitchum, is easily one of my favorite noir pictures. I was delighted to be able to see this on a big screen in 35mm! This feature kicked off with a reading from the novel by Minnesotan author and film fan, Peter Schilling, Jr., appearing with fake LOVE/HATE knuckle tattoos. It was a cute gesture, but kinda weak. This is a dude wearing a navy blue blazer and those little wire-rimmed glasses. Oh well. I'm like, shut up, get to the movie.

On seeing this with an audience. The audience here was more reserved. Everyone was respectful of the film and there was the occasional giggle, but overall, this was a more somber affair than most. Preacher Harry Powell is just so damn evil! You can't take your eyes off him. And Pearl is just so darn cute. I don't like kids, but I would cuddle Pearl in a second. 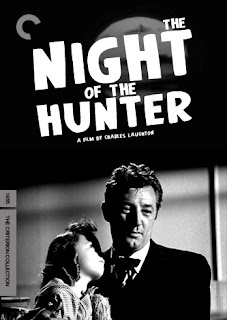 On the movie itself. It's been years since I've seen this and only ever on VHS. I feel like I paid a lot of attention this time (I was also stone cold sober, hehe). You know how it is. You can see something over and over and then like the tenth time you see it, you pick up on stuff you might have missed. This time I was hyper-aware of the kids and their mistrust of the adults. I'm not saying I missed this entirely before, since it is overt, but I really felt for those kids this time around. They loose their dad, which they get to watch, they loose their mom, the other adults are drunk or unbelieving - there's no one they can trust. And while Mitchum's Preacher is what the film is most memorable for, the kids are really what carry the movie and who you feel for. It's just such a painful movie, in that you feel the same pain and really, really want to see Preacher get what's coming to him. I need to read the novel. I could only love it.

It was so fantastic to be able to see these two old films in a festival environment. To go to two different amazing venues in my city on the same night and watch two of my favorite films is what I want every day to be like. Richmond isn't the roaring metropolis it should be and these things just don't happen on the regular around here. I'm glad I got to be a part of it this year. Here's to more genre offerings in years to come! Yay!
Posted by Jenn at 12:10 AM