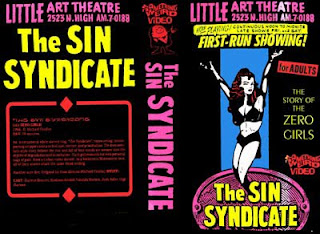 Dolores is a half-Cuban/half-Chinese curvy brunette burlesque dancer who gets picked up by the mafia to become a stripper. She's raped in Cuba and sent to the states to become a hooker. "I didn't know I'd already been bought and paid for."

Lorna (oh, how I love the name Lorna - it's so tough sounding and you never hear of anyone naming their kid Lorna) is an American girl next door type who got 'caught up in a party girl lifestyle.' Before she knew it, she was being raped for two days before being sent to the 'Syndicate' for prostitution.

Candy was left an orphan in London after the Blitz. She was only three days old when her parents were killed. She spent the next eighteen years growing up in an orphanage and even considered becoming a nun. She left the convent at 21 and became a secretary and fell in love. Her first sexual experience is in an apartment inexplicably decorated in an African motif and soon after this, she meets the mob boss and becomes a Zero Girl.

Monica met the mob boss on her wedding night when she was just nineteen. Her own husband made her a Zero Girl, introducing her to the life when they were supposed to be on their honeymoon. Instead of a romantic evening, Monica was forced to strip nude in a room full of strange men and then hook up with another Zero Girl while the men watch.

We get to watch as these women strip and fuck their way into complete oblivion, with no possible way of redemption. But after what they've subjected themselves to, what redemption could be possible? Dolores narrates, 'You've seen us before. You've seen us on every street where pretty bodies are an easy mark with a price. To the rackets, we're Zero Girls. Nothing. Zero. We're all owned by the syndicate, body and soul. Or should I just say ‘body,' because after a few nights you can't remember being a woman or ever having a soul....'

THE SIN SYNDICATE is Michael Findlay's first feature (possibly - there are no known previous efforts, but who knows, he was prolific and film didn't get stored properly way back when) and treads familiar Findlay territory in it's overtly women hating overtones. The film is is essentially an exercise in how four women's soul's are eradicated by a life turning tricks, BUT it's no where near as appalling as some of his other efforts (THE FLESH TRILOGY). And while this might seem an understatement, coming from a film where the very first scene is a woman being strung up and tortured, Michael is just getting started (this is the early 60's and the Findlay would have two more decades to explore his depravity, alongside his equally cracked wife, Roberta, who credits herself with being the first female pornographer). I'd call this a warm up for his later completely revolting efforts in sickening viewer with misogyny, rape, torture, and an overall hatred for all of humanity.

So, if you like that sort of thing, you know, a supreme hatred of EVERYTHING and EVERYONE, and you dig some vintage sleaze and burlesque alongside your rape and torture, look no further. The girls are beautiful in that retro sexy way, curves and cat-eye makeup, and while all are obviously amateur actresses, they seem to elicit some sort of sympathy by the end. The dudes are just that sleazy.

There's also some weirdness - the film stops abruptly to give us stock footage of the Blitz, the Cuban revolution, and even more inexplicably, a battleship being bombed! There's also a strange sequence where the screen goes completely black, three cots are illuminated, the girls are being pawed at by thugs, while Dolores strips on stage. It's extremely stylized. Gotta class it up for those refined perverts sitting in the theatre jacking it to this. Because you know that's what they did back then.

And if this has taught you anything, let it be this - 'wherever there are men, there will be Zero Girls!'
Posted by Jenn at 10:33 PM