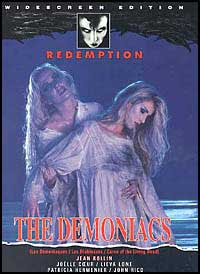 I swear to you I didn't have a single cocktail last night while I was watching Jean Rollin's The Demoniacs (1974). Not one. Not even a glass of wine. I don't have a fever or anything, don't get too worried about me, I was just hungover from Sunday night and decided to dry out for a day or two. I'll be back to my regular shenanigans by at least Wednesday. So it wasn't liquor, it was Rollin that left me with that stoned, nonsensical huh? feeling normally wrought by substance abuse. Allow me to explain.


As the movie opens, we meet the shipwreckers, a group of rough and tough dirtbags that purposely draw ships to the coastline so they'll wreck and they can salvage the goods. Hey, it's a living. Amidst a background of a burning ship, we are introduced to the Captain (John Rico), Le Bosco (Willy Braque), Paul (Paul Bisciglia), and the absolutely gorgeous Tina (Joelle Coeur), the most ruthless and naked shipwrecker of them all. One dark and stormy night, the shipwreckers are out on the coast going through some booty when they see white-nightgown bedecked blonds wandering in the wandering. Rather than help them, they rape and brutalize them while Tina and the Captain get into some naked situations on a giant rock. Why the stunning Tina fucks that nasty old Captain is beyond me, I know he's their leader and all, but really, Tina should be the leader, she's the most charismatic, mean-spirited, and energetic of every character, but whatevs.

We don't find out much, if anything, about the two blond girls - like who the hell are they? What the hell are they doing in the water in their nightgowns in the middle of the night? What's going on? It's around here that I started to feel like I might have a buzz. And then it gets more convoluted. Do the shipwreckers kill the girls? It would seem so - they are brutally assaulted and hit in the heads with rocks after they are raped. Christian and I were divided on this issue - he kept saying the girls were still alive, while I was certain they were dead.

Case in point - after the cut it's the next day and the Captain and crew are enjoying some hookers and spirits in brothel/bar decorated in a most macabre fashion. Seriously, I would drink at this bar every day of the week - think baby doll heads with wings on each booth, a giant taxidermied bat on the wall, some sort of weird black glowing mothman type statue, monkey skeletons, and papier mache sculptures of women giving birth. And it has a nautical type theme running through it as well. I think I might be redecorating my house to look just like this. Anyway...Captain and crew are getting loaded and the Captain sees (?) hallucinates (?) the blonds with pale faces and blood all over them. Is he cracking up or are the ghosts of the girls they killed back for revenge? Hard to tell because no one else seems to see them, but the bar proprietress, Louise (Louise Dhour) is also some sort of prophetic and alludes to the Captain's illegal activities and some of sort of village curse. After that, the Captain goes on a fucking tirade and challenges the ghost girls to a duel. Then Louise composes a piano piece about the situation and a devil gets released form the haunted ruins because of all this madness.

My notes keep saying Are the girls still alive? I still don't know. Why Christian and I argue about that, the shipwreckers go the abandoned ship ruins and try to flush the girls out with a fire but they escape and set back out to wander through the water. They seem afraid of the fire and cough as noxious smoke fills their lungs, but I still think they're dead. Tina almost meets her fiery death and then decides she really wants vengeance on the girls. The Captain tries to calm her, but with no use.

Okay, I know this all seems pretty tame, if not sort of jumbled and confusing, but then it turns another shade of WTF when the girls wander into a garden the next day after the ruins fire. They happen upon a red-wigged hippy clown who leads them down an ancient stone staircase and through another garden to a bearded fellow while a pan flute plays. Beardo admonishes the clown for bringing the girls here - she wants to keep them and take care of them - and he instructs her to find them a place to rest and he'll deal with the situation later. Seems Beardo has a devil incarnate locked in a cell with whom he discusses the girls' innocence with and also discusses an apparent destiny which will be fulfilled. The devil dude kinda looks like a seventies version of Criss Angel meets Siegfried and Roy mashup and is every definition of sleazy gross. More on him in a sec.

The clown, who is dressed like a clown to keep villagers away (that's what Christian said anyway, I think I was up feeding a cat or getting a glass of gingerale or something when she explained why she was done up like a clown, which is seriously lame, because I would have rather just had her as a clown, no explanation, nothing, because it's just better that way - to have an arbitrary clown), gets the girls some new tunics and lets them draw skulls and crossbones in the dirt. Then we see the Captain back at the bar starting to have sweaty revenge fantasies while Tina models some lingerie for him. Non-plussed, he thinks the girls are back from the dead to haunt him and he yells at Tina, 'you don't believe in ghosts! You're nothing but a trollop!' Then he strokes a taxidermied seagull while Tina cups her breasts. They then have energetic sex on the bed but the Captain fails to actually remove his pants.

The girls get nakey (funny, they don't look nearly as identical when they're not wearing those nightgowns or tunics) and the devil guy tells them he'll give them his powers for one night to take revenge on Captain and crew. Guess how he gives them his powers? Go on, guess! You get three; the first two don't count. I'll give you a hint - it involves seeing his naked hairy ass. Yep! He has the el sexo with them. Then it turns into a bad joke with no punch line. Two blonds with all the Devil's power walk into a bar...and stare at the patrons 'til they all leave. Louise sees them and offers them some grenadine and Tina comes down some stairs and sticks Louise with a hatchet and the girls and Tina both leave. The girls and Tina find themselves in a statuary garden and the girls telepathically get a marble Jesus to fall on Tina to smother her? Fuck her? I'm not sure what the point is, because Tina gets away and runs off into the night. The clown staggers in for an epic death scene but doesn't really die (Who dies?! Who is really dead!? Someone offer me an interpretation I can comfortably accept!) and there's another heaping dose of convolution, some more rape, then a few monk types show up and everyone drowns.

The dead(?) girls are troopers, I have to give it to them. In practically every scene, they are tortured, beaten, forced to walk around either naked or at least without shoes, half the time in water - they've totally got the beautiful women in peril thing down to a science. The bar is decorated in the way I've always wanted my local watering hole to look, and all the guys are effectively skeezy and gross. Once you get passed being annoyed that nothing really makes any sense and the fact that I never figured out who was dead when where and why, this ain't bad. In fact, it's hilarious and weird and all the girls wear fabulous blue eyeshadow and red lipstick that don't go together at all. As much as I like being drunk as a monkey when I take in my usual cinematic fare, this one is drunkening enough on its own. I actually felt with all the stuff that Rollin left out, that I was watching it at least in a half-stupor.
Posted by Jenn at 10:24 AM