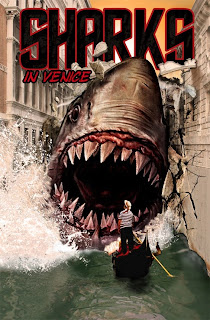 If this sounds like some sort of hackneyed Indian Jones 'to do' list, you're right, in that it's Stephen Baldwin's 'to do' list in Sharks in Venice. See if any of this sounds vaguely familiar: adventurer professor Dr. Daniel Franks (Baldwin) is summoned to Venice from his cushy teaching job at University because of a 'propeller accident' involving his adventurer professor father. Upon finding dad's apartment in shambles from someone searching for the late Dr. Franks' notes on sharks and Medici treasure, Daniel sets out to find out who or what killed his dear old dad. Seems he has some of the same spirit.
However, it seems some stock footage of great whites is stalking the canals of Venice, put there by the mob boss Clemenza, so divers won't be tempted to look for the Medici treasure. Actually, it's a combo of stock footage and a plaster looking orca (for the close up attack shots) stalking the canals of Venice, if you want to get technical. And by Venice, I don't mean Venice, Italy, I mean, that hotel in Vegas that you can ride the gondola through, computer generated images of Venice, and a sound stage in Bulgaria.
As menacing as all this sounds, Daniel, being the great adventurer professor he is and like his father was, finds the Medici treasure no problem, of course attracting the attention of Clemenza. (The scene where Daniel finds the treasure is strait outta Last Crusade - complete with booby traps, cobwebs, triumphant music, the whole thing, but instead of being pursued by Nazis, Daniel is pursued by great white stock footage.) He takes a cheap looking emerald to prove he's found the treasure and jumps back into the water, barely escaping with his life.
At this point, I was a little disappointed because we are yet to be treated to giant CGI sharks attacking people in Venice or sound stage in Bulgaria, whatever you want to call it. (I guess Sharks on Sound Stage in Bulgaria isn't as compelling a title as Sharks in Venice.) I won't be disappointed for long, though, as the movie (sort of) delivers, with three or four cheap looking digital shark attack effects. I mean, seriously, this is why I watch these types of movies, for the cheap CGI, not for stock footage of great whites, which I can see on the Discovery channel. But where can you see a whole CGI city? There are some scenes of Venice exteriors that are completely computer generated. I think it would have been easier to just spring for the actual trip to Venice and then CGI the shark in, rather than the other way around. But I'm not a stickler; it really just adds to Sharks in Venice's cheapie charm.
Anyway, Clemenza offers Daniel two million bucks (Aren't they in Europe though? Shouldn't it be euros?) to go back in the shark infested canal and find the Medici treasure again. Well, being a mob guy, he doesn't really offer, he more tells him he has to do it or else he'll kill his girlfriend, medieval history professor adventurer Laura. Sparing you the details, Daniel follows through, natch - he's a great professor adventurer, and Clemenza gets fed to the plaster orca and everyone hugs and gives each other kisses and calls it a day It's all wrapped up nice and neat, we breathe a collective sigh of relief that the canals of CG Venice are now safe, credits appear, and then, BAM! a shark attacks a gondola! We're not safe after all! Stephen Baldwin failed us again! If I had a nickel for every time someone's said that....
I might not be a great professor adventurer like Stephen Baldwin, but anything involving giant CG sharks is at the top of my 'to do' list.
Posted by Jenn at 9:29 AM