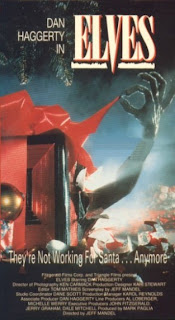 Twas the night before Christmas

And all through the town


Are about to get down


I did not make that up, although I wish I had. This is actual copy from the back of the Elves (1989) box. Actual copy, people! I think I derived more pleasure from looking at the box and reading the description than I did from actually watching the film, although I did highly enjoy the movie, even though I was tired and it seemingly would not end, despite the fact it has an 89 minute running time. Looking at the cover and reading the description of Elves, I mused aloud, 'why would anyone want to get rid of their copy of this movie?' Probably because they have too many copies already and felt the need to bring a copy into the life of some less fortunate individual that already wasn't privileged enough to own one. Yeah, that had to be it.

Look no further. Elves is your movie, that is, if you enjoy the following:

1. Elves genetically created by Neo-nazis as the ultimate fighting machines because of their magical element. Magic = can't be harmed or killed. Sounds pretty obvious.

2. Dan Haggerty (Grizzly Adams*) as a chain-smoking, feather-haired, down-on-his-luck ex-detective sought to save the world against elf domination.


3. Incestuous situations involving father/daughter relationships for the sole purpose of impregnation so that offspring (lead character Kirsten) can be the perfect genetic specimen for elfen sex to create a Fourth Reich and perpetuate the master race. The father/grandfather is a wheelchair-bound, German-accented ex-Nazi who uses the word elfwooten on more than one occasion.

4. Many scenes filmed in 'elf vision.' These are scenes through the eyes of the elf, natch. Think a moving frame with a constant star wipe filter effect applied repeatedly.

5. Gun stores in malls. Never in my life have I been in a mall that housed a gun store. I always thought this odd when watching Dawn of the Dead, as well. Seems I read somewhere that those scenes in Dawn of the Dead that were in the gun store were shot at an actual gun store somewhere else in Pittsburgh, not one that was actually in the Monroeville Mall.


6. Speaking of Dawn of the Dead, more movies that rip it off. Elves does so when a suited Nazi type says, 'When there's no more room in Hell, elves will walk the earth.'

7. Toys and Christmas decorations that confound an elf, but don't stop them when it's time to don a Santa hat and get stabby.

9. Dumb bitch ice queen mother figure who kills the family cat by drowning it in the toilet. Regular readers know that animal cruelty is something I am particularly squeamish about in my horror movies, especially when involving felines, being a crazy cat lady and all. So this is particular scene is not on my list of things I like to see in my movies, but it does much to illustrate how fucking horrible the mom is and really make it so you want her to die. Which she does. But later than I was hoping.

10. An elf being called a faggot. When Kirsten sends the elf back to Hell or wherever, she says, See you in Hell, Faggot. Yes, she calls the elf a faggot. Weird, I would have gone with motherfucker, personally, albeit that's a bit cliche.

Yes, I know, it seems flawless. However, the following are some concerns voiced by the audience during last night's screening (the audience consisting of Christian and myself and the screening taking place in my living room):

1. The title is misleading. From what we could tell, there is only one elf, singular. So the movie should have been called Elf. Being as how it was made in 1989, it would have preceded the Will Ferrell movie of that same title, so it would have been cool to just call it Elf. I guess it alludes to the Fourth Reich consisting of plural elves later on, but still.

2. The elf uses guns and knives to kill. It's a mean lookin mother too, so it would likely just use its claws and teeth. We were forgetting, of course, that the elves are trained as soldiers, so their use of weapons then is justified.

3. Kirsten, the perfect genetic specimen to give birth to the new world order, has a little brother. Is his grandfather and father the same wheelchair bound Nazi weirdo too? It would explain his tendency to spy on Kirsten in the shower.

So really, all concerns are alleviated, given the context. Except for:

1. There is no gratuitous nudity.

2. There is no gratuitous sex.

3. There is no reason for there to be a lack of gratuitous nudity and/or sex, given the time period in which this film was made and subject matter this film contains. Lack of these elements = disappointment.

4. There isn't really much 'true meaning of Christmas' bullshit, which is odd (there is a little in the beginning), but it's not really a Christmas movie persay, it's just set while Christmas is going on. Unless of course, you account for the fact that the elf must get his seed inside Kirsten on Christmas Eve at the stroke of midnight.

So the next time you're about to be inseminated by a Nazi elf and he stops raping you to offer you a cockroach to eat before eating it himself, stop and think about the true meaning of Christmas, would you?


*There's a guy that comes in my restaurant who we call Grizzly Adams. He looks just like him, except his hair isn't as perfectly coiffed, it's more frizzled. He comes in and gets a filet mignon cooked well and drinks an entire carafe of chianti at like 11 in the morning! He's pretty nice, but he'll sit at your table for like two hours, drinking and reading at the height of lunch rush and then leave like two bucks on a twenty-something check. And he says, Appreciate it, appreciate it every time you bring him anything. I don't think he's ever had to defend the world from the nazi elf invasion, though.

**Mrs. Claus comes in to find Santa's body all murdered and shit and his coke laid out in nice lines on the table. She doesn't take his coke and leaves it for the police to just lock away in evidence. Come on now, Mrs. Claus. You could have sold that coke to kids coming through Santa's magical village, or at the very least, used it to party with yourself later.
Posted by Jenn at 11:00 AM