Requiem for a Vampire 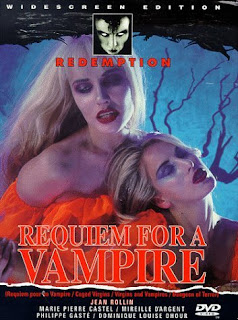 Normally, despite my appetite for weird world cinema and my penchant for hot ladies doing despicable things in the nude, I'm not the connoisseur of Jean Rollin's films, at least, not like you think I would be. But the stars and the planets aligned the other night and I wasn't drunk as monkey and I managed to sit through what is described as Rollin's most palpable fair, REQUIEM FOR A VAMPIRE. And I wasn't disappointed. There might be something to this French dude after all. And after YEARS of suffering through his stuff. Well, not complete suffering, because I do keep coming back to his oeuvre, but maybe you know what I mean. I usually get 'it' right away, here, it's taken some time.

The film opens with two female clowns and a male counterpart in the midst of a high speed car chase/shootout in the French countryside. Dude man gets shot and the trio escapes on a dirt road. Exiting the vehicle, our two lovely clown ladies light the car on fire, leaving their male friend inside. They're fleeing from something, but what? There's some great shots of the car burning, hearkening my love the Divine aka Babs Johnson's trailer burning in PINK FLAMINGOES. It's that slow burn, filmed from many angles with only the sounds of the flames lapping at the metal that reminds me so of my beloved John Waters film.

After having dispatched with their 'friend,' the clowns walk across a field and find a stream to clean their makeup off. It seems almost like a purification ritual or a rebirth, a theme that will make itself apparent as the film wears on. They soon find an abandoned farmhouse and make use of it to change from clowns into regular sexy girls. They find their motorcycle safely hidden within a grain silo and off they head to seduce a hot dog stand owner in order to rob him.

After the robbery, the girls, a brunette, Michelle, and a blond, Marie, flee to a cemetery to cuddle with one another underneath their clown garments as two gravediggers approach to dig a grave. The wind howls, a cat meows, and Michelle falls into an open grave as they attempt to flee a second time for no real reason. Marie watches in horror as her friend is buried alive, however, the gravediggers, being a lazy sort, don't fill the whole grave before quitting time and Marie is able to pull Michelle out virtually unscathed. Although it is filmed very dramatically, with her hand reaching out of the grave and the score edging the whole thing on.

A storm begins and Michelle recovers to faculties on a grave (there is nothing sexier than some pretty girls amongst Gothic looking tombstones) and it's time to flee again, this time to a castle. And did I mention the bats? They assault the girls and they are glorious. Almost as big as fruit bats and I didn't think fruit bats made their rounds to the French countryside. These fuckers are huge! And glorious! You know how I am about bats!

So the ladies find a castle and decide to explore it wearing their clown suits, until they find a bed ensconced in furs and decide to disrobe. If you were thinking Michelle and Marie were a couple up until this point, the next scene confirms it for you, as they get all nakey and kissy with each other on top of the fur bedspread. Don't get your hopes up too long, perverts, as the softcore lesbian action doesn't last too long because the girls are distressed by a creaking sound off in the castle somewhere and get up to investigate, wearing clothes, unfortunately.

Much to their dismay, they find a hanging corpse in the basement (the film's only real gross-out gag) and decide the time has come to flee again. But they can't. They enter a chapel where some robed skeletons are presiding over a funeral while eerie organ music plays in the background courtesy of a fanged red head dressed in androgynous foppery. She pursues the girls into a dungeon and emerges from the floor in an great green filtered light. Into another chamber they run where three burly male guards rough them up - and this is pretty heavy stuff just shy of rape - but the vampiress 'saves' them and tries to drink their blood.

Up until this point, and this is where the 'action' really starts, it's virtually free of dialogue. There's no motives, no explanations, and Michelle and Marie are experts at running from something, anything. But the whole damn thing is so damn good looking, you can't help but look away. There's bats, tombstones, crypts, crazy lighting, androgynous vamps, sexy clowns, I mean, who needs an explanation, right? The atmosphere is so heavy and the girls are so attractive, we can just let go and let that take us where it needs to.

Which is nightfall. The girls have 'escaped' and are wandering once again around the cemetery when the vamp and her thugs catch up to them and introduce them to the count, a pathetic excuse of count if you ask me. Christopher Lee he ain't. And he's whiny. He puts some bats on each of them, to mark them I guess, and lead them back to the castle (they're in a trance?). They are shackled to the walls with some other sexy ladies who have seemingly been there awhile.

Here's where you get your boob fix and there's a little bit of ex-sanguination from the lovelies chained up in the dungeon and we also get a bit of back story on Michelle and Marie, finally! Seems they were at a New Year's party when they picked up dude that was in the car with them at the beginning, but they had to kill him because he was, at their phrasing, annoying. Since then, they've been roaming about the countryside tyring to escape the law. It's honestly welcome because it makes it one of the more linear Rollin films I've watched, and I've watched my share. But I'm totally enthralled at this point so it wouldn't matter if the vamp demanded back story or not.

So what happens next, in brief, is that the girls are forced to become the vamp's bitches. They are to lure unsuspecting travelers to the castle by day so the vamp and the count can feed and eventually, since they are both virgins, depending on what your definition of the word virgin is, they will become vampires if they do a good job. Well, Michelle's down, but Marie's not, and she gets turtleneck wearing Frederick who just happens to be passing through, to deflower her outside the castle's gates so she won't have to become a vampire after all.

So come time for their initiation, aka the rape aka the rebirth, the vampires realize Marie is no longer a virgin and get pissed as holy hell. There's a great scene in here where Michelle is 'forced' to whip Marie as she's chained to the ceiling, a total scene for the perverts and I loved it. Michelle doesn't want to whip her friend and lover, but her vampire nature is taking over and she relishes it as much as she reviles it. And it's filmed in that great green filtered light again. Beautiful! Well, as beautiful as a gorgeous brunette French woman whipping another gorgeous blond French woman chained against her will can be, which is very!

Turns out though, the kindly count is sick of his lot in life and doesn't want to be a vampire any more. He's dying and wants to deny his nature. The count takes the vampiress, and another lackey with him (I couldn't ever discern if this other older woman was an actual vampire or just someone who played the piano and wandered around the castle kind of like a house mother) into a tomb and they retire and the girls run off into the woods and FIN.

Now, this ain't perfect, but it is exquisitely gorgeous, the lighting is grand, Michelle and Marie couldn't get any sexier and the landscape is superb. Not to mention, these are some tough women in this story. Not only in the vampiress androgynous and drag-queen-esque, she's powerful and demands respect. Michelle and Marie are awesome in their own right, as they fight for what they want, flee when they feel the need, and dispatch with an annoying male for the sole fact that he was 'annoying.' I love it. The poor count - he hates what he's become and basically is at the mercy of the women around him. I found this whole element to be quite great.

As mentioned previously, I think this is one of Rollin's more accessible works and while I hate to cater to the masses or lump myself in with them, I must say this was one of my more enjoyable romps into Rollin's filmic endeavors. Here - watch the trailer and perhaps decide for yourself.