Adventures at the State Fair 2010

I woke up Friday morning to my girl, Casey, texting me. Get up, let's go to the fair, she said. Okay, I reply, sounds good. I'm under-exaggerating (is that a word?) In fact, it sounds freakin' fantastic! In case you didn't know or didn't read last year's fair post, I love the motherfuckin' fair. So I shower, coffee, and rouse Sam from sweet slumber. I couldn't wait! I got so impatient, I was waiting in the car in our driveway while Sam got ready. Then, on the way to Casey's I yelled at all the cars and stoplights in my way, because, goddammit, I'm on my way to the fair! In case you can't tell, I love the fair. I said it once and I'll say it again.

We were were there for almost eight hours. I am still tired and I still feel fat from consuming numerous fried items, but it was worth it. It only happens once a year, for crying out loud! The following are many of our adventures. Stay tuned all the way through for comments and comparisons to last year's fair.

This year, there was bonafide ten in one! I remember back when I was a kid, there was a ten in one and it got me started loving all things carnie way back when I was ten years old! And I was super pleased to find that many of the acts were the same! And the fire eater and sword swallower was the same dude from twenty years ago! He's also the human pincushion and we paid the extra two bucks to watch him stick pins all up in his skin. And I was lucky enough that he let me pull them out! I thanked him for his performance and told him how I had seen him twenty years ago. He was humble and ingratiating and that totally made the experience for me. Here's some of our pics from midway. Oh to have those banners! 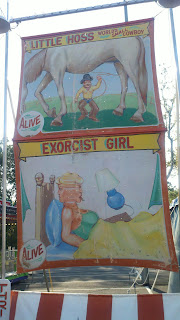 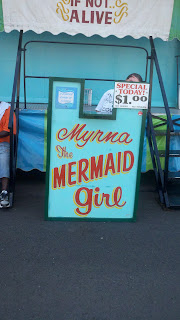 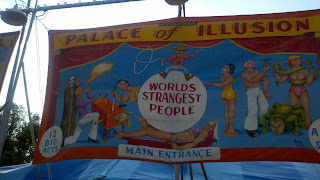 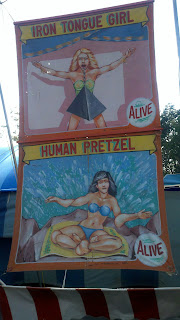 The mermaid girl was back and there was also a gorilla girl. Both of those attractions typically prove to be lame. The mermaid girl is done with mirrors, kind of a fishbowl effect and the gorilla girl is also done with some tricky mirrors, but at least she does jump out at you at the end. We didn't partake but the banners and fronts are pretty nice. 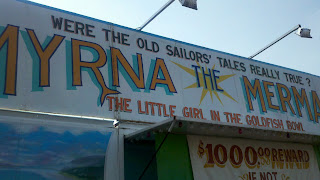 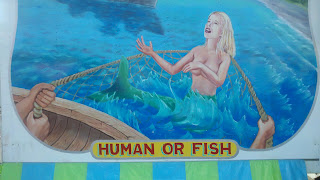 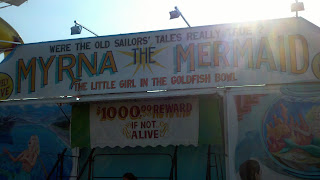 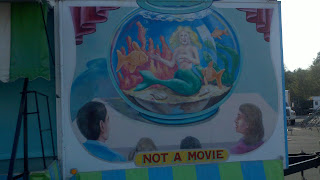 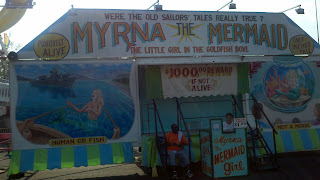 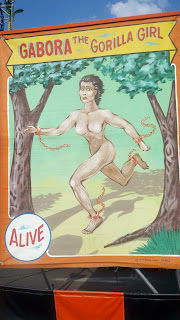 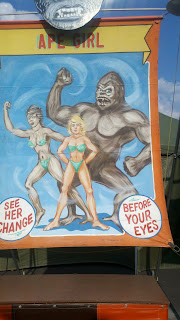 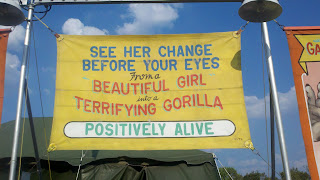 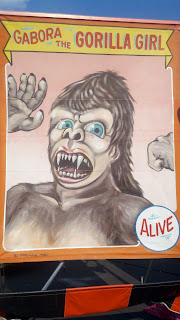 It is so wonderful to go to a fair with a sideshow presence. It's a dying art form and one of my favorites, so this was such an amazing highlight for me. Yes, the stuff is lame and there isn't an appreciation for it from many audience members, but it is so heaped in tradition and there is something punk and free about it that I absolutely love. I'd join a carnival in a second if the opportunity presented itself. 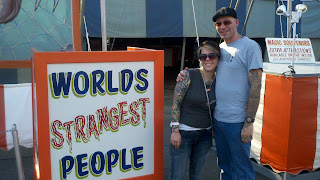 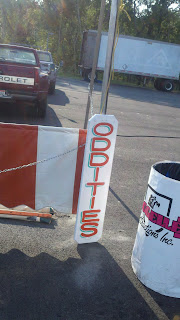 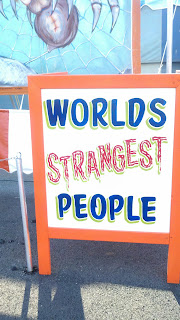 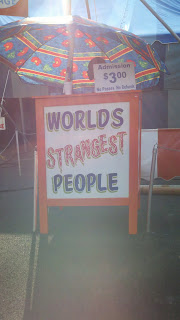 Next up, the rides. Casey and I opted to ride the rickety old rides this year, while Sam held our purses and took ridiculous video of us. This pretty much sums up our experience, although we road just about everything. Except that one that spins you around and drops the floor out. We watched it for a moment and then decided we needed another beer. 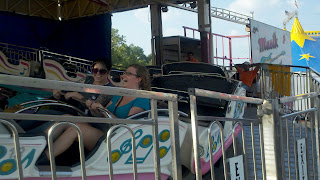 I was crushing Casey the whole time and laughing so hard tears were coming out of my eyes and wishing the whole experience would just end. And we paid twenty bucks each for this.

We also saw a magic show, complete with white bunny rabbits and doves materializing out of thin air and lots of tricks with boxes on wheels. We checked out goats and met this little black pig, which almost makes me want to stop eating bacon. 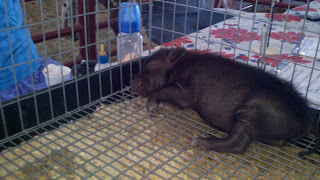 I was most disappointed there were no giant pumpkins, steers, or horses, like from last year's fair. But the midway made up for most of that. And Casey and I got to do our best Patrick and Sponge Bob interpretation: 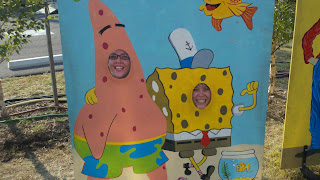 And then I got to do my best Faye Ray: 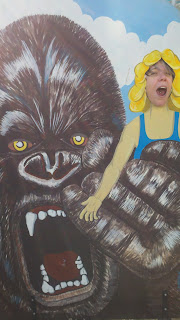 It was a really excellent day and when we were at work the next night, bringing people bullshit and basically hating our lives, I was like, yesterday was much more fun that this. And it was true.

I didn't get my alien sandwich like last year, but I did have shrimp on a stick again, as well as sausage and pizza. The funnel cake was disappointing, but I did get some ghetto fabulous door knocker hoop earrings that say 'I love you' inside for some reason.

Til next year, fair! You better rock just as hard! 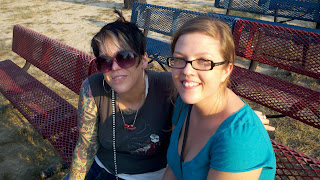