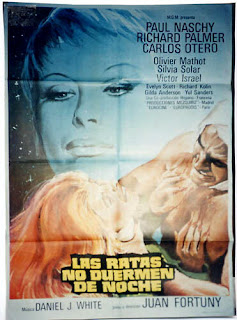 We continue our romp through the Mighty Molina's career with the French genre hodgepodge , CRIMSON aka Las Ratas No Duerman en la Noche (THE RATS DON'T SLEEP AT NIGHT), a far more profound sounding title than CRIMSON, but hey, whaddayagonnado?

At first I think this might be the Naschy answer to RESEVOIR DOGS, as the film opens with a botched jewel heist and the perpetrators, a band of career criminals - Jack Surmett (Naschy), Henry, the old dude and second in command, Paul, the bald suave one, and Karl, the ugly bumbling idiot - fleeing the scene. The police pursue the gang and Surmett gets shot in the head. His cohorts race to get him to their hideout as he bleeds all over the back of the getaway car.

Upon arriving at the hidey hole, they telephone Surmett's sexy blond girlfriend, Ingrid, and have her bring drunk and inept Dr. Reider to help save Surmett's life. Reider is so passed out from the drink, it takes quite a bit of effort to convince him to come help their boss. Reider (you can almost smell the scotch on his breath watching him) doesn't think there's too much he can do for Surmett and suggests the hospital, which of course, is out of the question, being as how they just botched a jewel robbery and and it's implied it wasn't their first. (Side note: the alarm wasn't supposed to go off. They had it planned to the letter. That's just Surmett's way, so it's totally odd that the thing went off in the first place and they're in this predicament.)

Reider does know a reclusive genius scientist in a remote isolated village that might be able to help Surmett. So it's settled. The crew will set off to Professor Thys' country house and coerce him into helping their leader. When they arrive, creepy butler Pierre welcomes them, stating Thys is in his lab where he spends most of his nights. I take this as a good sign. Any scientist, mad or otherwise, should spend countless night time hours in his lab.

We meet the Professor, looking like a young George Romero, and it seems he has suffered some sort of accident in the lab during the course of his experiments and no longer has the use of his hands. His lovely wife Anna, with the cutest blond pixie cut I have ever seen, now helps him in his work at his direction. The couple also has a young daughter, Nathalie, who will come in handy here in a minute.

The professor takes a quick look at Surmett and decides straight away that he'll need a brain transplant to survive the shooting. Henry decides to hunt down a brain in Surmett's worst enemy, The Sadist (that's this character's name!), a nightclub owner and all around sleaze bucket who Ingrid was at one time involved with. This seems like the best idea because the rest of the gang isn't offering up their own brains any time soon.

The professor and Anna have some moral obligations regarding what these thugs are asking them to do and find it against their general constitution to consort with murderers. Henry does the only reasonable thing so they'll comply - he kidnaps Nathalie and demands the couple perform the operation. Geez, Henry sure is loyal. You'd think he'd just want to Surmett to go away so he could become the new leader of the heists. But no, the loyalty here is downright astounding. I hope if I'm ever in the middle of a botched jewel heist and get shot in the head, my friends are as tremendously loyal as these guys.

There's an elaborate nightclub performance smack in the middle of this that I'm finding difficulty describing. Two male dancers and a female gymnast type perform an almost operatic dance routine involving all manner of ballet, Russian folk dance, some calistheics, and a story line that may or may not include jealous lovers. It's a doozy and it's seemingly out of nowhere, but then we learn this is just a segue into meeting The Sadist, as they are auditioning for one of his night clubs.

The Sadist is impressed with the dancing (I really think he just likes the female dancer - she's limber enough) and decides to take in a poker game. However, The Sadist's idea of a poker game is inviting a few friends over, pulling guns and knives on them and taking all their money. Hey, it's all in a day's work for The Sadist. I wish my name was The Sadist. Hi, I'm The Sadist, nice to meet you.

After the card game, The Sadist leaves, but not without Karl and Paul hot on his trail. Apparently, awhile ago, Ingrid, Surmett's girlfriend, was sexually involved with The Sadist. As he leaves the club, Ingrid approaches him and lures him into an alley to rekindle their relationship. Never trust a pretty face, The Sadist! Shouldn't you know that after years of being The Sadist? You would think someone named The Sadist would know all about the wiles of woman. Ingrid really doesn't want anything to do with her ex; it's all a trap to get his brain! Paul shoots The Sadist and they load him into their van.

Now, what about removing the head? No one wants to, because, seriously, they can rip off jewelry stores but they didn't bargain for morgue work! There's some silly banter and back and forth between Karl and Paul until it's decided. They will behead the body via moving train!!!! And this works! They place The Sadist's corpse just so on some train tracks, wait a few minutes, a train comes by, and voila! Head removed and rolled right into their waiting paws.

Back at the professor's, Anna is able to remove the bullet from Surmett's head. The operation is going to be a success and the Thys' will get their daughter back and everyone will be happy. Right? Wrong! Willy, The Sadist's right hand man, has read in the paper about a headless corpse. That, and he can't find The Sadist anywhere. Oh, and Henry and the crew send the brainless head of gift wrapped to The Sadist's wife, Barbara. Willy swears revenge...

Meanwhile, Surmett has woken up and is making out with Ingrid in his hospital bed. You know Naschy - nothing like a little brain transplant to stop him from getting it on. But mid-make out, he starts to want to strangle Ingrid. He tells her of the nightmares he's been and then sends her away. He wants to be alone because he's not feeling quite right.

Ingrid goes to get Dr. Reider while Willy is desperate to make good on The Sadist's death. A girl selling flowers tips Willy off to Paul and Karl following The Sadist and Willy manages to kidnap Ingrid and Reider. Willy then calls Barbara to torture Ingrid into the details of Surmett's whereabouts. They burn her with cigarettes and one of Willy's thugs rapes her. They threaten to turn her body into a 'giant sore' if she doesn't spill the info.

We've now reached pretty much the hour mark and I'm a little disappointed because there hasn't been too much Naschy yet. It's all buildup, gangster stuff, and just a dash of Frankensteinian mad science (implications of the experiment - a breakthrough, but at what cost!?) I'm optimistic though, because Thys thinks Surmett is well on his way to recovery.

Willy beats up Dr. Reider and sends him back to Thys' house. He confesses what has happened to Ingrid and then dies. There's no time to feel sorry or cry for the mob doc because Surmett is up walking around with a sexy white bandage wrapped around his head and wearing a very tight blue shirt. He's so far so good, but feels 'different.' Thys and Anna have some sort of treatment they want to administer to him, but Willy and Barbara show up and hang Paul from a tree and Barbara sexes up Surmett (he is part The Sadist, after all). He has the same perverse desires, he tells her, so she allows him to strangle her and then they do it.

We also come to find out during this melee that Karl is the one that fucked up the robbery in the first place, tripping another alarm while he tried to make off with some (fake) pearls for himself. Henry's pissed, Paul is dead, the rival gang is on the loose, Surmett's become perverted, and everything is basically falling to shit for everyone.

But that doesn't mean Surmett doesn't have time for a little more sex with cute paper girl, Emmy, and by sex, I most definitely mean rape. After his tryst with Barb, Surmett takes off after Emmy into the woods, but Karl and Henry break it up and almost talk him out of his craziness.

Surmett decides he can't live like The Sadist. But honestly, how is he really any different? We don't rightly know, since we don't really know Surmett, but if The Sadist and him were in cahoots enough that they were sworn enemies, they had to have run in the same circles, and therefore been equally maniacal? I don't know. It's Paul Naschy, so of course he's going to be more likable and humane than some sleazoid with a mustache called The Sadist.

Long story short, Surmett goes back to the chateau, tries to fondle and kill Anna, she stabs him with a syringe filled with 'treatment' and then puts his head through a glass door. Non-plussed, Surmett finds a gun, has a shoot out with police, takes a few bullets, and dramatically falls to his death. The ordeal is over for everyone, most everyone that should be dead is, and the Thyses can go on with their lives.

If you're a Naschy completist, go for it with this one. You could do worse, like MYSTERY ON MONSTER ISLAND, with his blink and you'd miss it cameo. The death scene at the end is memorable enough and Paul looks kinda cute all wrapped up in bandages.

Let the blog-a-thon continue!
Posted by Jenn at 9:18 PM