The Wrestling Women vs. The Aztec Mummy 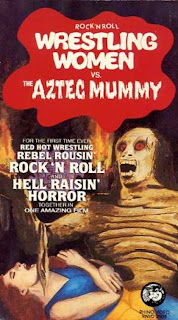 Do you like lovely ladies battling it out in a boxing ring wearing skintight unitards? Do you like capers involving a Japanese martial arts gangs hellbent on finding a secret codex to unleash the power of the ancient Aztecs? How about mummies? Ya like mummies? Well, you're in the right place, folks, and Rene Cardona is bringing you all of the above in his 1964 flick, The Wrestling Women vs. The Aztec Mummy. I'll warn you though, we don't get to the mummy for a minute. But there's aplenty to keep us entertained until then.

The adventure begins as famed archaeologist Dr. Zorba is deposited on the street from a moving vehicle. He then decides to take in an all-female lucha libre match, which actually feels like it was filmed at a real match with a real audience. We meet our two heroines in the ring - Loretta Venus, a raven haired beauty and her tag team partner, the Golden Ruby, a deliciously tall Amazonian brunette. Both women are sexy and feminine, but could still likely kick the shit out of anyone, as they show their dumpy opponents in this opening match.

After the match, Loretta and Ruby retire to the locker room where Zorba is lurking. Seems he needs to speak to Loretta's fiance, Mike and has tracked him down through Loretta. And I thought he was just there to ask for their autographs! Zorba's been working with Mike's uncle, Dr. Tracy, amongst others, on finding an ancient Aztec codex. All but Zorba and Tracy have been kidnapped, tortured and murdered by the notorious Black Dragon gang in hopes that they'll relinquish the secret of the Aztec treasure to the thugs. But Zorba doesn't know the secret quite yet, but before he can tell Mike and the girls anything else, he's killed then and there with a poison dart!

The leader of the Black Dragons, Prince Fuji, needs the codex so he can give superhuman attributes to his two warrior sisters. How he knows how to do all this is beyond us, but no matter. It sounds cool. But the Black Dragons are going to need Dr. Tracy to help them because he's the only surviving scientist that might know the secret.

Back at Tracy's apartment, Charlotte, the pretty blond daughter of one of those poor dead archaeologists, has taken refuge. Charlotte, the women wrestlers, Mike, Mike's friend, Tommy, and Dr. Tracy all sit around for a bit stating the obvious. 'The situation is very dangerous' and 'they'll try to get the other part of the codex.' Oh yeah, Tracy's decided to split the codex into three pieces and give each girl a piece so 'it will be harder for the Black Dragon to locate.' Never mind the fact that he invites the girls to stay at his apartment with him so they'll be safer. Okay, doc, whatever you say.

But the doc's not that much of an idiot and shuffles all over town leaving pieces of the codex in various locations and thusly sends the girls clues so they can find them. While this seems to be an exercise in futility, not to mention exhausting on the part of everyone, the Black Dragon breaks into Tracy's apartment, kidnaps Charlotte and 'breaks her will' with science. And by science, he injects her with a serum that will keep her under his control, 'dominating her mind.' And they also bug the apartment with a video camera (were there video cameras in '64? - who cares - the Black Dragon is a mad scientist and he would have had access to this technology long before it was actually invented) so they can spy on Tracy and the gang.

Then a sombrero arrives at the apartment and it's a clue to obtain part of the codex. How many times a day do you hear that sentence? The gang figures out that the second part of the codex is at the Hotel Rio in room 13. But when they arrive, the Black Dragon is waiting for them. Loretta and Ruby get to show off their wrestling skills and kick some ninja ass, while Tommy shrieks about his back and Mike gets in a punch or two here and there.

There's some more fighting, some of the Black Dragons are captured and take cyanide pills, Tommy gets injected with truth serum, and the Prince manages to get most of the codex. He then decides he wants his sisters to fight Loretta and Ruby for the remaining piece of the codex. Winner gets the whole she-bang, and Charlotte will be released from hypnotic imprisonment.

Here's where you perverts can really get into this. It's about fifteen minutes of girl fighting and it's pretty realistic. While the warrior sisters don't get too kung fu on the sixties version of GLOW, it's still entertaining and kind of nerve wracking, as you really can't predict the outcome. Loretta and Ruby end up prevailing and the Prince turns the codex over to them. Too easy. Way too easy.

Well, duh, the Black Dragons still have the Tracy gang under surveillance, so as Tracy translates the scriptures, the Prince is all ears. We find out about an ancient Aztec story about a lovely virgin who left with her lover on the night she was to be sacrificed to her gods, the highest honor for a virgin back then, apparently. The two were eventually captured and the girl was put to death and her lover was buried alive to watch over the tomb so his soul could never rest. The Prince, upon hearing all this, thinks it's all fairy tales, but apparently there's a good deal of treasure sealed in the tomb and the gang goes off in search of it, natch.

So we're off to the Aztec ruins and some mummy action, finally, after nearly an hour of capering, wrestling, science, and folklore. Tracy instantly finds his way into the giant pyramid and through some bumbling, release the mummy, which actually looks pretty scary. He's no Ho Tep, but he's gaunt and he shuffles and moans a lot. AND he can can turn into a bat and he hates the sunlight. Some kind of vampire/mummy hybrid, perhaps? The gang takes a gold necklace from the corpse of the mummy's girlfriend and flee back to home base. But the mummy's transformation powers aren't all for naught, because he tracks them in bat form back to the apartment, dispatches with the whole Black Dragon crew who he meets outside, and attacks Charlotte, all before the sun comes up!

The next day, Charlotte thinks they should return the necklace to the mummy so he'll leave them alone. Oh, rly?, Charlotte? What a capital idea! Charlotte and Tommy make their way back to the tomb, but get separated inside and that asshole Tommy leaves Charlotte down there, goes back to the apartment and gets the others to go help him find her. Because we all just live down the street from some ancient Aztec pyramids. Did they have time to stop at Burger King on the way there?

They find Charlotte in the nick of time, as the mummy has her bound and is about to (literally) stab her. I guess he loves her or something. Even though she doesn't resemble his girlfriend at all. You can just tell. If a mummy ties you to a sacrificial altar and tries to stab you with a sacrificial knife, it's love. But the gang arrives just in time and frees Charlotte, captures the mummy, chains him to a column, and runs for their measly little lives. The mummy freaks, pulls down the column, and thusly wrecks the entire ancient tomb, the end.

I kind of feel sorry for the mummy in the end, but I usually always do. It's a curse and it's usually a sad one involving unrequited love, or in this case, punishment for falling in love. I really hate Tommy, as he is annoying and self serving and would have been a good mummy victim. But only the 'bad' guys, the Black Dragons, get to really feel the mummy's wrath, and only then it's out of self defense, really. And what did the mummy ever do to any of these guys? They took his damn necklace and he wanted it back. I don't find that all that unreasonable. It's also a bit disappointing that the mummy bits are only the last ten minutes or so of the movie. Oh well. This has enough female wrestling, age-old legends, inexplicable situations, and inane dialogue ('Look! He's afraid of fire! Look, he's a vampire now! Look, he's a mummy again! Look, it's a spider!) to keep it going, although rather bumpily. I could almost see Roger Corman behind something like this and if you look at Cardona Sr.'s oeuvre, he's not far off the mark.

There are worse ways to spend ninety minutes. Now, if only this had had Paul Naschy in it and it was filmed in the wilds of Spain, and the wrestlers were vampire witches, and Paul had sex with all of them, and the mummy could also turn into a werewolf, and there was a Japanese diamond heist....
Posted by Jenn at 10:15 PM

Labels: 60's, movies which could have been improved with the appearance of Paul Naschy, mummies