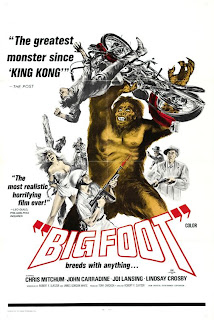 This post is a reprisal, as it was presented at J. Astro's Screen Grab during SquatchFest.


BIGFOOT (1970). Sounds about as generic and unmenacing as possible, but throw in the fact that it has John Carradine as a scheming traveling salesman, was produced by Anthony Cardoza (of Beast of the Yucca Flats fame), and has a scene where a ‘squatch fights a bear and then subsequently decides to mate with a human woman! This movie alone is a SQUATCHFEST!

A beautiful blond arrives via her convertible at the airport. She mans her private plane and begins to fly out over the hills of Red Bluff, with nary an explanation. She encounters some engine trouble and her plane goes down somewhere in the mountains. She parachutes to relative safety but is almost immediately taken into the custody of a large and hairy creature intent on perhaps mating with her. At any rate, he’ll tie her up and see what Daddy has to say about it.

As our blond makes her descent and capture, two yokels, Jasper (Carradine) and Elmer are driving through the same mountains peddling their meager wares at general stores. They find their way to Bennett’s General Store deep in the mountains and run into some motorcyclists and their girlfriends stocking up for a weekend of debauchery. The bikers ride off and couple of them, Rick and Kris, take a break from the others for sexy times and bike mechanics. Kris wants to get it on, but Rick wants to work on his bike. Kris gets a little angry and wanders off bikini clad into the woods. She finds a Bigfoot graveyard and as soon as she can call Rick over to help her investigate, the creature in question has attacked! The thing makes off with a passed-out Kris and Rick returns to Bennett’s to phone the sheriff and get some help!

What follows is some crazy mad capering around the mountainside in search of Kris. Jasper and Elmer are enlisted to help the distraught lover in his quest to find his girlfriend, but Jasper seems to be in it more for the financial aspect, rather than helping any unfortunate lovely co-ed. Seriously, the Bigfeet capture the search party at one point, and tied to a tree, Jasper is still conniving on how to get a Bigfoot alive and into the carnival circuit. I gotta appreciate his tenacity, but damn.

Turns out, all in all, there’s about five Bigfeet and their Daddy, a nine foot tall behemoth who wants to have relations with a human woman. Our lovely pilot from the beginning has been tied up with this brutish clan for a moment and has come to have some astute observations about them, which she relates to Kris and her search party once everyone is captured. Seems several of the younger Bigfeet might have human mothers because they have different faces. Or something. The whole Bigfoot having sex with human women theme is here, but I wish it were explored further. Nothing says Bigfoot movie like a Bigfoot doing it with a human lady. That, and there seems to be a complete lack of female Bigfeet. They all seem to be dudes.

Then, completely out of nowhere, the Daddy Bigfoot fights a bear! And wins! I think this was for reals, too, in that a guy in a Bigfoot costume actually wrestles a live bear. And I thought a werewolf vs. a yeti was good. This was, gulp, way better. During the bear/Bigfoot showdown, the pilot blond gets loose and makes her hurried escape through the woods. The bikers arrive at the Bigfoot camp and set everyone free. Jasper manages to catch the littlest Bigfoot but also manages to loose him several minutes later. Everyone decides to leave. Roars are roared, shots are fired, dynamite is proffered, everything is blown to smithereens, except for our human characters and Jasper, always the business man, solicits the blond pilot to tell her story at carnivals, thus making them millions. FIN.

Good times. Great times, really. Bigfoot/bear showdowns, sexy times with creatures (even implied, I’ll take it!), liberal use of the words ‘varmint’ and ‘rascal,’ an over the top greedy John Carradine, Bigfoot’s use of weapons (hatchets), baby Bigfeet and Daddy Bigfeet, the fact that I get to say ‘Bigfeet’ over and over, and correlations to KING KONG. If I was feeling more scholarly, I might just have to argue this is a low budget dumbed down KONG, but I’m not particularly academic lately.

There you have it. Track it down. I believe it’s terribly difficult to find, I myself procuring it at a convention as a bootleg DVD in Baltimore many years ago. It should be an integral part of the Bigfoot canon.