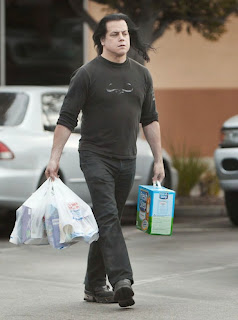 Dear Glenn, thank you for letting us come to your show tonight. It was nice to see you when I wasn't staggering through a blackout, as is so often the case when I've come to see you in the past. A good time was had by my company and myself and I happened noticed several things in my lucid state.

People still really like 'MOTHER.' I think everyone paid thirty bucks just to see you guys do that one. They also really like the stuff off Danzig I. But why wouldn't they? It's your best stuff as Danzig and you guys should totally do one of those tours where you play Danzig I in its entirely.

I also noticed that as you sweat, your hair is really thinning. It's almost to Crypt Keeper levels. But I commend you for still rocking the long hair. I'm quite disappointed though, that you didn't wear the black fishnet shirt. You opted for a more conservative black muscle tee. I suppose the mesh isn't as flattering these days. So be that.

Your fans these days have the collective IQ of negative five. The crowd was almost at a Slayer-fan-level IQ. Almost. We did meet a charming gentleman outside who just recently, as in before the show, discovered you used to sing for The Misfits. We acted way too cool and didn't dignify that one with a response. I also made friends with a seventeen year old in a tuxedo that had left his date at the prom to come see you. That is dedication. How his date felt about it, I've no idea.

I still really like CIRCLE OF SNAKES. I liked it back in 2005 and I like it still. That chorus on 'BLACK ANGEL/WHITE ANGEL' is pretty fucking awesome. I don't even consider it a guilty pleasure, but a real one. I do not, however, really want to see any of the songs off DETH RED SABAOTH performed live again. They are okay on the record and I was about to say this was a return to form of sorts for you, but then I heard these live (and sober). I'll still listen to the record. But reconsider that Danzig I tour, would ya?

It was also interesting to hear of your food choices, as my friend works for the catering services at the venue, and I am very interested in these sorts of things. I heard you had chicken and broccoli and the only stipulation on your food rider was no seafood. I guess you are from Lodi and there isn't really good seafood in Jersey. Makes sense. It was also fun to hear that you were the first one to the catering line, as my friend said the headliners don't usually come down to eat until after the openers. You were first in line. You need a full tummy to perform well. I understand that.

I AM DEMON is a great song for an encore. Thanks for not being predictable and making MOTHER the encore. SHE RIDES would have been another excellent choice.

Again, thanks for letting us come. I know you're like in your mid-fifties now and shit, but this Danzig line-up is pretty solid, way more solid than the current incarnation of the Misfits. I know both bands have been more brand that band for over a decade or so now, but at least you still seem somewhat serious and still committed. The last time I saw the Misfits, everything was sped up to unrecognizable levels and Jerry's ego overtook the room. But I'm sure you grow weary of hearing about Jerry's exploits of late, even though you and Doyle are still on good terms. Think about maybe doing SKULLS again next time, since you performed it in 2005 on the CIRCLE OF SNAKES tour. Which was awesome.

P.S. I know you probably don't remember, but I met you on that '05 tour and you were just as everyone describes. Interpret that as you may.
Posted by Jenn at 5:20 PM