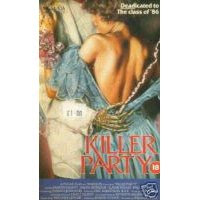 Oh, Killer Party, it's over between us. I'm sorry. I didn't want it to end this way. I wanted so badly to like you and to move forward with you, touting you on the internets, getting matching tattoos with you, basically, starting a life together. Oh, Killer Party, you coulda been so cool. Look at your cover art, the reason I blind bought you in the first place. I was so attracted to you. I still am. You've got that 80's thing down, complete with the hottest mulletted rock band to ever play inside a drive in's concession stand. You've got a crazy funeral, zombies, Paul Bartel as a stuffy Literature professor, demonic possession, a costumed masquerade, sorority babes in a hot tub. You seemingly have it all. Then why, why oh why, do you fail me repeatedly? I think you do it on purpose.

I think it's because you try to be too many things - you wind up disjointed without focus. You begin on a false note, then another one, then another one, never fully committing to any one beginning. I'm was like, when are you actually going to begin? And what are you? Half the time I don't even know! Are you a slasher? Are you a comedy? Are you a demonic possession movie? Are you a haunted house movie? What the heck are you? You are effectively voyeuristic in places and you do have sorority girls paddling each other with intimations of lesbianism and ominous sounding music, but that's not enough. I need more, I'm older now. I've got to move on. I've got to think of myself.

Oh, I know, it wasn't always bad. Remember that time when you depicted April Fool's Day as kinda the next Halloween? That's what I love about you, Killer Party, the way you can take a lame pseudo-holiday like April Fool's and make it awesome. I think April Fool's should be the next Halloween, like a half-way to Halloween celebration or something. Remember that time you had sorority pledge Vivia pretend to decapitate herself with a rigged guillotine fooling everyone and then geeky Martin made out with the fake severed head? Good times! Remember when Jennifer turns into the demon and swings from the chandelier? Why can't it always be like that? I guess we'll always have guillotines, demons swinging from chandeliers, and geeks making out with plastic heads. I'll always remember the good times. Always. But I need more.

I know, I don't want this either, but your gratuitous use of a guy in a scuba suit ala Scooby Doo really was the final straw. This also coulda been so cool, but your lack of enthusiasm proves even a guy in an antique scuba suit can't save our relationship. I know it doesn't pay to be popular and you probably shouldn't pledge a sorority anyway and your message there is quite clear. But I just can't take it any more. I know this is gonna hurt when I say this, but I can't help it - I would rather just go back to Hell Night or Black Christmas, I know they hurt me in the past too, especially when Black Christmas got itself remade, but seriously, they are much better sorority movies than you'll ever be, Killer Party. I'm sorry. In time, you'll see this was the right decision. I never meant to hurt you. But know, please know, that it was you, not me.
Posted by Jenn at 8:38 AM