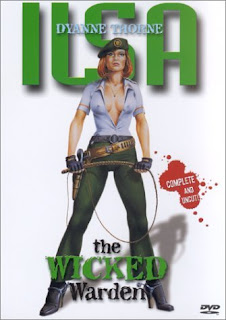 Now, this, this right here, this movie is why I love Jess Franco. This very movie right here. Ilsa, the Wicked Warden. Not only does it feature the sexy ass Lina Romay (aka Mrs. Jess Franco) as a naughty, dirty, conniving, lesbian inmate, but it has the fantastic Dyanne Thorne channeling the Ilsa character from She Wolf of the SS, doing what she does best, torturing through electrocution and forced sex. This is truly Franco at some of his raunchiest, and therefore ultimate best.

The opening sequence is a shower scene. Can't go wrong here. Soapy naked ladies abound while the female guards look on. One of the girls starts screaming to create a diversion and a brunette runs off wearing only a white button down shirt and her tan lines. Once the female guards realized what has happened, they give chase through the jungle wearing unflattering khaki shorts and toting rifles. They have strict instructions from a male voice over to not let 'the dirty little pigeon' escape. The girl, Rosa Phillips, is eventually grazed by two bullets and stumbles into the medical clinic of Dr. Arcos (Franco). Rosa rambles and raves about shock treatments and the horrible crimes committed at the Los Palo Mas clinic she just escaped from. Arcos tends to her wounds and then tells us in a voice over that she died two weeks later.

We also find out via voice over that Los Palo Mas is a clinic that treats ladies for sexual disorders such as nymphomania and prostitution. Arcos has performed some investigative research since his encounter with Rosa and found Los Palo Mas to be more concentration camp than rehabilitation clinic. He pleads his case to the Rosenthal Foundation, I suppose this is some sort of government regulation agency, for help in exposing the clinic for what it really is. The head honchos at Rosenthal tell him no way, Jose, the clinic meets all government regulations and they have no reason to shut it down. The only way they could investigate is if a former patient came forward with eye witness testimony.

Disappointed, Arcos leaves and gets in his car. A lovely brunette jumps up from the back seat and holds Arcos at gunpoint. She wants to be admitted to Los Palo Mas to find out what happened to her sister, who happens to be Rosa, the woman Arcos helped who has since been believed to have died. The brunette, Abby, wants to go undercover to find out what happened to her sister and assist Arcos in shutting down the clinic by providing him with that much needed eyewitness testimony. Okay, cool, but why the gun? No matter, Arcos agrees and they begin to develop their plan to infiltrate the clinic. They invent an identity and affliction and admit her to the clinic post haste.

Upon arriving, the female guards strip Abby and hose her down with a garden hose. They laugh and degrade her, mainly referring to her pubic lice. They give her a white shirt and, at her request for panties, tell her everyone goes bare-assed around this place. They smack her on the ass and give her her new name, 41. Under no circumstances will she refer to herself as Abby or tell anyone her real name. If she does, she gets a big 41 branded on her boobie.

Let's meet the rest of the patients. It's your typical mental ward. Humming, rocking back and forth, sobbing, smoking, staring, cursing for no reason. All the behaviors are represented. The lovely Lina Romay, here with a short pixie 'do which looks absolutely stunning on her, is the leader of the patients, Juana, aka 10. Juana instructs the other patients to fondle Abby and insists on knowing her real name. Abby sticks to her guns, she doesn't want that branded tattoo afterall, and tells Juana her name is 41 and then Juana tells her she'll maul her whenever she sees fit. Yes, please.

Turns out Juana is the Warden's (Dyanne Thorne) girlfriend. Juana visits Greta the Warden in her chamber for super sexy results. Well, sexy on the part of Juana. Greta is almost a caricature of a woman - with her red blond wig, long red fingernails, gigantic boobies, slender waist, and pancake makeup. Dyanne Thorne always looks like a drag queen, though, and here is no exception. I imagine her still looking like this today, like a sexy grandma that's had one too many facelifts and Pall Malls. Greta instructs Juana to remove her clothing, then demands a massage. Juana complies, herself getting nakey, however, she doesn't remove her knee high gray suede boots. She massages Greta until Greta tires of this and then lays down and allows Greta to push pins into her tits and stomach. Once the pins are place, Greta jumps on top of Juana, driving the pins further into her flesh. It's all good, though, Juana's sexual proclivity involves masochism, so the relationship is a healthy one.

Back in the dormitory, all the girls are naked and touching themselves. A post-operative transsexual introduces herself to Abby and tells her all about her operation, the murder of her husband, and how she now likes women because of their sensitivity and passion. It seems like the start of a beautiful relationship.

Then Greta interviews Abby about the nature of her disease. Seems Arcos has invented an elaborate tale about Abby's former life as an elementary school teacher who liked to have sex with her young male charges. Abby plays it to the hilt, and sort of actually convinces the audience she is really deserving of being at Los Palo Mas. She describes the incidents in such lurid detail, Greta gets turned on, and maybe Abby gets a little turned on as well.

Cut to another shower scene. Juana wants Abby to wash her. Lina Romay tells you to wash her, you better well fucking do it! She tells her to really scrub her culo, to do a good job. Abby concedes for a few moments, then tells her no. Juana shoves soap in Abby's mouth and a naked girl shower fight breaks out! I know, you always wanted to see Lina Romay in a naked all girl shower fight. Here's your chance.

For not washing Juana's culo, Abby winds up in Greta's torture chair and has the bejesus shocked out of her vagina. The shock treatment is supposed to take away her desire for sex with young boys, but really, it's more for Greta's, and her male guard's pleasure. Seems the male guard has a side business where he tapes all the nasty disgusting things Greta does to the girls and sells them on the black market to wanting and paying perverts. More on that in a second.

Juana goes to talk to Greta to get her cigs and give all the gossip on what the patients have been up to. Juana thinks Greta's been too hard on Abby. Juana reveals that Abby is looking for Rosa Phillips and Greta drops the bomb that Rosa is still alive and in solitary somewhere on the premises. After this convo, Greta goes and bull-whips a few inmates in solitary with sadistic glee and pays a visit to Rosa, strapped to a box spring and hooked up to a shock therapy device. She demands info on Abby's identity and the terrorist group she's affiliated with (I know - the whole terrorist thing came straight outta nowhere). In her stupor, Rosa ponies up Arcos' name for some reason (unless I missed it) which propels Greta to send hired thugs to kill Arcos. Uh oh, looks like Arcos can't spring Abby from the clinic now. Whatever will she do!?

Too bad the following didn't get caught on the guard's camera. Juana sits on the toilet. Abby is brought in to find out information on Rosa's whereabouts. Juana, being the compassionate soul she is, instructs Abby to lick her boots, then wipe her ass and clean it out with her tongue. Abby does a good job this time cleaning Juana's culo, and Juana agrees to take her to Rosa.

There's only one way for this to go and if you guessed cannibalistic mutiny, then you are correct. It's really the only way a movie like this could end, with the inmates ripping Greta to shreds in a primal frenzy intercut with scenes of jungle cats tearing into prey. It all gets captured on camera in the most literal scene of male gazing I have ever witnessed. It's actually got his fat face smiling right next to the camera as the women rip his boss to shreds with their teeth. Wow. All I can say is Wow.