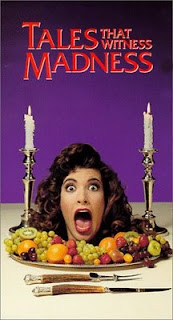 Tales that Witness Madness (1973), I believe, is the first anthology the Cavalcade has tackled in its brief, albeit wild and varied, history. Yay! Anthologies are alright. I have no particular aversion to them and I fucking love Creepshow, but of course. There's always going to be one story in an anthology that's better than the rest. And if you really hate one of the stories, you know it's not gonna last for long. So, goody for anthologies.

For those of you unfamiliar with this underrated piece of British film history, it stars the venerable Donald Pleasance as Dr. Tremayne, a doctor who has assembled four complete nutcases in his stark, white-walled asylum for his experiments. What these experiments are or what Tremayne is actually doing (aside from the fact that he's doing 'science') is never fully explained, but each case is vital to his research. There's your frame story, a loose one, yes, but Pleasance never fails to disappoint and it's always nice to see him in a lab-or-a-tory measuring various colored liquids into different sized beakers. I could watch that all day, honestly. Don't tempt me.

The latest visitor to Tremayne's institute (Jack Hawkins) wants to find out more about the patients and is pleased to see 'all four cases resolved.' This was troubling, in that all the patients we'll meet here in a second, all still seem to be crazy as hell. But whatever. Let's meet these lunatics, shall we?

First we have Paul, a spoiled, home-schooled youth of about seven, who has a vapid, shop-a-holic loon of a mother and a work-a-holic, red-bearded brute of a father. Mummy and Daddy fight about absolutely everything, including Paul, and Paul seeks solace with his tutor, his little toy piano, and his 'imaginary friend,' a giant invisible tiger named, aptly, Mr. Tiger. Naturally, upon finding out the existence of Mr. Tiger, Mummy grows concerned, especially when Paul starts sneaking giant soup bones up to his room to keep Mr. Tiger sated. A fight between the parents involving Mr. Tiger ensues and it doesn't take too long before Mummy and Daddy are gorily turned into tiger food. It's a great scene, honestly, and the bloodiest in the movie. It's only improved by Paul plinging on his little piano as his parents are ripped to shreds behind him. At one point, a great splatter of the red stuff is slung on the wall right above Paul's head! Back at Tremayne's institute, Mr. Tiger still seems to be present, as Paul asks, 'Is it feeding time already? Do you have any bones?' Say this in a little kid voice with a strong British accent. Maybe Tremayne wasn't trying to vanquish the imaginary feline to begin with? Who knows? It's science! My feeble brain can't possibly try to comprehend!

Next up, we're introduced to Timmy, a former antique shop proprietor who became obsessed with a Penny Farthing (one of those old timey bikes with the big wheel in the front and you have to pronounce it like this - say penny real fast, then stretch out fah-thing for several moments) that was able to transport him to an alternate Victorian reality where a statue (?) or zombie (?) that sort of resembles Sherlock Holmes stalks him and his beloved. As the two worlds begin to collide for Timmy, his antique shop gets burned to the ground and his present time world girlfriend gets killed with a flying dagger. There's also a haunted painting. Back at Tremayne's, Timmy still wears period garb, sports a nasty burn scar on his face, and repeats how he killed Uncle Albert (the dude in the haunted painting), um, repeatedly. I forget Tremayne's comments about Timmy, but you know, all in the name of science I guess.

'Does anybody here love me?' asks Brian, as he practices the age-old art of flower arranging from his cell at the asylum. The flashback then takes us back to a day in which Brian went out for a jog and returned with a rotting tree carcass that resembles a feminine form (there's a sort of face and definite breasts). Bella, Brian's girlfriend played by a delicious Joan Collins, is not pleased about Brian's recent acquisition and is almost jealous (?). She's jealous of wood. Irony? She wants Brian to get rid of the thing which Brian agrees to after a jaunt at the pub, but this gives the tree plenty of time to become increasingly jealous of Bella, at one point even growing claws, all the better to gouge Bella with, and passive aggressively soiling the carpet with leaves and dirt. Upon returning from the pub, Bella and Brian have a row about the tree, and Bella wastes a drink by throwing it in the tree's 'face.' She, Bella, not the tree, puts on a negligee and has a fever dream about the tree ripping off her top. Yes, you actually get to see Joan Collins' breasts. And yes, a tree exposes them. Hmm, maybe a certain movie involving Sam Raimi might owe a little something or other to this scene? Anytree, Bella gets a machete and the next thing you know, the tree's in bed with Brian and Bella's nowhere to be found. In the solace of  his room at the asylum, Brian plays with flowers all day and asks if anyone loves him, to which no one ever replies.
After a brief sojourn with Pleasance and Hawkins that involves some convolution about discreditation of the actual science (who could discredit all this?! Fiends!), we meet Oriel, a once fairly high falutin' PR rep for Hawaiian author, sex symbol, and tribal voodoo practitioner, Kemo. In her former life, Oriel was to give Kemo an elaborate luau to celebrate his book coming out, I think that's why any way, she also finds him incredibly appealing and wants into his grass skirt, so maybe that's why she's throwing him the party.  She wants everything to be perfect and Kemo, having heard about the surprise shin-dig, takes this opportunity to sacrifice a virgin, Oriel's very sexy jailbait daughter, Virginia, and unsuspectingly feed the meat from this sacrifice to Oriel's guests at luau to appease his gods or maybe his mother; there's a scene in the beginning where Kemo's telling Mama Kemo that he'll do whatever it takes to help their people or some shit. Upon realizing she's just eaten her daughter, Oriel freaks and somehow winds up at the institute with Tremayne wringing her hands as she sits by the phone, waiting for Virginia to call. Well, Ginny ain't gonna call, Oriel, because you ate her and served her to the rest of your party guests. This is the slowest, most predictable build up of all the vignettes in the film, yet still quite satisfying, at least for this viewer. I think it's mainly just the great 70's ensembles and fabulous pool house decor that pique my interest the most here. Although I must say most of the stories here are rather predictable and, being British, somewhat restrained and a bit clipped feeling.
After all four tales are told, Tremayne gathers the nutters in a room together, Hawkins remarks how preposterous the whole affair is, and the whole thing kind of resolves itself while we all feel sort of unfulfilled. Not one to play the game of what could have been, but in the right hands (Freddie Francis directed this in possibly the most boring fashion of his career - although there are some nice set pieces and the haunted bicycle scenes in the Victorian reality are beautifully shot), this could have a been a total scream. There are some hints at dark humor here, particularly Pleasance's performance, he's always short of shrewd, isn't he, to the fact that he may or may not be up to no good. It's in definite need of a bit more EVIL. With the exception of the tiger eating Paul's parents, there is little grue, with most of the violence being implied. Not entirely altogether a bad thing, I'm not a super gorehound as is, yet, as I mentioned, there is a bit too much restraint proffered, when I tend to like my movies out and out ridiculous. However, the cover art is simply magnificent and you could likely do worse with your anthologies - Body Bags, anyone?
Posted by Jenn at 11:56 AM