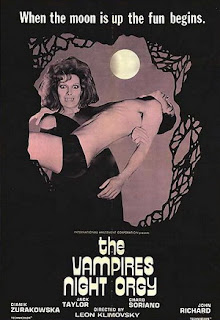 It's been a slow posting week here at the Cavalcade, mainly because I've been raging with the partying. And by partying, I mean drinking alone while watching Roadhouse. Well, that was Friday night, me, a big bottle of pino grigio, and Swazye. I could simply not think of a better way to spend any night, which is the way I have passed the last two Fridays. Saturday night, more of the same, but instead of Roadhouse, I watched Wayne's World. Sunday, I was so hungover I couldn't move all day, and Monday night I went to see Passion Pit, so Tuesday I was so hungover, I couldn't move again. Wednesday night brought me full circle to The Vampires Night Orgy, or the much better Spanish title, La Orgia Nocturna de los Vampiros. Doesn't that sound hot? Allow me to tell you how hot this movie really was then.

A busload of losers are on their way to some rich bitch's country house to serve as gardeners, maids, majordomos, and other indentured slaves. These are a poor down-on-their-luck but seemingly hard-working folk, and after expressing some uncertainty about whether their 'tin can' of a bus can make it the rest of the way to the country house, the bus driver expires. In a less than harrowing oh-our-bus-driver-is-dead-somebody-step-on-the-brakes-and-take-the-wheel maneuver, the crew finds themselves in dire straits. What should they do? Oh, wait, there's a village, Tonia, that doesn't appear on any map that someone mentions they can take refuge in for the night, while they figure out what to do with the dead driver.

Ernest takes over as bus driver and drives the gang to Tonia, which they find deserted. They meet up with an American, Luis, who has also just arrived in the village an hour prior. He, too, can't find a soul around, and suggests they all have some cognac and rest up at the inn. Upon retiring to his room, Luis notices a large hole in the wall and applies his eyeball to said hole. On the other side is the beautiful blond Alma (from the bus group) undressing and brushing her hair. He peeps at her for awhile, grinning maniacally.

The next morning, the locals have all returned to their positions at the inn. The bus travelers and Luis are introduced to Mayor, not really the official Mayor, his name is actually Boris, but the title has been in his family for years. Hospitable and bearded, Mayor offers the explanation of a recent death in the village for the townspeople's absence last night. As repayment, he offers to pay for their food and stay.

Here poses a problem. What to feed all these people? Tonia isn't used to so many visitors stopping by at once, so Mayor suggests letting the Countess deal with the problem. I hear Countess and I'm like hells yeah, now we're getting to the orgy party. But first a truck sized man goes to procure 'meat' from, you probably know where this is going, a human they keep chained up for this purpose. The meat is prepared and everyone goes apeshit over it, it's so good and has such a distinct flavor. Then everybody partakes in my favorite pastime, getting wasted. Ernest returns, looking like death warmed over, and tells the party the dead driver's body is missing but that he took care of it. Cryptic, non?

Anyway, still looking like shit, Ernest powers up the bus but the damn thing won't turn over. Mayor suggests they wait a few days to see if they can get a new motor from the village next door and says the Countess will cover all expenses. Wanting to meet this elusive woman who foots all their bills, the travelers go up to her house.

Luis continues peeping on Alma, going as far as sending her a note, telling her someone is always watching her, but in a good way. This pleases Alma, forever the dumb blond that needs saving by the strapping American, and she continues to parade around her room, this time in a blue nightgown, but with her nipples blazing.

Meanwhile, Ernest, now spouting two fangs, lures two more travelers out to the bus for the purpose of feeding them to the villagers. Here's where I made my predictions for how the rest of the show was gonna pan out:

Not on the prediction list, however, are the following which actually happen:

-Two children, one of them who may or may not be a zombie child who is also in the habit of randomly disappearing, play a way too long game of hide and go seek
-Several limb amputations (cool enough)
-A doll burial
-More scenes involving the two children playing hide and go seek

I can only think if this title had fallen into Paul Naschy's capable hands what it might have been. Although director Leon Klimofsky had directed The Werewolf's Shadow and Vengeance of the Zombies, amongst other efforts in collaboration with Naschy, it was curious to why it couldn't have achieved that same greatness. Oh, what could have been! If his Naschyness has been involved, you know there would have been several Countesses, all of which he would have gotten it on with, plenty of werewolf-chained-to-a-dungeon-wall-and-escaping action, and possibly a magic sword, a pact with the devil, and some Knights of Templar thrown in for good measure. Doesn't that sound more exciting? I guess you win some, you loose some, and I was tired and the movie wasn't very long, so it served its purpose. I could have done with just one promised orgy, though.
Posted by Jenn at 10:47 AM

Labels: 70's, movies which could have been improved with the appearance of Paul Naschy, vamps, Zombies