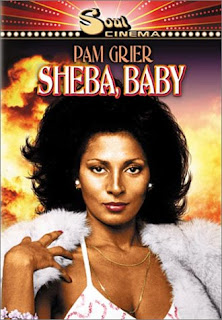 Have you recently said to yourself I need to watch a veritable who's who cast in a blaxploitation movie directed by a man who could have gone on to do great things but instead died violently in a helicopter crash at the age of 30? Well, I can assist you in this area. Allow me to recommend Sheba, Baby to you then.
Sheba Shayne (the always gorgeous Pam Grier), a successful private eye living in Chicago, receives a telegram that her daddy has become the victim of a hostile business takeover. Daddy runs a loan office and some mob types want him outta their territory. It's pretty simple really - Daddy gets himself roughed up and then murdered; Sheba enacts her revenge. Looking mighty sexy, I may add!
Here are the following reasons, in no particular order, to watch this movie:
1. William Girdler directed it. Girdler is the man responsible for such classics as Three on a Meathook and Cavalcade animal-invading-the-human-sphere faves Grizzly and Day of the Animals. Girdler was a triple threat - he wrote most of his own scripts and often produced and scored his films as well. He was obviously a great talent, but died abruptly, I believe location scouting, at the age of 30. He left us nine films, three of them blaxploitation. His untimely death only increases his cult status.
2. It is called Sheba, Baby. I always enjoy punctuation in movie titles and I also enjoy putting the word 'baby' after most things that I say. It makes you sound kinda rock'n'roll. As I was in the middle of this movie last night, my friend came over and he's like, whatcha watching, Jenn?And I said, Sheba, Baby, but all kinda cool sounding and he's like why are you calling me Baby? Then he proceeded to call me Baby for the rest of the night. Dat's cool.
3. Bacchanalian sexual situations involving crime boss, Pilot, played by Dolemite director and frequent Fred Williamson collaborator, D'Urville Martin. Pilot knows how to get the ladies and feels most at home threatening Sheba from the comfort of his boudoir with no less than three scantily clad hos at his disposal at all times.
4. Vigilante justice. There's really no kinda justice like vigilante justice, unless of course you count angry mob with flaming torches justice, but this isn't that kinda movie.
5. Interracial girl fight on a luxury yacht involving Pam Grier smoking a cigar and wearing a fabulous maxi dress, ending with a pie to the white girl's face and Pam diving into the sea.
6. The line 'I told you never to come here.' I love this line. I use it frequently in real life. I love hearing it in movies. I also like 'I told you never to call me here.' I use that one a lot too. Sadly, it does not get uttered in this film.
7. Pam Grier in a wetsuit. Do I need to say anything else about this one?
8. An almost death by roller coaster. Pam knows how to intimidate these mob types, fo' sho'. She easily overpowers men three times her size, in one instance, holding a man's head down on the track of a roller coaster, and torturing information out of him, only letting up at the last second. This lady brings men to their knees - she can overpower anybody and look all sorts of fantastic doing it in skin tight outfits.
There you go! I needn't mention the off-the-chain soundtrack (the theme song is dynamite) and the seventies-licious interiors, the age old struggle of good versus evil, or even the exploding cars. What are you waiting for? Do you really need an excuse to see a wet-suited, cigar-smoking ass-kicking, name-taking Pam Grier? I didn't think so.
Posted by Jenn at 3:39 PM