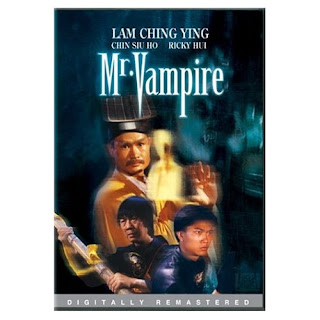 Hello, everyone, this is Aaron from The Death Rattle doing a guest review here on Jenn's blog. This review is for a surprisingly hilarious movie we watched yesterday: MR. VAMPIRE.
In Mr. VAMPIRE, a martial artist/mortician and his two bumbling students/assistants battle zombies, hopping vampires, non-hopping zombie vampires, and a succubus. The film is a horror comedy directed by HK horror film-maker Ricky Lau, and there's a huge emphasis on the "comedy" part here in MR. VAMPIRE. Trust me when I say that this movie is hilarious, and not necessarily in a "you have to understand the Asian sense of humor to think it's funny" kinda way (which is common to a lot of Japanese comedy/horror comedy that I've seen), but in a universal, almost American style of comedy with the exception of a couple of scenes involving some actual cultural aspects.
Going into the movie I knew pretty much nothing about it and neither did Jenn, so we were both surprised to see how "all over the place" this movie was in terms of what it had to offer (and don't forget Vivi's and my horrible hangover confusing things either - Ed.). The lead character Master Gau (played by HK action star/stunt man Ching-Ying Lam) is your typical, hard-assed martial arts instructor, and I guess you could say that he's also the titular Mr. Vampire character. His character, in a way, reminded me of a more comedic version of Rupert Everett's Francesco Dellamorte character from CEMETERY MAN. The similarities of the two characters weren't so much in personality but because of the obstacles they faced in their respective movies. Both men oversaw dead bodies and had to deal with the occasional corpse who absolutely refused to die. More so in Dellamorte's case, but you know what I mean. And while Dellamorte only had the companionship of his bizarre assistant Gnaghi, Master Gau had two much younger goofballs assistants who provided the comic relief of the film.
There are a few different things about the plot that keep it moving along and, more importantly, keep it interesting. One of Master Gau's assistants is being seduced by a succubus and the other is slowly turning into a vampire, all while a demonic vampire zombie creature is on the loose. Gau's role in the film is to keep his two young apprentices in line and keep them focused on the bigger picture, which is the destruction of the demonic vampire zombie thing. I think. I won't lie, the plot was a little confusing, but that's pretty much the gist of it. Quite honestly, it doesn't even really matter. This movie has martial arts, slapstick comedy and violence, zombies, vampires, and a succubus, so who gives a shit about the plot? MR. VAMPIRE brings a lot of different things to the table, but it nails pretty much everything that it tries to throw at you and never does a half assed job of anything, especially the comedy.
One thing you can definitely expect from MR. VAMPIRE is bad dubbing, but in this case I'm pretty sure that the dubbing was awful on purpose. There's a female character (a Chinese character... duh) with a British accent and another female character with what sounds like an Irish accent. Neither make any sense and the accents hav
e absolutely nothing to do with the characters. Randomness, people. Randomness is always the key to victory. Master Gau's voice is that of the whitest man you could ever imagine. Well, not like Napoleon Dynamite white, but Clark Kent white, I guess.
The funniest thing about the movie, in my opinion, was the fact that the characters in the movie, mainly Master Gau, broke the fourth wall on a few occasions and acknowledged the fact that they were in a low budget movie. The most hilarious of which was a scene where Gau commanded that his newly-infected vampire assistant "break dance" on a table covered with white rice (pure white rice apparently sucks out toxins and is somewhat of a home remedy for a vampire cure). When his assistant asked "why", Gau nonchalantly replied "I don't know, it's in the script".
Ultimately, MR. VAMPIRE is more of a comedy than it is a horror movie and it's definitely worth checking out. It got rave reviews from everyone in the room that saw it (ViVi says it's super number one!) and even Jenn's cats loved it (actually they didn't, but this wouldn't be a proper Cavalcade of Perversions post without mentioning one of her cats at least once). That's about it, people. If you dig martial arts flicks, comedy that borders on parody, and unconventional approaches on the vampire lore, then MR. VAMPIRE is your huckleberry. Now go follow my blog, you scum.
Posted by Jenn at 8:00 PM