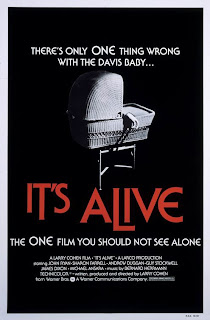 I normally don't talk about recent horror films here. I just don't, okay! I've said it before and I'll say it again, it's my blog and I do what I want. And what I want mainly concerns the oh-so- fabulous seventies, the excesses of the eighties, and whatever other obscure weirdness I can dig up. That's not to say I don't watch recent horror films, in fact, I watch most every recent horror film that comes this way, with the sole exception of the SAW franchise, which I think is utterly shitty and to be hated at all costs (but that my dears, is an entirely different rant and one I won't likely be making soon). I'll be the first to buy a ticket to whatever horror flick debuts at the local multi-plex and those direct to video new horrors get equal treatment, lined up in the netflix queue months before they come out, even the remakes. Hey, we gotta support our genre, people! For every three hundred bad horror movies that comes out, aren't there like at least two good ones?
Soooo, all that blah blah is intro blah for the IT'S ALIVE remake (2008). So now for some more intro blah. I'm a huge fan of the original Larry Cohen movie - it was one of the first 'thinking woman's' horror movies I think I ever got into back in the day. Sure, I cut my baby fangs on stuff like FRIDAY the 13th and NIGHTMARE on ELM STREET growing up in eighties. Horror movies had always been (and always will be) my modus operandi but it wasn't until seeing Cohen's 1974 environmental forces run amok on birth movie that I was like, hell mutherfuckin' yeah, horror movies can be smart and gory and fun all at the same time! I think I was probably like 14, but this was it as far as I was concerned! And it still is! The horrors of birth, of the human body! The attack on the environment! The sheer inventiveness of it, yet still maintaining the tropes of a B-movie with a Bernard Hermann score (I believe it was his last)! Oh hell yeah! It's a great body horror movie with a shit ton of other subtext and should be watched over and over again. (I really don't know what happened to Larry Cohen - he used to be soooo fuckin' good - GOD TOLD ME TO? Q, THE WINGED SERPENT? THE STUFF? The man used to be able to write a movie. How the mighty have fallen.)
Of course, and are you even surprised, I cannot say the same for the the IT'S ALIVE remake. A tepid, practically gore-less, look at what lengths a mommy will go to to protect her child maneuver, the remake lacks pretty much everything that made the original great. No LA setting, instead we get a boring old house in New Mexico, so definitely no monster baby hiding out in sewers. No large craniumed baby puppet, you might see a little CG claw here and again. And the body horror element? Well, I can't say I ever want to birth anything out of my vagina, so some of it bothered me a little bit, but still, it was tame at best. I felt myself checking the timer on the DVD player to see how much time this boring clunker had left. Maybe I'm not reading enough into it to deconstruct it enough - gasp! - but maybe I just didn't care.
Another pointless remake in a cycle of pointless remakes. Now if somebody remakes BASKET CASE, I will fight them. Hands down. I will win. Don't fuck with my BASKET CASE. Frank Henenlotter, can you hear me?! Do NOT ever let anyone remake one of the greatest movies of all time! You owe it to me for no particular reason!
Posted by Jenn at 8:24 PM