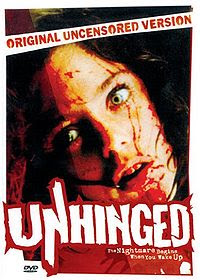 Stop me (don't really) if you've heard something incarnation like this before - three hotties (a blond, a brunette, and a much younger in relation to her two hottie friends naive chick) set out out on a road trip to a music festival. Something goes wrong in the middle of nowhere, car ends up wrecked, and the trio find themselves under the care of a family that seems, uh, not quite right. Shit hits the fan and everyone starts winding up dead at the end of pickaxe. Pedestrian, I know. Boring, probably. But UNHINGED (1980) does it just a little bit better and it has enough scenery chewing, weird dialogue, and a you-might-be-able-to-figure-it-out twist ending, to keep me laughing and singing it's praises at least for the length of this blog post.
I swear, this movie has Cavalcade written all over it. From the late seventies/early eighties? Check. Hottie protagonists? Check and check. Eschewing men and sex to the point of psychosis? Double check. Cross dressing and androgyny? Yep. A retarded sibling that 'wouldn't harm a fly'? Oh yeah. Lots of peeping/heavy breathing while girls take showers together? Got that too. Blood and guts? A little (there's only three girls to kill and it's gotta take up a running time of 1:20).
Incorporate all these elements, add a bit of a Norman Bates type of antagonist with just as domineering a mommy, toss with a little bit of overt psychosexual subtext, set the whole damn thing in a crumbling mansion, and give the actors the same lines to say over and over when explaining stuff that's already been explained, and there ya go! Cinema perfection, at least as far as I'm concerned!
What else do you really need to know? It's only an hour or so long, so it's not gonna totally take that much of an investment of your precious time but it does suffer from long periods of talking, so if you're a complete 80's gorehound, carry your ass somewhere else. But for my money (actually I didn't pay anything for this since Bruce gave me the copy), I'll invest my time watching an aging matriarch in a wheelchair lambast her daughter for being a complete slut in front of company and then menacingly attack the salt and pepper shakers. That, my dears, is my idea of entertainment.
Here, have a picture of the after-effects of the excesses of Thanksgiving. Bruce and Tuna relax on the couch drinking spiked iced tea while watching Naschy do his thing in WWvVW. 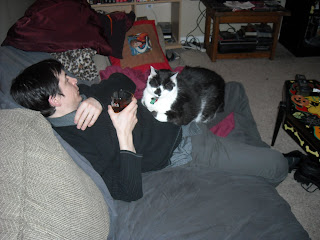