First Week of the October Horror Movie Challenge, Y'all! 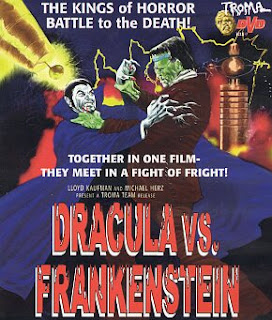 Day 1 - Al Adamson's DRACULA VS. FRANKENSTEIN (1971). What do you think of when you think of Adamson's pictures? Be honest. They ain't all that, but that doesn't mean there isn't fun to be had. Because here you have a fucked up looking Dracula helping a Anton Levey looking wheelchair bound Dr. Frankenstein bring an even more fucked up looking Monster (back) to life. There's a serum for immortality, a Vegas showgirl with a missing sister, a mute, riddled by alcoholism Lon Chaney, Jr. (which is depressing and sad and almost sick), an appearance by Forry, awesomely bad hair, loads of expository dialogue, a dwarf carnival barker, and all the trappings of something wonderful. To quote Sam 'It's not a great movie, but it's got great shit in it.' Well said. 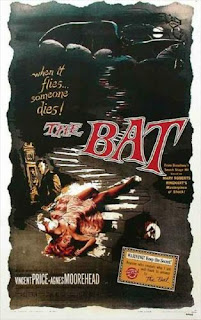 Day 2 - THE BAT (1959), starring Vincent Price and Agnes Moorehead. Fairly run of the mill mystery/suspense thriller. There's some stolen money, an old dark house, a masked killer, and a mild Scooby Doo ending. Vincent's sorta kinda evil here as a greedy doctor and Agnes is pretty annoying as a mystery novelist. The rest of the cast acts as they're supposed to and the killer has some pretty cool fingernails on his black gloves. S'aright. 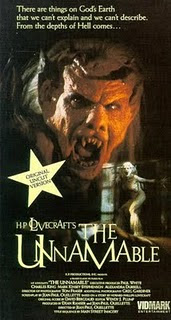 Day 3 - THE UNNAMABLE (1988). Lovecraft and urban legend inspired, this tale takes four college kids into a haunted house. Much POV demon breathing, practical SFX, and Miskatonic University references ensue, and we're unfortunately left wondering why this garnered a sequel, which I think I have on VHS somewhere here in the house but can't remember either purchasing it or watching it. And the box art totally spoils the monster! 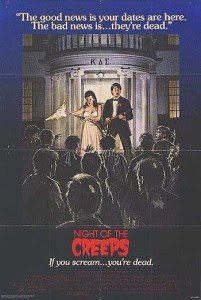 Day 4 - NIGHT OF THE CREEPS (1986). Perennial cult favorite, due mainly/mostly in part to Tom Adkin's chain-smoking cop with a vengeance performance, the gory practical FX, the horror movie in-jokes, and the mix of teen sex comedy with alien zombie plague plot. Throw in a zombie cat, a zombie dog, annoying frat douche-bags, some nubile sorority sisters, and some slug alien thingys that enter your body through the mouth and cause your head to explode and you have a pretty good 90 minutes or so. Schlocky and predictable, this one is still quote-worthy and an overall good time. 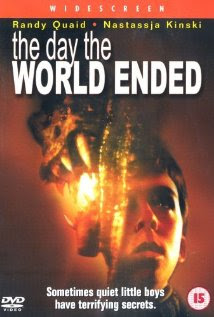 Day 5 - THE DAY THE WORLD ENDED (2001). This stars a broke ass Randy Quaid phoning it in as a doctor with a past in small town. He tries to keep everything on the down low with the particulars on how he really adopted Ben, an 'orphaned' kid with some pretty freaky telekinesis tricks. It's all fairly typical (I hate you, dad! You're grounded, son!) up unto a point and then pretty Dr. Stillman arrives (Nastassia Kinski, no less, but by no means as hot as when she was in CAT PEOPLE or in that nun's habit in TO THE DEVIL A DAUGHTER!), a big city therapist thinking she can save Ben. Some light B&E on Stillman's part in the name of therapy, and the fact an alien might be terrorizing the countryside performing brutal murders from those he seeks a certain retribution. There might not be an alien, though, because it could be all in Ben's MIND. And really, if you watched this far, you've already wandered off to the bathroom three times, made popcorn you didn't even want to eat and called attention to a cat's ear placement at least more than twice. This is that boring. Not even the Randy Quaid crazy factor can change that. I want to be punny and say something about my world ending or some such clever thing to tie it all into the title, but I don't care and I took an Ambien halfway through this mess. No apologies. 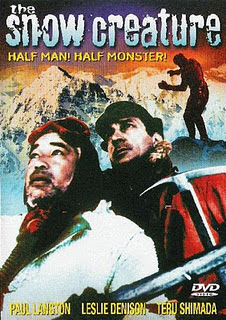 Day 6 - SNOW CREATURE (1954). An American botanist and his scotch-drinking assistant head into the Nepalese Alps accompanied by some scotch-drinking sherpas who declare mutiny when a yeti steals the lead sherpa's woman. All is forgiven however when the botanist and said alcoholic capture the yeti and bring it back to L.A. Hijinks ensue and honestly, I wish I could tell you more but the fatigue and sleeping pills took their toll and I passed out towards the end. And don't let the word hijinks fool ya, this one is played as straight as an arrow. It is from the mf'ing 50's. I just wanted to say hijinks in the same paragraph as sherpa, two words I love and rarely get to use in tandem. BTW, this still counts towards the challenge even though I fell asleep. I work very late into the night getting perverts like you drunk for my own monetary benefit so you all can get over it. 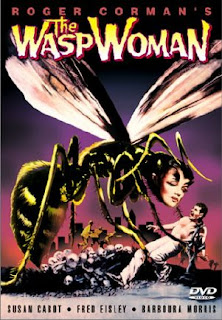 Day 7 - THE WASP WOMAN (1959). Roger Corman-directed psuedo-science schlock as it's intended to be. (And Jim Wynorski of CHOPPING MALL fame directed the 1995 remake!) Janice, the aging proprietor of a cosmetic company, tries an experimental royal jelly injection to save her failing beauty and enterprise. When the scientist she gets the serum from is hit by a car (plot point!), she must resort to other methods to keep the inevitable at bay; the inevitable being she turns into a fucking wasp. The cover art is excellent and all this plays out exactly how you want it to, but it's good, classic Corman monster fun.

The first week of the challenge is over! I had some fails and some near misses, but I'm still having fun! I have no idea what's in store for the second week, so stay tuned!
Posted by Jenn at 2:02 PM