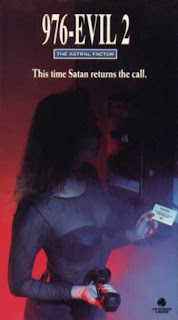 Day 8 - 976-EVIL II (1992) and directed by Jim Wynorski. Not nearly as good as the first one, because I used to be totally obsessed with that, due in part because I remember those hotline numbers you could call and my friend down the street in the seventh grade got in trouble with her mom because she was calling Freddy Krueger and Bobby Brown for like 19.99 a minute and it was a huge deal and I was instructed never to call those numbers EVER or else I would dealt with accordingly. So of course the fact that there was a HORROR movie about these sorts of things is going to go down as some awesome shit to a thirteen year old me. I had seen this one before, so I put it on, had a few glasses of red wine, and promptly passed out. I remember some such shit about astral projection and the complete and utter absence of Robert Englund and Stephen Geoffreys and that is about all. I still have the Vestron Video copy so I can revisit whenevs. 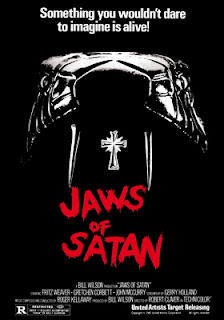 Day 9 - JAWS OF SATAN (1981). Lots of fun to be had here with snakes, Christian overtones, witchcraft, wayward priests, demonic possession, overt sexual symbolism, strong female leads, the first cinematic appearance of a ten-year old Christina Applegate, and a constantly-eating mortician. (I swear one of these days I'm going to compile a list of all the filmic morticians that are always fucking eating on camera.) This wasn't great, but it was pretty good. Me likey. 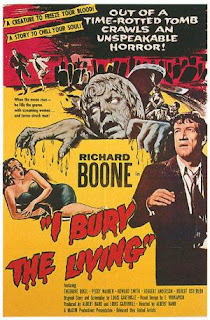 Day 10 - I BURY THE LIVING (1958). There's a new cemetery director and he thinks he can cause people who buy plots to die by some sort of push pin on a map voodoo shit and this plays out over the course of many, many minutes. I was on the phone for most of this, discussing some work drama, so Sam caught more of it than I did. I found it to be lackluster at best. 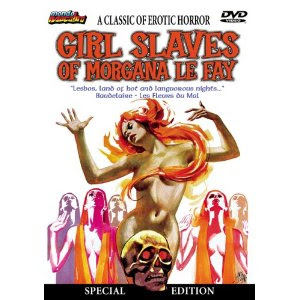 Day 11 - THE GIRL SLAVES OF MORGANA LE FEY (1971) - sexy sexploitation romp featuring a vampiric beauty intent on acquiring souls of other lovely ladies to continue her immortality, her dwarf assistant, and some all out Jean Rollin-style imagery from Italian director Bruno Gattilion. Good times, here, perverts, good times. Sexy ladies tied up in dungeons, a dwarf scheming to get in their pants all the while, and some other ethereal/exploitative stuff. I dug it. 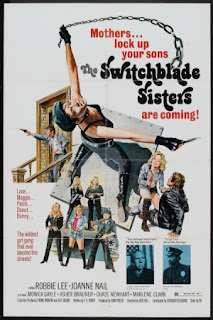 Day 12 - SWITCHBLADE SISTERS (1975) directed by the venerable Jack Hill. I remember this being a ROLLING THUNDER (Quentin Tarantino's early nineties distribution company) release, so when Sam had just started this on Wednesday night as I rolled home from work, I was down to watch, as I hadn't seen it when it had its revival on VHS almost twenty years ago. Good stuff here - girls, guns, and gang warfare - all with ridiculous fucking accents and plenty of knifings. Wish I hadn't waited so long, but I'm glad I did because I don't think I would have enjoyed it two decades ago. 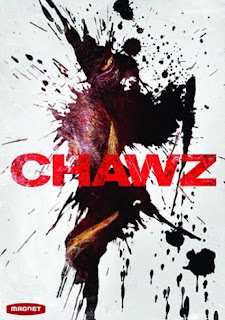 Day 13 - CHAWZ (2009). Korean wild boar invading the human sphere movie. The title is no accident, but there is nothing that can really redeem this, especially the attempts at black humor. Boring. I feel asleep. But you already know how I work late and drink lots, but this is this week's crap-fest. Total. 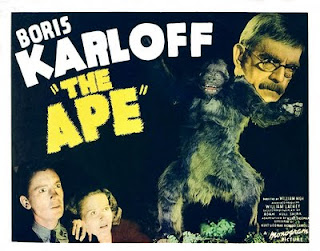 Day 14 - THE APE (1940). I showed up for the Karloff, stuck around for the lab-or-atories and circus stuff, and got drunk on the fact that Karloff had to don a fucking ape skin and kill people for their spinal fluid to find a cure for polio. I chose this one in part for its brevity (62 minutes and I'm tired, especially after a Friday night bar shift), but was mostly entertained.

There you go, pervs. Just a regular ol'week. Boris and girl gangs and sideshows and horror chat lines and dwarves and killer boars and Christian snakes and all sorts of other good stuff. You're welcome.
Posted by Jenn at 11:40 PM