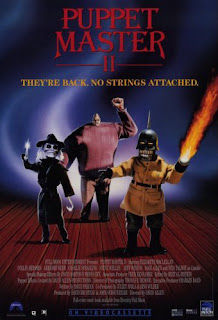 Day 15 - PUPPET MASTER II: HIS UNHOLY CREATIONS (1991). Oh Day 15, how I hardly remember you. Puppet Master II, what a shit show. Or maybe it's all the booze talking. In recent months, I've been revisiting some of these Full Moon Productions I loved so much in early nineties and realizing I was a very different person in the early nineties. (But I still dress relatively the same - boots, leggings, plaids.) There's an Egyptian brain serum and some side love plot involving reincarnation of a lost love (isn't there always?) but not enough here to keep me awake for very long. 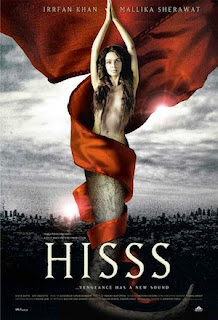 Day 16 - HISSS (2010) directed by Jennifer Lynch. Think Bollywood without the singing and dancing crossed with what? A snake goddess hellbent on revenge towards a wealthy old white dude with brain cancer that stole her snake lover while they were doing sex so she would pursue him and offer him an immortality stone in exchange for her lover. Yep. That's what this is crossed with. And it might sound like a good time (the snake goddess in human form is impossibly hot, as well) it's pretty craptacular. Cheap, cheap, cheap, but there are some good gore gags and the snake transformations are actually pretty nice. Not what you would expect from David Lynch's offspring, given her other work, but whatever. 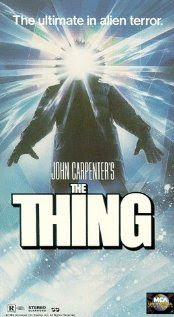 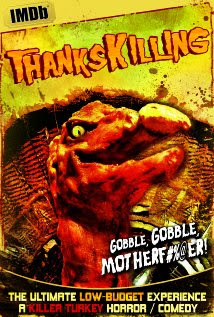 Day 18 - THANKSKILLING (2009). Recommended to me by my bar partner, who inexplicably smells EVERYTHING and has a serious fascination with boobs. (He drew a crude set on my birthday card last year.) This god-awful, but self-aware, horror movie making at its best (worst?) makes Troma look like they have a high class sense of humor. If you ever wanted to hear a turkey hand puppet say 'nice tits, bitch' then look no further. Misogynistic, poorly acted, over-the-top on purpose, and offensive as the day, this one clocks in at just 66 minutes, which seriously feels like an eternity, but not in a bad way. How many Jon Benet Ramsey jokes can you take in an hour? Watch this and find out. 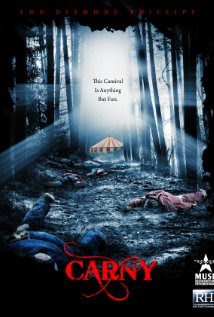 Day 19 - CARNY (2009). Starring Lou Diamond Phillips as a small town sheriff with an escaped cryptozoological beast on his hands. Maybe or may not be the Jersey devil, because it escaped from a truck at a carnival with Jersey plates. Nice try, crappy script. Sideshow stuff is cool, but I do find it hard to believe such an outfit would hit upon small, religious town Reliant aka Bumfuck Nowhere, USA. All characters are either assholes or you don't care about them, so when they become monster food, you continue with your game of Angry Birds and try to give even less of a shit. 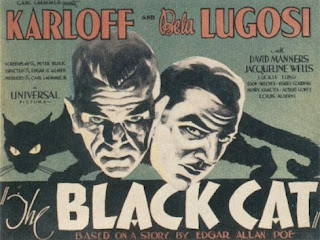 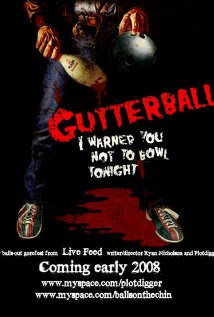 Day 21- GUTTERBALLS (2008). I wish I could tell you how much I loved this because the MANIAC inspired cover makes me giddy with glee, but it was Friday night, I worked until 3 a.m. and had to be up at 9 a.m. so I probably watched all of ten minutes. I awoke to the DVD menu starting over and no recollection of what had just transpired. It still counts, because this is my blog. I still have the DVD, so a repeat watching will take place.

There's the third week. Started slacking there towards the end, what with two late night bar shifts and the anticipation of birthday celebrations (read: drunkenness) getting in the way. But I'm still in. Don't tag me out yet.
Posted by Jenn at 6:25 PM