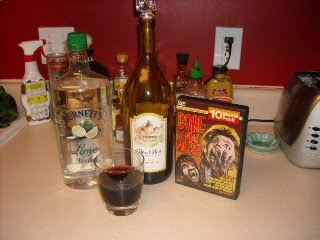 I hate weekends where I'm forced to take off work - and for what? Because of fireworks? I light fireworks off every day, bitches. Well, I don't really, but I should. It's on the list. Anyway, looks like the weekend off is shaping up to where I get super acquainted with the above bottle of vodka, the wine featured next to it (although I'm not really expecting that to last much more of tonite, really) and the Gore and More Ten Pack which includes The Werewolf vs. The Vampire Women starring my man, Paul Naschy, as well as Werewolf in a Girl's Dormitory, which I have always wanted to see and never have. Doesn't really take much to make me happy, honestly. So Happy Fourth of July or whatever, drink a lot, watch a lot of horror movies and enjoy a picture of a kitty riding a shark. Because nothing screams independence like a furry mammal atop a prehistoric killing machine. 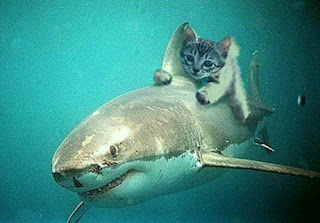 And because there aren't any Fourth of July themed horror flicks out there, unless you count Silver Bullet, which I think takes place during Fourth of July. Hey, it's got a werewolf (who's also in Twin Peaks AND People Under the Stairs, not in werewolf form though, unfortunately, how different would those aforementioned have been, huh?) AND Busey AND Corey Haim in a souped up wheelchair. I might just have to add that to this weekend's festivities. Oh, sorry, you were enjoying the picture of the kitty with the shark. So sorry.
Posted by Jenn at 7:52 PM