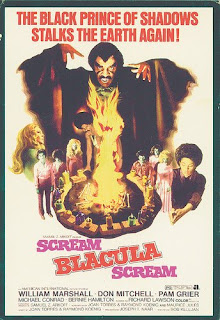 Sream! Blacula! Scream! Whenever I hear or think of that title (which ain't all that often, but often enough to assure me I am, indeed, not normal), I think of the one sheet in the shop where I get tattooed. It's the Spanish language version of the one sheet and, of course, since everyone knows my affinity towards the Spanish titles of horror movies, it's way better sounding - Grita! Blacula! Grita! So even though I'm not Spanish and my Spanish language speaking skills are utterly lacking, I still call this one by its Spanish name. Just saying Grita! Blacula! Grita! over and over completely out of context until people start to look at you weird is more fun that actually sitting through this movie in its entirety. Although that's not to say Grita! Blacula! Grita! isn't without its merits. It's actually pretty darn fun, at the very least, pleasing aesthetically.

Made in 1973 and directed by Bob Kelljan (the same guy that directed Count Yorga, Vampire, along with a host of Hill Street Blues episodes), Scream Blacula Scream was was initially called Blacula is Beautiful. How to say that in Spanish? Blacula es Hermoso, I think. Blacula es Guapo, maybe? Regardless, the movie begins at a voodoo priestess' funeral. She forgot to name a successor, and her son, Willis, thinks he's the rightful heir to the voodoo throne. The rest of the practitioners think the lovely Lisa (Pam Grier) should take over and Willis gets pissed. As part of his revenge, he procures the bones of Blacula from a hobo/dethroned voodoo priest, and takes off his shirt, oils up, dons a necklace of (human?) teeth, lights some candles and strokes a pigeon before killing it. He rubs the pigeon blood on the bones, chants some voodoo shit and the bones start sparking and flaming. Satisfied that the ritual is complete, Willis grabs a can of Coors and sits at the table.
He doesn't have to wait long before Blacula shows up, fangs barred, and bites Willis right on the neck. Willis' little plan for absolute power has backfired and Blacula quickly turns the tables, making Willis his slave. Roll opening credits.
I'll spare you the excruciating minutia of the rest of the movie, seriously, it's not worth it, and provide the rest as follows: Blacula (played to the hilt by William Marshall) spends the rest of the movie turning Willis' friends into a legion of the undead for his own protection, while setting his sights on Lisa, as a love interest and also as a avenue to rid him of the voodoo curse, her being a voodoo priestess and all. Meanwhile, Lisa's boyfriend, Justin, an ex-detective and collector of African art and voodoo artifacts, tries get to the bottom of who Blacula really is (he gave Justin his African name upon meeting him at a party), and finally, with the help of cop Hardy, and the occult section of the library (which is disappointing, it's just in the regular part of the library, not in a creepy library basement or anything, it's simply in a section called Occult) figures out Blacula's real identity, which isn't a huge secret to begin with, in that he discloses his real identity to Lisa, turns into a bat in front of people readily, has no reflection, doesn't show up in photographs, and wears a very Dracula-like cape at all times (which most of the dumdums in the movie think is a sign of wealth).
Marshall absolutely OWNS the role of Dracula, and is almost Shakespearean in his delivery. He manages to exude quiet dignity, whether he's discussing rare ancient African art, turning into a bat, or draining the blood outta some hot mama. When Justin asks Blacula (who I called B. in my notes so I keep affectionately referring to him as such in my head; Willis call him 'Blac') about vampires and Dracula, Blacula remains dignified, albeit curt, as he tells Justin to mind his own damn business. I could watch Marshall act like Dracula all day, seriously. He might actually be my favorite Dracula. Just look at him. 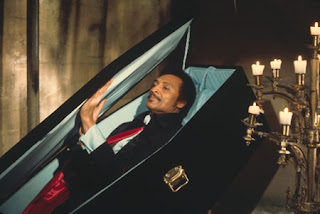 I'm a bit upset by Grier's character, however. She's terribly underused as the goody goody Lisa. She's supposed to be a voodoo priestess, right? Shouldn't that involve her taking off her clothes, dancing around naked and chanting, most likely covered in some sort of animal blood, for most of the movie? Would it have killed her to sex up the scene where a female vampire rises out of the coffin and beckons to her? Just as I could watch Marshall play Dracula all day, I could watch Grier do nothing all day; I'm just not used to her as the good girl. 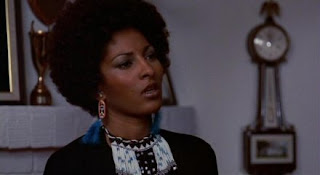 What the movie lacks in plot, pace,and nekkidness, it makes up for in fashion and interior set design. Oh, the fashion! I swooned. I felt faint. I think I even got dizzy at one point over the fashion. And the set pieces! Oh, the set pieces! Willis' house is some sort of 70's groovy version of a haunted house, complete with gaslights and totally outrageous velvet wallpaper. The fashion is almost a parody of 70's style it's so over the damn top, and clashes with the art design of the rooms. I found myself watching the movie for the outfits more than anything else, particularly Willis'. If you watch this movie for anything, let it be the clothes.
Oh, and towards the end during B.'s exorcism (another scene that begged for Grier's nudity, although she does get a little sweaty), Lisa uses the cutest little wee voodoo doll carved in B.'s image, complete with little cape. Feast your eyes: 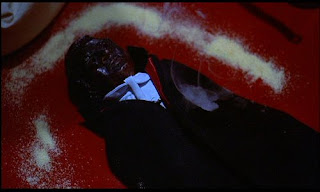 I want one. Seriously. Someone make me one and send it to me.
So there you have it. Not the greatest movie in the history of the land, but still not unenjoyable either. And although the trailer promises 'The Bloodiest Legend of Our Time' and there really wasn't all that much blood, you could definitely waste time on worse. Dracula's soul brother is back, y'all.
Posted by Jenn at 10:01 AM