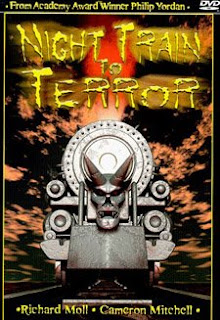 If I told you one movie contained within Nazis, stop motion animation, a Russian roulette death club, breakdancing, a porno scene involving a squaw and an explorer, an omniscient narrator, a carnival, and Richard Moll in a dual role, would you be all like, hell yeah, sign me up, that sounds like a real coherent good time! Or would you be like, hmmm, I don't know, it sounds like a leeetle to much for my poor senses to take in right now.
Such is Night Train to Terror. If I was to describe it to you play by play, you would be like, hell yeah, Jenn, that sounds right the fuck on! But then I would have led you astray with my comedic writing style (ha!), and you would watch the movie expecting this great marvel of cinema, yet you would be sorely disappointed. Sorely, my friends. And then you'd hate me. Since I want nothing more than to win your love and adoration, I won't write a play by play of Night Train to Terror. I will merely say this: when you have a movie with a frame type situation (here it's God and Satan on a train discussing the fates of three people - those who you see in the vignettes involving Nazis, squaws, Russian roulette, et. al.) make sure....wait, I'm not really sure what you should make sure of. That shit makes sense? You know, I don't often care if stuff doesn't make sense, in fact sometimes I rather enjoy it when it doesn't. But this movie made little sense and not in good, I'm watching a fever dream, let me sit back and enjoy it kinda way. If a movie can take you (in fifteen minutes of screen time or so) from seeing a girl selling popcorn at a fair to the same girl and her lover, as well as ex-pimp, all strapped to electric chairs while a computer chooses who gets to be electrocuted, it's done something. I'm not sure what. And if that same movie can take you from watching 'band' (in the loosest sense of what constitutes a band - drums? guitar? lots of dancing while wearing headbands? One song to their repertoire?), to seeing a Nazi demon mow down with a machine gun imprisoned females playing the violin for the entertainment of Nazi troops, I guess that's talent. I shouldn't be so harsh on NTtoT. It makes some pretty impressive leaps.
I'm at a loss for words. And I love bad horror movies! You know, as I was watching this last night, I didn't even feel like finishing my glass of wine! I went to bed at 11 pm! Well, I tried watching Drive-In Massacre but was too exhausted emotionally after NTtoT, I couldn't even commit to another movie! I hope I'm okay. I feel a little better now, thank goodness. Your sympathy is appreciated.
Posted by Jenn at 12:28 PM