Werewolf in a Girl's Dormitory 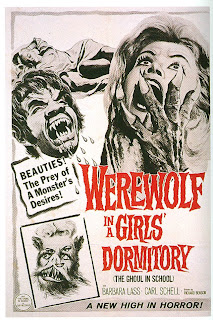 The whole tale begins with Dr. Julian Alcott arriving at a girl's school, a sort of reformatory for young women who have fallen in trouble with the law. Alcott's a cutie, by sixties standards, I guess, and the girls are excited that he's in their midst. One girl, Mary Smith, even faints at the sight of him, as he makes his way to meet Director Swift. Upon meeting with the director, Alcott alludes to a mysterious past but we learn he was cleared of all charges. He's at the school to start fresh and leave his old life behind.

The night of Alcott's arrival, Mary, the girl who fainted earlier (or was she faking it to get out of gym class?), sneaks away from campus to meet a lover, presumably, as wolves howl menacingly. Make no mistake, this is a meager attempt at atmosphere, and by no means sucks the viewer in. It's like, oh, some wolves are howling. How scary. Hold me please. Mary meets up with Sir Albert Whiteman and tells him she's gonna blackmailing him. Seems they were knockin' boots maybe and now she wants Albert to spring her from the school. He tells her no, she was sentenced there by the court, and he can't get her out. But isn't she already out? She broke out of the school pretty easily, she just climbed over a wall, no alarms or releasing of the hounds or anything, couldn't she just run away into the night? She doesn't do this and decides to get mad at Albert and huff off into the night. As she storms off, a wolf man pursues her in a classic scene we've all come to know and love - young woman runs through the woods pursued by beastly other and is subsequently killed and possibly violated sexually (although that's pushing it here).
I can dig it.
Alfred, unawares of Mary's fate, returns home to his wife, Sheena, who is not at all befitting of the name Sheena. When I think of the name Sheena, I think of a teenager with drawn on eyebrows who works at a smoothie place in the mall part-time, is addicted to text messaging, and will cut you if you look at her wrong. Sheena in this movie is an aging old bitch given to wearing flowing robes and and berating her husband. There's lots and lots of talking between Alfred and Sheena and she may or may not know about Alfred's affair with Mary and she also kind of alludes to the fact that Alfred's a wolf man, but not really.

The next morning, Mary's body is discovered and taken back to the school. The coroner's report names wolves as the culprit, but Alcott and Sir Alfred, upon examining the body, know better. Priscilla (who is at least ten years too old for her role) enters the picture at the point, and as a friend of the deceased, she's determined to find out what really happened to her friend. Seems Priscilla knew about Mary's blackmailing scheme and sees Director Swift about it. But since Sir Alfred never signed the letters and Priscilla doesn't have them in her possession, nothing can be proven. It's also at this point that Priscilla sees a telegram alluding to that mysterious past of Alcott's. So there's all this correspondence flying about and speculated on and blah blah and Priscilla starts to think Mary was assassinated.

So Priscilla strikes a deal with creepy grounds caretaker, Walter, to find out more about Mary's death. He leads her off grounds to a house, where she meets with Sheena, who gives her a wad of cash in exchange for her to stop meddling, I suppose. I was kinda unclear on why Sheena gives her the dough. They talk and blather about stuff, it all pans out very slowly, and Priscilla leaves and runs into Alcott, of all people, in the woods in the middle of the night. While Priscilla and Alcott discuss wolf traps, Sheena returns to her other house (the previous house was just her meeting and giving money to people in exchange for their silence house), and is injected with something that kills hers by a black gloved killer. Then Priscilla gets attacked by a wolf man but a dog comes out of nowhere and bits the wolfie on the hand, so Priscilla can live and keep meddling.

The next day at Sheena's funeral, Walter, Alcott, and Sir Alfred are all limping or holding their arms funny. Anyone of them could be the wolf man. Sandy, another friend of Mary's and Priscilla's, fingers Alcott as the killer since the killings didn't start happening until he arrived on campus, and then the truth of Alcott's sordid past is forced to come to the surface. Seems he meddled in a lycanthropic viral infection of some sort back at an asylum for the criminally insane where he use to be a medical doctor. He fell in love with a beautiful patient suffering from thinking she was wolfen, and he had to put her down. He was, of course, discredited, and was forced to become a Teacher of Science at the girl's school. Oh, and he injected himself with the virus once, to see what effect it might have had on a human. It's shaping up that Alcott's our wolfie, but don't be so sure yet. I'm sure you're just dying with suspense.

In what I'm sure the filmmakers thought was a delightful twist, the identity of the lycan is revealed (it's not Alcott, Walter, OR Sir Alfred) and since I can't remember properly because I was so bored, it's unexplained as to why this individual is the wolf man or why he's doing what he's doing. I guess he got injected with the virus somewheres along the way. Seriously, I was in an out of consciousness while watching this snoozefest, you're lucky (I'm lucky?) I remember what I do. I had to bear in mind since this wasn't an exercise in sleaze, that it's also not a movie about the struggle of the wolf man, like the Universal Larry Talbot movies.
So instead of being a sleazy bestial orgy with lots of shirt ripping, werewolf transformations, and unbridled sexuality like the title invokes, we get a tepid, soggy whodunit that happens to feature a wolf man virus. And there aren't even that many wolf scenes! Maybe three? Four, tops. To its credit, the acting is solid, I suppose, and Priscilla isn't terrible to look at, either, yet she's missing something and is kind of annoying with all her meddling.
If you dig your werewolf yarns ramped up, and and you don't mind cracking a book, I highly recommend Ray Garton's werewolf novels, Ravenous, and its sequel, Bestial, which I just finished. I think those two books have threatened to ruin me on werewolf cinema for the rest of my life, since they are just so filled with werewolf sex and werewolf violence, in a good way.
Posted by Jenn at 8:49 AM