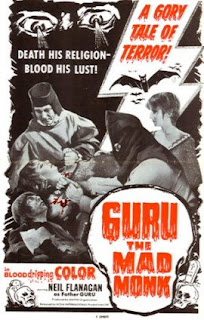 At the medieval Lost Souls Church of Motavia, Father Guru has fallen on hard times. Seems this particular church is on an island in the middle of nowhere and Mommy Church has all but forgotten all about it. Guru is forced to make ends meet by imprisoning losers brought over from the mainland and seeing to their eternal damnation. He'll get a bonus (I guess, some of it's a little hazy, and I was also dealing with an ear infection while I was trying to watch this) if he punishes them in a corporeal manner. The church is actually the least of Guru's worries, since he has a couple of special needs mouths to feed - Igor, his hunchbacked assistant, who is, um, a hunchback (apparently Milligan was a big 'fan' of the crippled and included a crippled character in many of his films), and Olga, his lady friend who has an austere diet, meaning, um, she drinks blood.

Just as things are looking their worst, the lovely Nadja is brought in kicking and screaming, condemned by the church because she was thought to have murdered her newborn baby. Seems that it was all just a big mistake, because the baby was actually stillborn and Nadja was just trying to give the poor thing a proper burial and forget the whole nasty business because the baby was actually the product of Nadja's being raped by a gypsy king who had also imprisoned her. Luckily, her ex-boyfriend Carl (how's that for a medieval name?) has taken a job as Guru's lackey and finds Nadja locked up. Carl decides he'll appeal to Guru on behalf of Nadja and hopefully get her released from the church jail.

Guru agrees fairly readily, at least I think he does, but instead of just letting her go free, he devises a plan in which Olga will mix up a potion causing Nadja to just appear dead so they can smuggle the body out of the prison and resusitate her with an anecdote also prepared by Olga. Guru's mad, now, don't forget, and there is a catch to this plan. In return for sparing Nadja's body, I mean, her soul will still be condemned to eternal damnation, Carl has to get dead bodies from several towns over and sell them to medical students in exchange for gold. A man in love's gotta do what a man in love's gotta do, and Carl sets about his mission wearily.

First things first though, Olga wants in on the deal too, and she's not gonna part with the potion until Carl offers to get her some fresh blood. She's sick and tired of having to eat the coagulated blood left over from the Guru's executions. It's just not the same as some nice fresh product and I can't say that I blame her. No blood = no potion, so Carl's gotta add that to his grisly shopping list.

Meanwhile, we get to see the Guru in action, saving souls. And by saving souls, he executes people. It's an eye for an eye literally here, for the unfortunate peeping tom. The shoplifter gets her hands cut off. I think a branding iron is also used on somebody (my ear infection was making it really hard to concentrate). Don't expect any stellar gore here - the maiden's dismembered hands are obviously mannequin hands; the peeping tom's eyeballs look more like ping pong balls or maybe even marshmallows, it's hard to say. But Guru ain't all bad, because, true to his word, he manages to slip Nadja the potion here, and she is whisked away by Carl.

Carl's delighted to have Nadja free and alive, but before they can run off into the sunset, the Guru drops the nicety and demands Carl go out on another body snatching errand. This is when the monk really flies off the handle, arguing with himself in a mirror (Taxi Driver, anyone?). He goes from nice, kind Father Guru to batshit crazy Guru the Mad Monk. He says, 'You really should be nice to Igor, he really does love you.' Then crazy comes out and retorts, 'You go to hell!' It's seriously a tour de force performance, because I feel like Guru really does want to be good, and I enjoyed every second of it. His evil side just keeps gettin' stronger and stronger. It's actually almost sort of believable and I actually almost sort of felt bad for ol' Guru.

If things couldn't get any worse, Mama Church, who hasn't forgotten about Guru after all, has sent Father Polanski to remove Guru from his post at Lost Souls because of his blasphemous relationship with Olga, who isn't necessarily crazy, but was once bit by a beast at some undisclosed location and turned into the Soul of Darkness she is today. But Guru loves her and has promised to care for her. And I think (I know, I need to stop thinking so much) that Guru was also bit by a similar (?), the same (?) beast that turned Olga, so that's why they have this special connection (?).

If that whole deal wasn't enough to get Guru excommunicated, Polanski takes it upon himself to interview Nadja, who's been holed up in the vestry while Carl's off on his corpses for gold mission. Nadja tells Polanski of the parishoners who arrive but never leave, like Christine, a young pregnant woman who Olga drained of blood, or Lars, a sailor, who wants a mass before leaving for sea, who Guru took the opportunity to dispatch and add to his growing body count. This is all Polanski needs to hear, and the whole thing swirls out of control for poor Guru and Olga - Guru even tries break up with Olga and get her out of his life so he can go on business as usual. But Olga doesn't take this news very well and stabs herself. It's mutiny after this and a happy ending (maybe?) for Carl and Nadja. Fin.

Oh, that Andy Milligan! He had actually admitted that Guru was his worst film and disowned it. I thought it was a blast, as well as a very overt attack on organized religion, and Lord knows I love an overt attack on organized religion. The subtext don't run too deep here, folks, and if the dialouge doesn't tip you off right away, Guru's (aforementioned) actions will. At one point, Guru says, 'I preach one thing and continue believing another - self survival.' He preaches about God, yet he kills people, damning them to hell. So he's a duplicitous character; he's also a hypocrite.

Jimmy McDonough, in his fascinating look at Milligan in his book The Ghastly One, says, 'strip away the medieval costumes and canned music in Guru and everything can be viewed in terms of a street pickup. The exchanges are all so sleazy and desperate. Don't trust anyone, every man for himself, perhaps I'll do for you if you do for me' (219). Everyone's out for themselves; we see how easily Guru's willing to forsake Olga to save his own ass. Even the 'happy' ending is unconvincing - what's going to happen to Carl and Nadja after all they've already been through?

Despite the serious stuff, Guru is a great sleazy time! The costumes are a scream, fabric everywhere! I'm assuming Andy made all those outfits because despite being degenerate indie director and all-around sleaze ball, Milligan was also quite the accomplished dressmaker. All the characters are totally fucked up and no one really gets out unscathed. I'm not desperate to take a shower after watching this, maybe I would be if it had lasted longer (it's only about 55 minutes), but I'm sure Milligan could make me want to bathe in scalding water given the opportunity. I'm sort of a novice when it comes to his movies - this is my third; but I'm willing to start the shower now in hopes of being really repulsed (in a good way) later.
Since we're on the subject of Milligan , I've been after an original Midnite Video VHS copy of the Rats are Coming! The Werewolves are Here! forever now - since before I even knew Milligan's name. I love that title! I think it might even be the BEST title EVAR!
Posted by Jenn at 8:49 AM