Andy Milligan's The Ghasly Ones 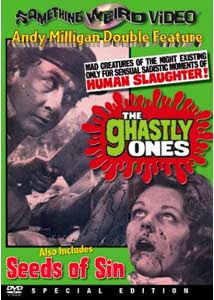 So I recently posted about reading Milligan's biography, which was totally sleazily entertaining. Some of it even read like fiction it was so over the top in its putrescence. But it's like slowing down to gawk at a car accident, no matter what disgusting-ness you might witness, you want to see it any way. And Milligan has earned his reputation as a THE sleaze peddler of the grindhouse era of 42nd street. The Ghastly Ones is my first filmic foray into the works of Andy Milligan. There have been attempts made by me to procure a VHS copy of The Rats are Coming! The Werewolves are Here! for many, many years now, to no avail. I have actually purchased it on numerous occasions, only to have the money refunded to me because the seller didn't have the tape. If anyone wants to get me a pressie, my half-birthday is coming up, so if you have a spare copy of Rats! Werewolves!, email me, and I'll pay the shipping! Anyway, onward with the review.

1968's The Ghastly Ones opens with a nice hetero couple, Ada and Robert, prancing around a private island. They're dressed in period garb and carry an ornate parasol but they speak as if it's present day. Ada gets tired and decides to have a rest, while Robert goes off exploring. Robert quickly meets a gruesome end, becoming the victim of a disembowlment via some lunatic's bare hands. Ada quickly comes looking for her lover, natch, and meets a similar fate, although she's hacked to bits with a machete. Roll opening credits. (Sidebar: all the costumes were made by Milligan's dress shop, Raffine. I think it's weird that sleazemeister Milligan was a skilled dressmaker. That's just me.)

Then we meet Victoria and her husband, Richard. They receive a letter from Victoria's deceased father's lawyer, Dobbs. The letter tells them to meet him in New York but since they don't have the money for the trip, they live in Philly, they seek out Richard's effeminate brother, Walter, to lend them some cash to go meet up with Dobbs. The scene with Walter gives me some serious John Waters vibes. Walter is a overacting queen with maybe a tinge of a Baltimore accent. He spends money like it's water and enlists Victoria and Richard to please stop by Tiffany's for his crystal because he simply doesn't trust the post. He then orders Vicki to fetch the tea since his manservant is out at the moment. He always eludes to an incestuous relationship between his brother and himself. "No one knows how much Richie means to me," following by Richie's retort, "You have abnormal tastes."

Next, we're introduced to William and Veronic, who receive the same letter from Dobbs. Veronica and Victoria are sisters (we'll meet Elizabeth, the third sister in a few moments, at a luncheon), and Veronica and William's presence is required by Dobbs as well. They suck each others fingers and wax eloquent on the power of money - "It always takes money to bring people together" and agree to go to NY asap.

The whole thing seems to be set in present day NY, but all the characters wear period costumes. They speak colloquially, but try to seem overly polite, you know, like people did back in like 1875. So they go to the lawyer Dobbs, who looks like some ancient Russian gypsy lady, and he reads the sisters' dead father's, Mr. Crenshaw's, will, which states, oddly enough, that in order for the will to be carried out, the sisters and their husbands must go to Crenshaw House (the house on the private island in the opening sequence), and live in "sexual harmony for three days." Then the will be fulfilled and a trunk in the attic will be opened. Sounds fair enough. The sexual harmony part comes into play because apparently Mr. Crenshaw did not love his wife, the sisters' mommy, at all, and was only only the island five times. It was in those five visits that his three daughters were conceived, so no sexual harmony was taking place for much time on that island. Weird request, but hey, the girls want their money, and they'll do what it takes to get it.

The three couples then arrive on the island and meet the servants, an imbecile, Colin, with horrific fake teeth, his sister Martha, and Haddie, the matriarch type head servant woman. Upon meeting Colin, he kills a rabbit, a scene I remember as described in Milligan's bio. It seems Milligan actually wanted the actor to kill the rabbit and eat from it, and the actor and the rest of the cast was too squeamish, so Milligan took matters into his own hands and killed the bunny himself. For reals. I can watch any kind of violence towards humans all the damn day long, but I had to watch the bunny murder through my fingers, especially knowing that it was actually real. I'm delicate when it comes to anything involving animals. Okay, so it is effectively demonstrated that Colin, and the other two, are pretty much lunatics. Then the real carnage starts.

Each person is slowly picked off by a figure in a black cloak. I think it's Donald that's killed via a rake through the neck, which is the second movie I've seen in as many days where someone meets their end this way. Elizabeth's head is served for dinner, and everyone starts to freak out and unravel and wonder who's next and who's the killer. (Well, I wonder this, the cast really doesn't. They mostly just cry and hold each other.) Colin is the obvious choice, but he's really too dumb. And I guess it doesn't really matter, because at this point, the film has nearly reached its 72 minute running time, so it's wrapped up quickly, with no real final act to speak of. The second part is all just falling action. The film itself focuses on and proves family's are fucked up and dysfunctional and women are cruel. These are themes apparently explored ad naseum in a Millgan picture.

The Ghastly Ones wasn't really what I was expecting. I was expecting to feel gross after I watched it, like after I watched anything the Findlay's ever had their name attached to. And I wanted to . I wanted to be cinematically violated. But instead, I felt like it was a mediocre horror picture from the late 60's. Maybe this is Milligan-lite? I tried to watch Seeds of Sin after I watched this one, but of course, I passed out. It was like 11:30, waaaaaaay past my bedtime. But Seeds opens with an orgy scene that seems more grindhouse-y and sexploitation-y, so maybe Seeds is more Milligan. At least more of what I was expecting from the man. I guess this was a good starting point and it wasn't without its moments. As I get further into his oeuvre, which I plan on doing, we'll see if he lives up to his reputation.

Wonder why Milligan, who has received a growing cult status over the last decade or so, based certainly in part on Jimmy McDonough's excellent bio on the filmmaker, isn't as revered as John Waters, Ed Wood, David Friedman, Doris Wishman? Hell, even Michael and Robert Findlay.  Something to ponder....
Posted by Jenn at 8:43 AM