The Findlay's Touch of her Flesh 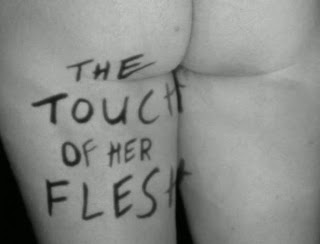 So having watched my first Milligan film, I was thinkin' a lot about watching Findlay movies. Both are grindhouse-era type of stuff, the Findlays I guess I know really little about, since I've read Milligan's bio. I used to think I knew a thing or two about this stuff and then I was schooled by reading the Milligan book.  Hey, maybe be I should write that Findlay bio, get down and dirty and find out all of the stuff about Michael and Roberta like in the Milligan book. I know I would be bound to find out some seedy stuff. Nobody steal my idea. I've got a Doris Wishman book in the works too.
So I posted about the Ghastly Ones and I was thinking about Milligan and his reputation and about the Findlays and their reputations (Roberta considers herself THE first female pornographer) and decided I would revisit their infamous FLESH trilogy, starting of course where it began, with The Touch of Her Flesh. (Disclaimer: I watched this last night, numerous substances were abused. I have seen it before, but my notes and review may or may not reflect this. Also, it is Friday, but I am in, and drinking heavily after a looooooonnng day of waitressing, so bear with me please. Or not. It's up to you entirely. I have notes, but whether or not they are coherent is entirely my fault.)
My first note for the Touch of Her Flesh is 'Boobies!'. This is the first film I have ever seen that projects the opening credits onto body parts, mainly boobs and asses. It's a nice touch, one I would like to see implemented more often. So that's cool. Then we are introduced to Claudia and her hubby, Richard, who I will call Stanley. He leaves on a business trip or some shit and Claudia invites her hot young piece over to grope her outside of her underpants and kind of lay next to her and rub around a little bit. Then she takes off her bra and smothers him with her tatas and it's not at all sexy, but Claudia could be sexy if the scene wasn't so awkward with the lover guy wearing his trouser pants and groaning all the time. And all of this is set to classical music.
Then lover man fakes going down on Claudia and she seems to really enjoy it. She's totally faking it. And then Stanley/Richard returns and watched Claudia through the window and gets disgusted and runs off into the night. We get some great exterior vintage NYC shots here and then old Stanley gets run over by a car. The expression on his face while he's watching Claudia in the throws of fake ectasty are classically perverted  and I love them. He wakes up in the hospital and gives them a fake name and goes out into the world to kill all women from here on because of the wrongs he has suffered by Claudia's cheating. And now he has an eye-patch and is giving off some serious I-look-like-Ed-Wood but with an eye patch vibe.
So Stanley/Richard retires to a rented room with his eye patch and his modus operandi to rid the planet of all women, because, by his reasoning, they're all sluts and they (his words) bury all manhood deep within their female souls. He tells us this in an ominous sounding monologue while we're treated to footage of a woman masturbating with a some sort of fur stole and another woman stuffing a cardigan into her vagina. I am really having trouble putting this into words because it's seriously like nothing I've ever seen before. I guess it's exactly what I describe it as, although I'm not sure if I'm representing it accurately. Then he stops his voiceover and some more ladies masturbate and there's some shots of a flower in a another woman's pubic area and then some breasts are fondled and all the while some more classical music is playing.
Now, I don't mean to leave you hanging, but this is going to have to be a two-parter, maybe a three-parter, because my buzz is kicking in and there is A LOT left to describe. I'll hit it up manana with more sleazzzzzzy details, I promise you. There's lots more swingin' sexy action in this one and it's only the first part of the trilogy! This might take awhile. So get ready. Tomorrow I'll regale you with lots more sexy sexy sexy! Cause it just gets sexier and it gets a helluva lot rougher too.
Posted by Jenn at 9:35 PM