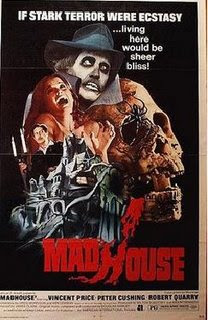 Once again, my habitual drunkenness allowed me to watch Madhouse a first time and barely recollect any of it. So when I rented Theatre of Blood and Madhouse was on the b-side of the dvd (do dvd's have b-sides?), I started to watch it and was then faced with the hazy revelation that I had probably seen this movie before. I figured I'd likely passed out before the end, so decided to stick it out a second time, this time having only drunk three glasses of cabernet out of a box.

1974's Madhouse has a powerhouse of a cast. Vincent Price and Peter Cushing take the lead and supporting roles respectively and Basil Rathbone and Boris Karloff play minor roles in the movies within the movie, but more on that in a sec. Madhouse is the story of Paul Tombs, played by Price, a horror actor who goes off the deep end after his fiance is killed ala one of his popular films and the grisly murders that happen years later.

The film opens with a New Year's Eve bash, hosted by Tombs. He's a successful horror screen actor most famous for his role as Dr. Death, a masked, caped psycho who enjoys dispatching cutie pies my slitting their throats, boiling them alive, or hanging, amongst other fates. Tombs treats his party guests to footage of him stringing up some nubile young thangs and being brought to justice by a fire weilding mob. That's typical of how I start my New Year's Eve parties, for sho'. Then after introducing his hottie blond fiance, a toast, and a catty conversation with a producer who reveals blondie was a porno actress before her Hollywood debut, Tombs argues with blondie over her former career and leaves his own party to go pass out. Some time passes and Tombs awakens to go apologize to his soon-to-be wife and finds her seated at her dressing table. As he approaches to make his apologies, her head falls off, she's been decapitated, Dr. Death style. Is Tombs responsible for the murder? He couldn't possibly be! Or could he have? Duh duh duhnnnnn. Cue dissent into madness and this is all in the eight minutes before the credits roll.

Next time we meet Paul Tombs, it's been several years. We learn he's been in and out of mental hospitals after porny's death, and at one point, was even arrested for wandering Hollywood Boulevard dressed as Dr. Death. But he's cured now and his old pal, Herbert, played by Cushing, who used to write the Dr. Death films, wants Paul to come to London to revive the Dr. Death character for television series. Paul agrees and boards ship for passage to London. Whilst on board, a budding screen starlet stalks him and will continue to stalk him when he arrives at Herbert's house. More on that in a moment. So here's, I guess, where it starts to get weird.

Paul goes to Herbert's house in London and Herbert's all like, let's watch some of your old Dr. Death movies. He lights a bunch of candleabras and starts up an movie projector. Now, while it is one of my number one dreams in life to watch a movie on a projector with Peter Cushing and Vincent Price by candlelight, Cushing's intent here is nefarious. You can tell by his shifty eyes. He leaves the room and Paul begins to fall asleep/become hypnotized. But the film runs out so Paul gets up to see his cruise ship stalker in Herbert's yard. In a scene shortly hereafter, she takes a rake to the neck, another killing we are told mirrors that in a Dr. Death feature. We aren't privvy to the killer's identity. Could it be Paul? Don't forget about Mr. Shifty Eyes Herbert back at the house either. Okay, so there's that.

Then Paul wanders down into Herbert's basement where he finds Faye, an old costar from the Dr. Death movies. Faye is all sorts of crazy, she eludes to a life full of cheap thrills cut short by a fiery car accident that left her disfigured and cultivating tarantulas in Herbert's basement while wearing a pretty awesome red wig streaked with white. If I ever wind up bald, I'm totally getting a wig just like Faye's. The next morning, Paul nonchalantly asks Herbert, "Why didn't you tell me about Faye?" And Herbert nonchalantly replies, "I didn't want to upset you." The next time I stay at someone's house and they don't tell me they have an aging burned beyond recognition actress raising large spiders in their basement and I discover it on my own, I'll try not to be upset.

After this, there's a few grisly murders (possibly being perpetrated by Paul) involving the actress set to play alongside Tombs on the Dr. Death series, the director for the show is crushed by a mechanical bed, and the pretty PR girl Julia is murdered sort of ala Tombs fiance from back in the day, which of course, consequently leads Paul off the deep end. Cue the fire and the melodramatic suicide speech. There's also another party scene where Cushing does his best vampire mime impersonation and everyone's dressed like it's Halloween, but it isn't, or at least I didn't catch the mention of the date or anything. I have no problems with this however, as I would love to host parties year-round that involved Peter Cushing as vampire-mime, Vincent Price as Vincent Price, and a host of other characters bedecked in vintage looking Halloween masks as I showed footage of my latest horror epic.

I won't give the ending away completely because that's not how I roll. But I will say Madhouse did sort of kick ass. It wasn't as kick ass as Theatre of Blood, another life imitating art Vinnie movie, and the better of the two life-imitating-art Vinnie movies (are there any others? can't think of any off the top of my head). It's not particularly gory, but it does have some amazing 70's interiors and some great scenery chewing by Price. Cushing's house and basement are just how I would think Cushing would actually live. As I mentioned before, this is about the closest I'll get to watching a movie by candlelight with Cushing and Price. As an aside, I used to have this candelabra at my grandma's house growing up and I would walk around with it with all the candles lit and descend her basement steps look for something, anything spooky. I don't know where I got that image at such a young age, I'm talking like 7 or 8 years old, I must've just been born spooky. The whole aesthetic of the walking around with a lit candelabra has always appealed to me so I always get a kick out of it when I see characters in movies do it now. Anyway. Watch Madhouse. Watch Theatre of Blood. They're both kinda meta for Vinnie, I think.
Posted by Jenn at 11:26 AM