The Touch of Her Flesh Part 2 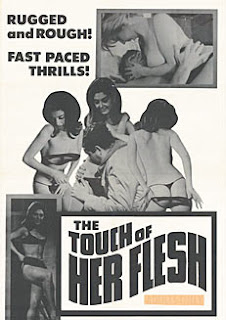 So let's begin where we left off last time, with some lovely young ladies masturbating with clothing. Richard then tells us (his words again) that women trap men in 'sexual vortexes' so he's going to kill 'em all 'so those gates of flesh shall never again reopen.' I absolutely love the language in the voiceover. Richard is so serious.
Cut to a swingin' nightclub where a lovely light-skinned black girl is shakin' it for us to some groovy tunes. Then she retires to her dressing room and takes off her clothes to change into even skimpier clothes. She receives some flowers and then returns to the dance floor to get nekkid again. Unfortunately, she's attracted the attention of Stanley and he drugs her (via the flowers, I'm assuming, remember, numerous substances were abused during the viewing of this picture) and she, we can also assume, dies.
Then a quick weird cut and we're following a chick in a super cute jacket and updo walking through the woods. We find out this is Janet, Claudia's friend. Janet joins Claudia at her hideout, remember, she's hiding from Richard, the husband that she spurned, and Janet and Claudia take off their clothes, but not before Claudia plays a mournful tune on the piano. Janet assures Claudia Richard won't find her and then they rub around on each other.
Cut to a burlesque joint. There are some beautiful sexy dancing ladies in this movie! And of course, grouchy old serious Richard wants nothing to do with any of this sexyness. This scene features a raven-haired beauty on a backdrop of leopard print dancing it up. She's absolutely stunning and the embodiment of sex. So of course she must die. Creative as always, Richard takes her out while she's on stage with a poisoned mouth dart shot out of a piece of bamboo. He then picks up a prostitute that knows Janet and threatens her with an ornately handled knife. If she tells him where Janet and Claudia are, he won't hurt her. She tells him and he stabs her any way.
Here's where the film definitely takes on the 'roughie' vibe. Yeah, there were a couple of deaths of pretty ladies, but up until the pro, Richard doesn't ever use his hands on them, he either drugs them or uses the antiquated yet effective method of mouth dart as described above. The movie just seemed like sleaze before, but when Richard hunts down Janet and Claudia, he gets hands-on. He roughs up Claudia bad, hits her, rubs her breasts, sexually abuses her, threatens to kill her with a circular saw, calls her any number of names, which basically goes on way too long until he finally kills her. Janet, in the meantime, has been listening to this violence perpetrated on her friend and takes off running when she knows Richard is done and coming for her. He's somehow procured a crossbow and chases the panty-clad Janet for quite some time through the abandoned building serving as their hideout until Janet somehow gets the crossbow away from Richard and crossbows him. (She doesn't kill him though, I know you're all super attached to Richard by now so don't get upset; he comes back for two more sequels like a good vengeful killer.) And scene.
Like I mentioned before, Touch of Her Flesh is a wild ride. It's sexy, sleazy, rough, and daring. If you like boobs, vintage lingerie, 'real' women, and obnoxious music that works within its context, this is the picture for you. The women in this movie are gorgeous and they have curves and real tits, too. It's interesting to watch a movie like this from over forty years ago and see how what we regard as beautiful has changed. The curvaceous Janet, for example, would likely be considered 'fat' by today's standards, but here, she's a popular model.
Last night I watched The Curse of Her Flesh, the second installment in the Findlay FLESH trilogy, but I was reeeeeeeaaaalllly tired and my notes are incomprehensible and only half a page long. I must mention the opening credit sequence, however, because I think I enjoyed it almost as much as the credits on naked asses and boobs from the first installment. A guy is at a seedy club and he goes to the nasty bathroom to take a leak. Alongside the 'call Angela for a good time' messages posted in the urinal, the credits appear written in crude magic marker. Brilliant! There's also an excellent stripper in the beginning doing a great chair dance. So I might have to watch this one again, because I know there are some treats in there. Oh, I do remember another great scene with Richard, a dancer, and a calico cat and the dialogue is just hilarious double entendre. Stay tuned!
Posted by Jenn at 11:17 AM