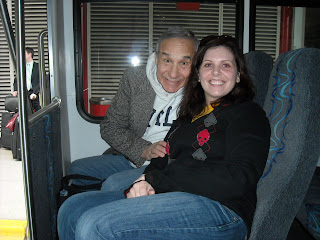 Here's a pic of Rachel with Lloyd Kaufman. Both of us are HUGE Troma fans from way back, so when he got on the hotel shuttle at the airport with us and proceeded to make dirty puns the entire way to the hotel, we were utterly delighted. He kinda reminded me of this guy at my gym who always comes over while I'm on the treadmill to gawk at my tattoos and tell me I have pretty teeth for someone who has mutilated their body. He does this in the nicest way possible though, so I'm not really offended. And he does it every day now, so I guess I'm used to it.
Other than that, the con was a hit, the Italians were so cute and sweet and Lamberto Bava had trouble making change when we gave them a twenty for some merch. And HG Lewis made us sing the theme song from 2000 Maniacs along with him. And Bill Moseley talked about how great Rob Zombie is. Ha, as if we didn't already know. I mean, Tony Timpone asked him to talk more about Rob Zombie after his time was up. Yeah, we don't care about Repo! or TCM or anything else Bill Mosely's done, we care about Rob! Yes, I'll go see H2 and yes, I love Rob Zombie and wish he was my husband, but let the man talk about his career, not someone elses.
Anyway, John Russo and George Kosana (both from NOTLD) bickered back and forth like a old married couple when we stopped by their booth and John Russo was the second dirty old man of the trip when he regaled us with a joke about a Chinese man and a Greek.
We also got to see Vinyan, which I was super stoked about, because I really liked Calvaire, by the same director, Fabrice du Welz. While not your typical 'con' movie (the last movie I saw at a con was Demoni 2 and it was at midnight and people were freaking out and drunk and saying shit to the screen and laughing, and basically have a great time with all the violence, gore, and cheez), Vinyan was a subdued, slow-moving descent into madness flick with a disturbing ending to say the least. And it's been in my netflix for months in the 'saved' section, so I'm glad I got to witness it before it is actually released on DVD here. I would have been more stoked to see Let the Right One In, but that comes out tomorrow and Christian has a bootleg, so I'll get to that soon anyways.
Rachey spent a shit-ton of money on artwork and I got an original New Year's Evil poster. We drank lots of vodka sodas and Stellas at hotel prices and met some really cool people, filmmakers, and artists,  and all around had a great time and didn't think about work once. If only every weekend could be so cool. I missed my fur children but there was only one vomit when I got home after our flight was delayed for five hours. So I think we'll probably drive to Cinema Wasteland.
Posted by Jenn at 4:54 PM