Virgin Among the Living Dead 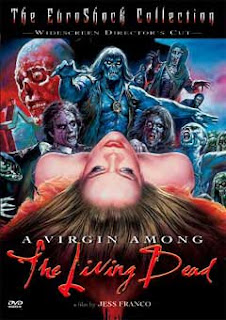 After watching Virgin Among the Living Dead last night, I did an IMDB search on Mr. Franco. He has almost two hundred directorial credits to his name, not to mention his acting or writing credits. And he's still directing movies, although he's damn near eighty years old. I said to Christian, 'you know Jess Franco is still directing movies and he's damn near eighty?.' And Christian's like, 'yeah, he probably has someone take care of him and cook his food so he can make another movie.' And I said, 'okay, yeah, somebody feed Jess Franco, he's makin' another film.' Didn't make much sense, sorta like a Franco movie, so while Christian wasn't alluding to sex or horror, it was kinda appropriate. And it made me laugh. Or me making fun of his comment made me laugh harder. And we had just watched School Killer, a terrible 2001 film in which a bunch of kids go hang out in an abandoned school and there's some ghosts and mention of astral projection and some other crap. And Paul Naschy is in it, unfortunately for Paul Naschy, who just needed to get paid or was related to someone who wrote the movie or both. So I needed a laugh.

The first Franco movie I saw, or at least the first one where I was aware that hey, this is a movie directed by some dude named Jess Franco and he has a cult following and I should pay attention since I like weird film, was Killer Barbys. Not exactly a great example of a 'good' Franco film. Rachel bought it at Suncoast in the mall and we watched it and we were like, wow, that sucked. So now it's like twelve years later, and I'm sure I've seen Franco films since then, but never really gave them the super attention I've lauded on the Bavas, Fulci, even, although recently, Joe D'Amato. So Virgin Among the Living Dead found it's way into my DVD player. It unfolds thusly.

Christina arrives at an inn on her way home from school in London to hear her recently deceased father's will. The innkeepress tells her no one lives in the castle where she claims her family resides. The innkeepress maintains her position and Basilio (played by Franco), a servant to the family who acts like his tongue is cut, arrives to take her onward to the castle. Upon arriving, she meets her aunt and uncle, and a sultry cousin (?), Carmenze. Christina acts like she's never met these folks before and then goes to her stepmom Hermina's room just as Hermina expires. The aunt and uncle then prop Hermina up in the parlor while the uncle plays a piano that sounds more like an electric organ and Carmenze paints her toenails. Christina doesn't seem the least bit effected by this and retires to her room, where she is seemingly more affected by a vase of flowers shaped like a severed human head, which I would love to have in my house. Then she falls asleep and we are treated to footage of her sleeping, the first in many sequences where we are treated to a nakey Christina sleeping.

The whole thing is basically Christina ascending a staircase, Christina sleeping naked, Christina waking up from some nightmare, real or imagined, and some other weirdness abounding. It sorta has a D'Amato Emanuelle movie feel to it, but less sexy and more dreamlike. Anyway, Christina is just waiting on the lawyer and she decides to take a skinny dip in a foul pond covered by lily pads. Two old dudes salivate over her but run away and another young guy shows up to walk her back to the castle. They happen upon an abandoned church where another old weirdo tells them of a curse. The young guy walks Christina back home but the uncle yells at him until he runs away and then slaps the shit outta Christina. She runs into her room but someone has put freeze-dried bats all over her bed so she goes to Carmenze's room, where Carmenze is naked and cutting a blind girl with scissors and drinking her blood. She invites Christina to partake in this activity but Christina declines.

Christina is seated at a dinner table spearing a large fish with a fork. She then gazes out of the window and an otherworldly voice calls her name. She then goes back to bed. Cue the otherworldly voice again and Christina gets up and runs around the garden, watched by a lovely brunette who gives slow, ethereal chase. We met the brunette once before, when Hermina was dying. Christina walked past this woman on the way to Hermina's bedroom. All we know of her thus far is that she is quite gorgeous and thin and likes to draw crosses on paper with ink that may or may not be blood. We find out later that this brunette is, well, yeah, the Queen of Darkness.

So it's the next morn (sorry, I'm taking it there wasn't someone in charge of continuity in the script) and Chris finds her daddy hanging from a tree. Then I think it's around here somewheres that the aunt reveals she's the one who killed Hermina and then Christina goes back to sleep and is awakened by Carmenze. Then the lawyer shows up, he's one of the pervs watching Christina skinny dip, and reads some boring crap about who will contest the will, blah, blah, and then Carmenze drunkenly rolls around on the floor and advances on Basilio. Then Christina ascends the stairs again and take a nude nap and wakes up only to be startled by a large black dildo complete with balls in her room. She breaks the dildo, not like that, you perverts, she throws it across the room because it apparently upsets her, and the blind woman warns her to leave. Then Basilio kills the blind woman by strangling her and Christina sees her dad again in the dining room but he still has his noose on and still talks in that otherworldly voice. He tells her of a curse and then she sleeps some more and then she's laid out on the floor with some candles and the Queen of Darkness mounts her (of course, they are both nekkid) and then she wakes up again and she's back at the inn suffering from delusions. Then the Q of D leads her to the lily pond to 'baptize' her, I guess, and fulfill some sort of destiny. Then everybody else gets in the pond and FIN. It actually does say FIN when the movies ends, and I love it when this happens.

Sorry, didn't mean to give away the 'she wakes up and it's all a dream' ending, but you saw where it was going. It's hard to say what I think about this, since I am sort of uninitiated to Jesus' films. I liked it on the level of hey, I like trashy, campy films from the seventies. But there's bound to be better ones out there. I've lined up Venus in Furs and Vampyros Lesbos, the seminals .I do love the absurdity, especially when I get to describing it, it just rambles on and actually sounds a bit more disjointed and weirder than it is. Such is the nature of many of the flicks I watch, I suppose. I want to make some shrewd observation about women, staircase ascension, religious iconongraphy and the nature of dreams but I have little to go on at this point. The man was (is, if you adhere to Christian's attestment of someone caring for him and providing craft services to allow him to keep making movies) prolific, so I'm certain to come up with some sort of synthesis as I get a few more of these under my belt.
Also, I must note the interiors and exteriors are exquisite - candelabras and giant vases and the aforementioned severed human head vase. The furniture is ornate and the woodwork resplendent, but I was a tad disappointed with the fashion. I love a seventies movie with seventies fashion, but given that the ladies in this movie don't really wear outfits all that much, I guess I excuse the lack of fabulous groovy fashion (like in an Emanuelle movie). The castle and it's grounds work well for the story, such as it is, and the film does wind up looking more expensive that it probably actually was. Oh, and this has nothing to do with setting, but it is noted that Jean Rollin directed one of the dream sequences. More on Rollin after I get thru some more of Franco.
Posted by Jenn at 9:01 AM