Yes, this exists. Yes, unfortunately there's no sound. But seriously, watch and marvel as Vampira vamps it up in her usual sexy way while the gayest man ever wears a jester suit. No foolin', I couldn't have made this up!

More loveliness to come and adventures to regale you with the tales of - namely I saw DANZIG last night, got everyone at work to start howling, and started a poll as to whether you would be a werewolf or a vampire. Personally, I'd rather be a werewolf. Oooowwlllllll!

What freaked you out as a kid and still freaks you out?

So Scary Manilow and I were discussing video box art that freaked us out as kids. His was WATCH ME WHILE I KILL and my seminole freak out was 2000 MANIACS. Oh, the blood! I decided, after much wine with my gay, that that would make a nice blog post. What do you guys think? What was the worst video box art for you? What freaked you out the most? What unspeakable things laid in that VHS tape that got your pulse racing? Did you ever watch the movie? Were you disappointed? Did it live up to it's expectations? Sorry, I teach school - I have to ask constant questions. This was the one that did it for me - 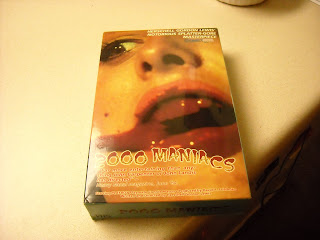 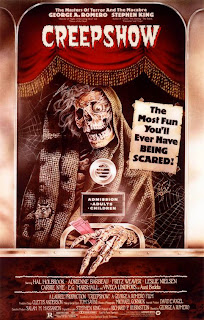 Side Note: I wrote this months ago for a post I was going to do on Father's Day, but then it fell to the wayside. So I present it here now, in its unedited form for your perusal. I hope you find it entertaining, useful, and , at least, comment worthy.

CREEPSHOW is a great movie. There's no denying it. And I know I'm preaching to the choir when I tell you all this. But let's just break it down real quick anyway. It's horror, it's comedy, and it blends the two perfectly, something not all movies that strive to do this can actually pull off. It's got a great cast, including two comedic actors (Ted Danson and Leslie Nielsen) in rare form, a disco dancing Ed Harris, and severed head father's day cake, Adrienne Barbeau, an Artic gorilla, and zombies and roaches galore. Although I could take or leave (more likely leave) Stephen King's performance as the cursed Jordy Verill, the rest of the flick is pretty rock solid.

It's fun, it's spooky, it's directed by George Romero, it has great practical effects courtesy of Tom Savini, and it's just a great time. People get what they deserve, Tom Adkins acts all tough and stuff, and we end up laughing and being grossed out simultaneously. But the more I think about it, the more I feel like somebody's trying to tell us something...

At the heart of several segments in CREEPSHOW lies some deep familial issues. The Father's Day segment is probably the most evident of this - being as how it revolves around an arrogant bastard of a father who drives his daughter Bedilia to knock the life out of him with a marble ashtray. She blames it on a fall, gets off scot free, but returns each year to the scene of the crime to swill Jim Beam out of the bottle and loll around on dear old daddy's grave until sitting down with equally bitchy and cold hearted family members for ham.

Told through flashback, we see poor Bedilia constantly berated by her fuckface of a father, as he screams for his father's day cake. 'I want my cake!' is the refrain and Bedilia, always having been a bit unstable, can't stand it any more, especially when he calls her a bitch. I'd kill the fucker too, the way he acts. It's all deliciously over the top (the lighting and camera work help), but in a way, really fucking sad. Here's this wealthy old monied family who can't get along with one another because money has come between them. Just a matter of time before Pops kicks the bucket and the rest of the clan is rolling in loot. And is is just me, or is there a strong sense of some incest going on between Bedilia and her dad? i could swear that's alluded to. That, and the Aunt, she calls Bedilia the 'patriarch'. Weird.

No one likes each other, although some members may have gotten to know each other in the Biblical sense, and it's all about money, money, money. The message here: families are fucked up. Even rich ones. Especially rich ones. And it's entertaining even without mention of the zombie, the severed head cake, and the Ed Harris disco dancing.

Speaking of fucked up though, Jordy Verill is kinda the opposite of Bedial's clan, but fucked up nonetheless. A worn out country bumpkin with a penchant for booze, Stephen King's portrayal of this broke down soul is pretty goofy. But I kinda feel sorry for Jordy; you figure all this self beratement (he repeatedly calls himself a lunkhead) had to have come from somewhere. And of course, it came from dear old dad again, this time, instead of appearing through flashback, appears as a ghostly presence in a mirror doing a darn good Angus Schrimm impression, to chastise Jordy from beyond the grave. And all Jordy wanted to do was sell a meteor the the college to pay off a bank loan. Instead, the meteor turns Jordy into a walking plant. Jordy never asked for this station in life, but I can tell you what, daddy probably had a lot to do with it. Not the meteors and the exuberant plant life, but with Jordy's self esteem issues and probably his alcoholism as well. I know my parents have driven me to drink on more than one occasion.

Yeah, that's right, just blame it on the parents.

Although the daddy issues are more prevelant in the first two segments of the movie, I still think there are some power relationships at play in the TV segment and the Cage segment. Maybe not in the roach segment. And we cannot forget the prologue. I mean come on, after Tom Adkins disciplines his kid (Stephen King's real life kid, Joe Hill, who has come into his own as a horror author in his own right), he tells his hapless wife, 'that's why God made fathers, babe, that's why God made fathers.'

Oh, CREEPSHOW! I love you for so many reasons! Way to get all psychoanalytic on our asses and make us think for once. At least now, after twenty years of me watching you and several degrees later.
Posted by Jenn at 3:25 PM 5 comments: 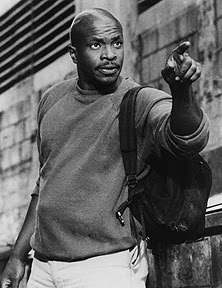 As if I needed to tell you Keith David was in motherfuckin' ROADHOUSE, THE THING, and PITCH BLACK, we primarily know him and love him as a down-on-his-luck construction worker named Frank from the longest fight sequence in a movie EVAR. Go watch THEY LIVE and drink every time Rowdy Roddy Piper says something ridiculous. Do it for Keith. It's his birfday.
Posted by Jenn at 1:59 PM 4 comments: