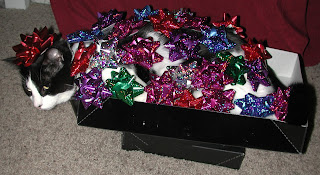 It's been three years since the inception of the Cavalcade! Lots of booze, cats, Naschy, sleaze, horror, tattoos, and cats to come in 2012!
Posted by Jenn at 3:10 PM 6 comments: 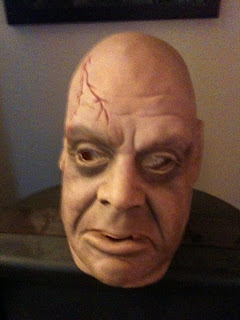 I got a Don Post Tor Johnson mask and a copy of A SERBIAN FILM for my Christmas. We took turns wearing it while eating a giant delicious pasta and then Sam had to go elsewhere during THAT scene in the movie. A good day after Christmas, if I do say so.
Posted by Jenn at 1:52 PM 4 comments:

Merry Fishmas, perverts. We just ordered pizza and started drinking! Take a good look, Sam, because this is the most sober I am going to be for the next forty eight hours or so. We'll be cooking, eating, baking, and drinking long into the night tonight. Hopefully Krampus won't come and take us to Spain. I'd hate to leave the cats on Christmas.

Beyond the Valley of the Apocalypse Donkeys 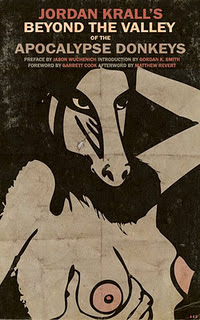 I'm obsessed with Jordan Krall's BEYOND THE VALLEY OF THE APOCALYPSE DONKEYS. Obsessed. I've been a fan of Krall's since I picked up his filthy, sleazy, crazy, pulpy, ode to New Jersey and film noir, SQUID PULP BLUES. I adored his Lovecraftian pornographic love letter, PIECEMEAL JUNE. And the yellow-y Spaghetti western goodness that is FISTFUL OF FEET. I wanna get a dog and name it Fauntleroy 'Little Bing Bong' LeRoux, such is my love for Jordan Krall's work. But before I start drinking his bath water, let me try to put into words why I love these fucking books so much.

BEYOND THE VALLEY OF THE APOCALYPSE DONKEYS is...well, maybe I should talk about what it contains, rather than what it is, specifically. It's got a nudist colony, a giant green hummingbird, a much sought after rare VHS of a strange film, incomplete childhood memories, murder, voyeurism, plenty of violence, a naked donkey-masked woman (and later, women, plural), a washed-up old daredevil, the corruption of marriage, sex, and pancakes, plenty of pancakes, plain and blueberry.

All these things are great alone (come on, pancakes and sex and rare films!?) - put them together in Krall's slummy New Jersey universe and you have fucking gold, my friends. And if you have a thing for boobs, which I know you do, you get plenty of boobs here, too. Bonus.

But it's not all fetishes and weird shit. Although really it is, and then some. There's some real homage going on here and if you possess the same sensibilities, it's easy to see where and what Krall is channeling. But he does it in a way that is solely his own, creating what is not merely homage, but an amalgamation of all the things I love into something completely new and even more bizarre. There's a variety of influences/references - David Lynch, Russ Meyer, Tim Lucas' THROAT SPROCKETS, Tarantino, Hitchcock, melodrama, film noir, John Waters, giallo, old school VHS culture, and SMALL fuckin' WONDER. And to think there's time for donkeys! Or at least, donkey-masked women! If that could be considered an 'at least.'

I haven't given you much to go on really, which I'm okay with. Because I'm half-way through my second reading and I'm still actually trying to still make sense of it all. could say it's part mystery or part love story, but isn't everything? I've ordered the t-shirt and I'm going to wear it while I try to figure out what it is that needs figuring out, or if I don't, that's okay too because I like the getting there. Although I hear Jordan is renouncing this whole noir crime horror writing thing and focusing on foot fetish erotica. I'd still read it and probably not hate it. I'd probably really like it a lot. And it probably wouldn't be too different from his other work. Less squid maybe? 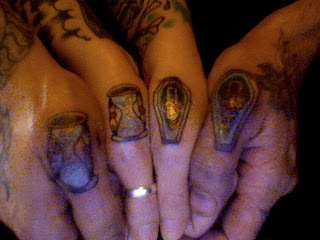 Sam and I got our first matching tattoos (with each other) tonight! Now that's how to celebrate the fucking holiday season, yo!
Posted by Jenn at 8:27 PM 7 comments:

It's an alien! It's a breach birth!