RIP Paul Naschy/Vengeance of the Zombies 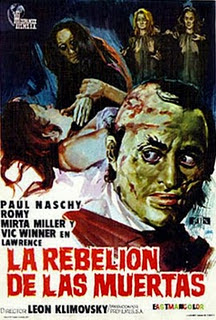 It's been two years to the day since Paul's passing and I'll be cliche and say there isn't really a day that goes by where I don't think of him. He's all over my walls, on my t-shirts, tattooed on my forearm, in my copious DVD and VHS collection, and basically just in my heart all around.

So in honor of the great cinematic force to be reckoned with, the Mighty Molina, I sat down with Leon Klimovsky's (!) VENGEANCE OF THE ZOMBIES (1972) for the fourteenth or so time in order to present my thoughts for you here.

The film opens true horror fashion in a cemetery at night, with the two caretakers, husband and wife August and Flora, arguing over how to procure their living. Seems to be these two are grave-robbers and August wants out of the life but Flora wants one last haul; a wealthy young socialite was just murdered and entombed in their charge and it's rumored she's covered in jewels. August relents and the two enter the crypt.

They don't have to work too hard, as the lid pops right off the coffin and Flora snatches an impressive necklace. The dead girl's ring doesn't come off so easily, but as Flora is about to hack on the finger to gain access, a strange masked man locks the couple in the mausoleum. Outside, this strange figure pours red paint on a wax effigy and lights it aflame. Gloria Irving, the lovely young pilfered socialite, rises from her casket to do evil bidding. She strangles August and clubs Flora over the head with a candle stick and....roll opening credits.

Cut to a very seventies London. A Hindu ritual is taking place with Krishna (who else but Paul Naschy) is officiating a service for a bunch of whiteys. He holds burning ash in his hand and takes on some pretty heavy duty acupuncture with the help of his lovely assistant Kala and converts the glorious redhead Elvira into his fold. Elvira happens to be the cousin of the recently undead Gloria and is struggling greatly with her cousin's death. She finds solace in Krishna (who wouldn't?) but her friend Lawrence, a psychologist, warns her against the charismatic swami because he's probably just trying to get into her pants. (Krishna also keeps a live leopard on his dining table. Yes, please!)

After warning Elvira of Krishna's probable intentions, Lawrence drops Elvira off to some not so sweet dreams. Those dreams become shocking reality (don't they always?) when Gloria comes to visit her cousin, along with her resurrector, the masked assailant, only to hang her dad and give grandpa (the butler?) a hatchet to the face. Elvira's left a shaky mess in her scanty pink nightgown, but not for long, as we cut to dad's funeral in the next scene.

Lawrence decides he wants Elvira to take a vay-cay, and she decides to go see Krishna at the evil country home he's recently acquired. Seems the family that lived there before was into all sorts of hoodoo and black magic and the villagers revolted and killed them all. You know, there's no kinda justice like angry mob villager justice. Elvira's non-plussed when she learns this information from a creepy train station master, and is even more so not put off in the slightest when a strange scarred up fat black man, T. Zachary, comes to take her to Krishna. Weird. But good weird.

When Elvira arrives to Casa de Evil Black Magic house, Krishna is bedecked in white, spouting cliches with an unrivaled-anywhere intensity, having tea, and ordering the servants around. He doesn't even stand up to invite Elvira into the room. He's kind of an ass, but he can be, so it's alright. He immediately suggests Elvira retire and she does so, to the weirdest dream EVAR and easily the most bizarre and enjoyable scene in the movie.

Paul plays the devil, Kala's all painted in gold, stirring a cauldron with a giant bone, all the servants are zombies. Free form jazz plays maniacally (and it will throughout the rest of the movie in a very interesting choice in score), and Devil Paul kisses Elvira, slits her throat, drains it into a golden chalice, natch, and drinks freely from it. Everyone leers and Elvira wakes up screaming. Krishna comforts her and Kala looks on, jealous. Don't be jealous Kala! There's enough Paul to go around for all you ladies!

So all this is going on and that masked voodoo killer dude is still out there all over the place, whacking more socialites (in one turn, a very compliant strangulation), burning more effigies, and making more undead chicks for his nefarious purposes. There's even a scene with a sandwich-eating mortician (they are always eating!) getting stabbed in the neck with a beer can (Amstel Light!), much to my delight. Scotland Yard is confounded but intent on catching this creepy killer and Lawrence is called in for the assist.

Things get more bizarre with the decapitation of Krishna's old crone housekeeper, a pitchfork/sickle fight between Krishna and T. Zachary, some back to back sexy times with Kala first, and then Elvira, Elvira professing her love to Krishna (as if we didn't see that coming), the station master forced via hoodoo to slit his own throat, the revelation of the masked killer's identity, some serious BLOOD FEAST imagery, and a weird deux ex machina, all not necessarily in this order. It's enough to rival any horror flick, stateside or otherwise, and I LOVE IT.

Described in Paul's memoirs as a 'nightmare within a nightmare' and 'a highly enjoyable zombie film, a strange, esoteric blend of Devil worship and ancient voodoo rituals leading to the resurrection of terrifying female zombies,' I think a far more academic mind could do a hell of a lot more than I have just recounting the events here. Naschy gives a remarkable triple threat performance as Krishna, the masked killer (sorry, spoiler) and the goat-ish Devil and there are enough weird camera angles and slow motion to really give you the sense that you are indeed within Elvira's nightmare.

There are moments that are seemingly WTF, not in a good way, but those WTF good way moments outweigh the bad ones and the anecdotes involving real-life practitioners of the black arts finding hidden meanings in this work and seeking Paul out to discuss these ideas elevate it to cult. It's a great horror movie. The killings are gruesome, the ladies are gorgeous, and it never gets boring.

I urge you to have yourself a Naschy-a-thon today (or any day, really) and check out the Naschy blog-a-thon posts from last year put together by the Vicar and the Duke over at Mad Mad Mad Mad Movies. What an amazing time that was!

Thank you, Paul, for your awesome and awe-inspiring body of work in the genre I call my own! *Tear*
Posted by Jenn at 9:27 AM 7 comments:

Attack of the Hand

My hand. On Deniro's head/face!

I can't keep October out of the leftovers (the cats have had more turkey than I have) and I've already taken two naps but the wine is still flowing and a weirdo foreign Christmas movie brought to us by Rene Cardona (!) is being watched. I might just tote out the turkey monster classic BLOOD FREAK for a little more strange movie fun after dessert (when Sam wakes up from his second nap). Hope you guys are eating lots, drinking more, and having a lazy drunken day of movie marathons. Happy Fangs-giving, y'all.
Posted by Jenn at 3:45 PM 6 comments: 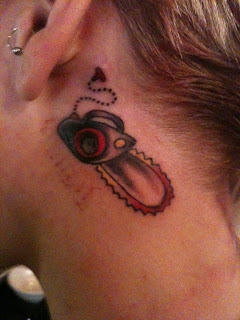 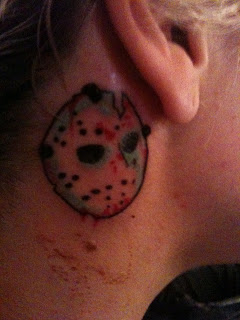 Photos were taken maybe an hour or so after I got them done, so they are kinda gross, but whatever. These are horror tattoos and this is a horror blog so you guys will be fine with a little blood, tattooed on or coming from me. Now I finally have a tribute to the slasher side of my fan-dom. On my neck. Knuckles (possibly) up next.
Posted by Jenn at 5:47 PM 17 comments:

We saw The Misfits last night! So fun. Yes, they've been more brand than band for the last decade or so and Jerry should probably hang up the devil lock for good, but I don't care! I rocked it out! AND I wore a Misfits sweatshirt to the show. I'm in my thirties and I can be that guy if I want to. Punk rock show, drinking beer, hanging out with Sam. Last night could be a contender for THE BEST NIGHT OF MY LIFE, of which I have many.
Posted by Jenn at 11:06 AM 6 comments: