Happy Anniversary to ME!

It's that time again, blog birfday/anniversary time! The Cavalcade turns two today! Another year of blogging and friends and weirdness and good stuff all around. I hate (New Year's) Resolutions (I resolve to remain AWESOME), but hopefully I'll have some good stuff in store for year number three and vow to keep it weird and wonderful, as always.

Let's recap. Some filmic highlights from last year include:

1. A summer of decent horror on the big screen. I love going to the movies and we went a LOT over the summer. I'm not saying THE EXORCISM OF EMILY ROSE or PREDATORS are on my next top ten list, but they kept us in our seats and we weren't bored.

2. Seeing SILENT NIGHT, DEADLY NIGHT on a big screen, with an audience, MST style. Very cool, indeed, although there was one guy in the audience that didn't get it, and told the guys with the microphones to 'shut the FUCK UP! I'm trying to watch the FUCKING movie!' There was some shuffling and then he was expelled from the theatre. This was almost as entertaining as the jokes.

3. Crispin Glover on tour with his film, WHAT IS IT? A surreal experience and one I've wanted to experience for a decade. Crispin came to Richmond, read from some of his found object books and screened the film. Freakin' fantastic.

4. The Paul Naschy blog-a-thon. Such an excellent outpouring of all things Naschy from all over the blog-i-verse. I had no idea so many people loved Paul. It brings tears to the eyes.

5. Snow days, last January and this December, and plenty of movie marathons as a result.

I'm sure there's more, but I've only been awake twenty minutes and only had one coffee, so if I think of anything else, I'll let you know :) Here's to another great year and hoping everyone's holidays are going well. Almost over! Then we can put away the black tree and the rat nativity and go back to being miserable for some other reason ;P 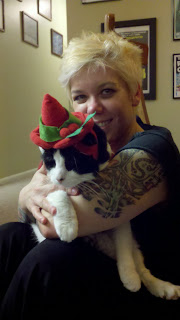 And Merry Fishmus from all of us at the Cavalcade! On behalf of me, Moochie, Tuna, Bela, October, Deniro, Soap Sud, and Sam, we all wish you a great holiday with much wine and many horror movie marathons! Eat lots and drink more, and remember, it's not Xmas unless the tree falls on top of someone, preferably your grandma. Push that shit over if you have to. I love you guys and will see you next week!
Posted by Jenn at 12:24 AM 10 comments:

Romans and countrypeople, lend me your Bigfoot-loving ears! My pal J. Astro, formally of the Cheap Bin, and now the proprietor of the store front known as Screen Grab, is spearheading a blog-a-thon on the almighty Yeti. And, as added incentive, as if multiple posts about all sorts of 'squatch related cinematic atrocities didn't get you goin', I may have a bit of a role in this mayhem. So check it out and tell Astro I sent ya.
Posted by Jenn at 2:04 AM 2 comments: 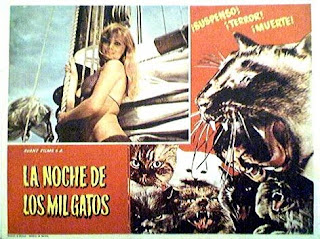 It's no secret I love cats. And it's no secret I love horror movies. Hell, I even love Hugo Stiglitz just a little bit. He's like a one-note low-rent Mexican Paul Naschy, and he still gets the hot chicks. And he looks bad ass in big sunglasses. So if this one of those Venn diagram thingies, I would, by default, have to love the 1972 Rene Cardona, Jr. flick, NIGHT OF 1000 CATS. And I'm in luck, because I do!

Simple premise as far as out-there movies go. Mysteriously wealthy, monastery-inheriting, psychopathic playboy (Stiglitz) flies around all day in his helicopter peeping on beautiful women in their backyards in order to lure them back to his crumbling compound for sexy times, horseback riding, water skiing, swimming, and murder most foul. The purpose of murdering these lovelies is two-fold - one - Hugo is quite the collector (a trait, he explains, spans generations in his family) and he needs their heads for his collection. Second, ever the collector, he also has about a thousand felines, give or take, who enjoy eating human meat. And those cats are hungry. Hugo gets his (in more ways than one) and the cats get to eat. Win, win.

Things get going right away with the introduction of the lovely Krista, a blond Hugo has been wining and dining. Hugo woos her back round to his to meet Dorgo, his Tor Johnson-like assistant and groundskeeper of the monastery and show us his 'collection.' After a strange dinner of Dorgo's special 'meat' - Krista is led to the room where the jars are kept. He kisses her, assures her, 'don't worry, they're made of wax', and then brutally strangles her. He then dons a bathrobe, grinds her body up, feeds it to the cats, tastes a little himself, and calls it a day.

With Krista a permanent fixture in the collection, Hugo begins courting a young mother, Cathy. He flits around in his copter all day, dropping dolls from parachutes out of the whirlybird for Cathy's little girl and basically winning her over this way. Cathy's married, but her husband is out of town on business frequently, so she gives into Hugo's advances. Cathy and Hugo engage is some sex in the taxidermy room - 'he enjoyed stuffing them more than killing them!' Prophetic, non? (Oh, I wish I had a monastery I could outfit with a taxidermy room!) Then Hugo decides to show Cathy his collection. The couple is interrupted by a knock on the door. A doctor has broken down on his way to see a patient, can he use the phone? Cathy's gotta go anyway, and so Hugo is forced to make do with the doctor for his collection.

Now, I have an army of cats and I know how they can be, especially during feeding times. Sometimes you just have to take what's available or they will get out of control. I know Hugo would personally rather dispatch of Cathy because something about the combination of sex and killing is appealing, but in this case, I guess it's not entirely about Hugo. And it's not all for naught, because Dorgo gets to keep the doctor's stethoscope to play with.

Hugo decides to forget about Cathy for a few moments, and focus on some other women. Seriously, this dude has so many chicks lined up, it's unreal. They appear in such numbers and are such non-actresses in many occasions, it's often hard to keep up. It makes the head hurt. But if you really want something to make your head hurt, how about the editing of the scene where Hugo remembers his first piece of his collection?

He begins by stroking his polar bear (an actual stuffed polar bear in the taxidermy room, pervs) and gazing longingly at a particular head in a jar. Flashback to a horse and buggy ride and some skeet shooting with another blond. Hugo likes this one and warns Dorgo away from her. He's going to give her a ring that has been in his family for centuries. We get to see this twice. The polar bear petting, the longing gaze, the horse and buggy, the skeet, the everything. And this movie is only an hour and five minutes long! It just adds to the fun for me. Sam got up after that and went to make tea.

The flashback ends badly, obviously, with Dorgo frightening the girl and as she runs away in painful slow-motion with plenty of up-skirt shots, Dorgo ends up spearing her with a giant pair of garden shears. What's a heartbroken young lover like Hugo to do? Why, put her head in a pickling jar and begin murdering other beauties, all in the name of misbegotten love, I'm assuming.

Still worried about Cathy, the one that got away, Hugo is plagued with nightmares of Cathy's little girl sleeping and cats creeping around in the night. He drowns his sorrows with a shapely brunette and when he's about to ask her back to the monastery, she gets a call from her sugar daddy and has to run.

Those cats ain't going to feed themselves. so Hugo challenges Dorgo to a chess game and when Dorgo gets check mate, into the cat pit he goes. It's a shame really, because Dorgo seems to be having a lot of fun and I was sorry to see him go. But even a deadpan killing of a loyal servant doesn't sate our anti-hero and he's still having headaches about Cathy. To kills his sorrow, he tries harpooning a scantily clad young thing, but then winds up drowning her after a quick jungle chase.

I must interject here that Hugo doesn't really seem to enjoy the killing so much. He is so stoic in all his actions, it's hard to tell if he's enjoying it, doing it out of some sort of compulsion, or merely as a way a life. And where the fuck did he get all those cats? And how will he care for them all since he killed Dorgo? Also, he doesn't particularly fear getting caught either. He's persistent and creepy, flying that helicopter all over town, spying on women as they exit their showers and creepily rubbing his beard. It's all very unsettling.

Cathy decides to give him another shot and goes back to the monastery. Hugo insists on showing her the collection again and upon seeing it, she's not very impressed, and smashes a large brandy snifter into Hugo's handsome face. Then she grabs a spear in an attempt to kill her would-be captor, but the cats begin to escape! Sensing Hugo's facial wound, they attack in a swarm, in a scene straight out of a Hoarders episode from Hell. The cats keep a'comin', but Cathy has enough time to reach her car and escape!

Pan back inside where there's one empty jar. For Hugo! Or perhaps.....for you! The End.

I love this fucking movie. I have the tshirt and the poster and the clamshell VHS copy. I watch it five to six times a year and it never gets old. It's ludicrous enough to elicit laughter, yet everyone plays it stalk straight, with perhaps the exception of Dorgo. Hugo Stiglitz is even kinda sexy, although I wouldn't be climbing aboard his helicopter any time soon. It's from the seventies, has cats, and not really all that much violence towards cats, which is something I'm usually worried about in my horror watching and otherwise, especially in a movie called NIGHT OF 1000 CATS. You have to figure one or two gets the hook. I do kinda worry about them at the end, though. With Hugo and Dorgo dead, how are they going to get their dead person meat?

At one hour and five minutes, it ain't gonna waste too much of your precious time and it's silly enough to make your head hurt. I like that in movie. Make my frontal lobes ache, movie! And be from the seventies! And feature cats! That is all.
Posted by Jenn at 2:44 PM 5 comments: