Hideout in the Sun 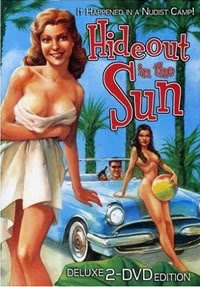 Ah, the nudie cutie picture. You gotta call the nudie cutie a 'picture' as opposed to a movie because that's what movies were back in those days, pictures. It just sounds better that way. Hideout in the Sun (1960) is Cavalcade favorite Doris Wishman's first picture. For those Wishman-uninitiated, she's one of the most prolific female directors in history (female directors still being somewhat of an anomaly) and popularized nudist movies, as well as made roughies, horror movies, and all manner of sexploitation films in a career spanning almost four decades. Although some refer to her as the female Ed Wood, I love her, but I love Ed Wood too, so there.
You would think that a nudie cutie would necessarily have to have a plot. Well, this one is a bit smarter, I suppose, and it does - it concerns brothers Steve and Duke, two bank robbers, who have just hit a joint for a hundred grand. Duke, the ringleader of the pair and a bit Bela Lugosi looking, does the actual stealing, while Steve reluctantly drives the getaway car. After the heist (while this movie does take place in '60, Duke speaks likes he's strait outta of a 40's noir picture - it's all 'heist', 'double cross', 'dame', 'curtains' and he's the only one that talks like this), the brothers head to the marina to catch a boat to Cuba. Rodriguez, the boat captain, doesn't like the heat the recent robbery has brought (the brothers' deeds are all over the news), and decides not to disembark for Cuba yet, telling them to come back in a little while.
The brothers go to a shopping center and highjack Dorothy and her car as the lovely redhead is leaving a dress shop. Duke demands she take them to her destination where they can lie low until their boat can leave. Dorothy explains she's on the way to the Hibiscus Country Club, and Duke thinks this'll be the perfect spot to hide out. Upon arriving however, they realize the Hibiscus is a nudist camp, and Duke couldn't be more pissed, as is his way. He threatens Dorothy with violence and chain smokes and Steve decides When in Rome and joins the nekkid revelers in the pool, well, wearing a towel.
Steve's liking what he sees, and remarks how healthy and happy all the nudists look. And indeed they do. Nudists have a good time, man. They play volleyball, they swim in the pool and sunbathe, they drink ice cold Coca-Colas, they just relax. The nudist camp is a a pretty idyllic and easy going place, innocent as it were even despite the nudity, and Steve figures he could get used to this way of life, as well as life with Dorothy. I mean, he's already seen her naked.
But reality check time ensures Steve and Duke must head back off to their boat, which incidentally leaves without them. Duke hits Steve on the head and takes off with the money case, running straight into a Serpentarium (Lord, how I wish there were still such things as Serpentariums - basically a south Florida institution housing all manner of poisonous snakes and reptiles in pastel colored enclosures with a giant fiberglass snake out front - sounds like heaven, doesn't it?), and falling victim to a Cobra bite, which kills him instantly. Steve calls the cops and turns himself in, but not before returning to Hibiscus to tell Dorothy to wait for him, which she agrees to, and SCENE.
I was pleasantly surprised by the complexity of the plot. It's not super complex, don't get me wrong, but I was kinda surprised there was a plot at all. The nudie cutie was commerically viable because it was the only way back in the day you could go to the cinema and see boobs. Mind you, there was no full-frontal, all the nudists conceal their junk with beach balls, towels, flowers, all manner of props, because you couldn't just let your balls or your pubic hair hang all out. But breasts were cool and perverts would undoubtedly go see these flicks to see the boobies. Especially by today's standards, this movie seems as tame as it gets. It's all innocence and suntans and beach volleyball.
But seriously folks, how long can we really watch a bunch of naked people play volleyball and swim in the pool? Not very long. And as much as I loved this movie, the happy-go-lucky nudist parts often dragged. (But it's still a beautiful picture - the retro kitsch factor is unbelievable - something about that South Florida setting in the 60's.) Apparently, as times changed, however, the nudist movie died along with the fact that audiences wanted more hardcore and Wishman would be on hand over the next several decades to deliver. Can't say that I blame them.
This is an excellent starting point for budding Wishman fans, because it's a great slice of early exploitation cinema shot by a lady. And the vintage cheesecake shots are not to be missed. Think naked girlies romping and posing in fountains. It's as sexy as this gets, really. It seems this film was ultimately lost, until Wishman found a pristine copy in her storage room some forty years later. So now it's been given anamorphic treatment and looks fantastic. If you watch one nudie cutie picture this year, please let it be this one. Or you can watch Nude on the Moon, I don't care.
Posted by Jenn at 11:14 AM