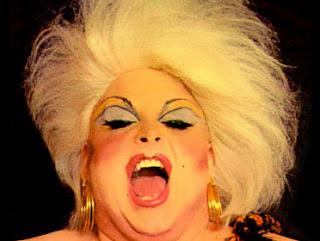 Today marks the passing of the greatest entertainer in the history of the world (and I'm really not being dramatic either), Glenn Harris Milstead, the mighty Divine! It's been 24 years since Divy suffered a heart attack before he was supposed to make his mainstream television debut on MARRIED WITH CHILDREN. The story goes that after he died (in his hotel room where he was waiting to go show), the producers sent a bouquet to his funeral with a card that read, 'If you didn't want to be on the show, you could have just told us.' I think he would have liked that. Long live DIVINE!!!!!!

Now go watch FEMALE TROUBLE. It's my favorite.
Posted by Jenn at 2:37 PM