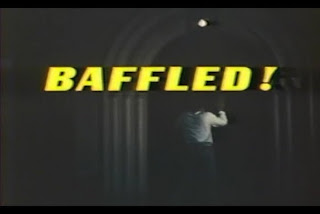 Tell me this doesn't sound like GOLD - Leonard Nimoy stars as international race-car driving playboy with unhinged psychic abilities who subsequently becomes embroiled with a Satanic cult. Over the course of said embroilment, he manages to be involved in a high speed car chase involving a super seventies black van, engage in a psychic staredown with a young daughter of a famous actress who is also involved in the aformentioned Satanic cult, the daughter, not the actress, and beat down an old lady, who really isn't an old lady, but the former BFF of the actress' late husband, who both were members of, you guessed it, the Satanic cult. And there's plenty of slo-mo running AND screaming. Nice.
Now, I love a Scooby Doo ending (almost as much as I love the he woke up and it was all a dream ending) and the thought of Spock in a fistacuffs with a meemaw. The mere thought of this makes me dizzy- and I'm glad to say that BAFFLED! delivers this action in spades. But you have wade through a freakin' hour and thirty six minutes of stupid. But let me back up.
So Tom (Spock) is driving his racing car in a race (go figure) and he suddenly gets a psychic vision of an old manor house, a little girl descending a staircase, and a woman screaming. It's an intense vision, and being that Tom's not used to these sorts of things, he crashes his race car. Then he does what most of us would likely do in the same situation - he goes on national television and blabs about how he's a crazy psychic person.
This interview attracts the attention of a lovely English bird, Michelle, who is also a rare books dealer and specialist in occult sciences, natch. She rings Tom up and manages to convince him in several short minutes to accompany her back to England so they can find the source of his vision and possibly help the screaming woman. You can tell Tom can really care less; Michelle is a looker and a half, and so you know that's why he agrees to fly to a foreign country and go on a caper with this woman.
That being said, I would love to be part of a couple that goes on capers together. I'd wear sexy mod outfits and drive the getaway vintage jaguar, because my man and I, we wouldn't be going on any helping people capers like Tom and Michelle. Oh no, we'd be going on dangerous adventure capers to steal rare jewels. I guess I wouldn't mind being psychic, too. It would aid in the capering, no doubt.
So back to boring old Tom and Michelle. Geez, I'm so bored already. They get to England and go to this manor house from Tom's vision. How they found it, I don't remember. Michelle had a brochure or something for it. Who knows. It's unimportant. The proprietress, Mrs. Faraday, is one of those old bitches you just know has something to hide. She's got that written all over her. But, and this is one of my problems with this movie, is that Tom and Michelle are not idiots, Michelle especially what with her esoteric knowledge of history and the occult, but they act like idiots. Most of the rest of this is them walking around speculating on who does what and why and where and walking into cellars with lit matches and getting stuck in elevator shafts. And REALLY, who cares? Why do they care?
If I had psychic visions, I would keep that shit to myself and use it for EEEVIL. I certainly wouldn't travel to England because my mind's eye saw a woman screaming and I felt the need to help her. Are you kidding me, BAFFLED!? So yeah, Tom and Michelle get stuck in places and open secret doors and try to expose everyone else in the house as poisoners or cult people or something and there's the actress and her daughter, who I mentioned earlier, as well as an Italian butcher, two drug-dealing newlyweds, and a butler named Hopkins.
If I had a butler, I would name him Cinnamon. Just so I could say things like, Cinnamon, please to answer the door. And I'll have my tea in the solarium today at precisely four. That is all for now, thank you, Cinnamon.
I mentioned the ending - which was AWESOME- so basically what you do is this - find a copy of BAFFLED! and just skip right to the ending, watch that a few times, LOL as if your heart depended on it, I did, and then go back to watching internet porn. There, I saved you a BAFFLING hour and a half. Yeah, you waited for it and I went there. But seriously, this thing was boring AND confusing. All the slow motion running set to super sexy swinging sounds doesn't even save this. And Leonard Nimoy was creeping me the fuck out - smiling and leering at Michelle and attempting innuendo. Do. Not. Want.
So, in theory and on paper, this sounds stunning. In real life, not so much. In fact, it took me two days and three hangovers (something about that math isn't right, but whatever) to watch it. But my made-for-tv seventies movies kick continues.
Posted by Jenn at 3:22 PM