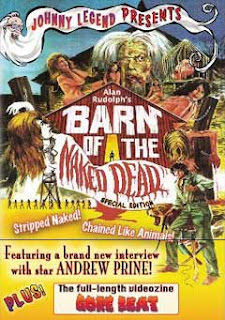 Simone, Loretta, and Sherri are three cute dancers on their way to Las Vegas to meet their agent. Of course, they have to drive through the desert and break down along the way in the middle of freakin' nowhere. After a night spent in their car, Andre comes to the rescue and takes them in his beat up old jeep to his nearby farm. Left to explore while Andre goes to get something within the house, the girls discover a caged cougar and an outbuilding where at least ten young girls are chained to posts in the floor. Before they can even react, Andre adds these three new lovelies to his menagerie and later becomes convinced that Simone is the reincarnation of his dead mother.
That's about all there is to the threadbare plot which grinds to a halt after Simone and company are captured by Andre. Occasionally, the captives are forced into mock circus acts as Andre bull whips them, but the whole circus thing kinda seems forced. It's like, oh here are some cages at the location we found for our movie - let's tie in a circus theme of sorts! I would have like to have seen it used more to Andre's advantage, it could he's a total psycho and thinks women are animals and the actor (Andrew Prine) plays the part with such chilling aplomb it made it almost difficult for this girl to sit through. He's got some amazing lines like, 'I'm your trainer - you obey me and you'll be part of the greatest animal menagerie of history - disobey me and you will SUFFER!' and 'Breeding is important - some of them seem untrainable - it will be my DUTY as ringmaster to train them!'
However, Andre ain't all that in that he never carries a gun, but can apparently overpower three fit young ladies without so much as a struggle. Director Alan Ruldolph (yes, the same Alan Rudolph who directed CHOOSE ME and TROUBLE IN MIND) seems almost embarrassed by scenes like this, and quickly cuts away before the viewer has time to think about what just happened. But this viewer, who has ample time to think about all kinds of stuff, couldn't help being offended by the outright stupidity of the women in this movie.
Certainly, the minimal brutality we are actually treated to in the film isn't enough to break these women's wills so easily. I cannot be forced to buy that these women at some point or another (some having been held captive by Andre for as long as six months) had tried some form of escape. As a weird film aficionado, I guess you could say I'm used to (for lack of a better term) women being depicted as weak, but being depicted as stupid is another thing entirely.
For instance, when Andre becomes convinced that Simone is his dead mother, he unshackles her and then whips the living daylights out of Sherri. Simone idly watches - couldn't she use her new found maternal authority to thwart Andre's attempts to harm her friend? She does have the smarts to play along; however, instead of trying to convince Andre to let the girls go, she more just pumps him for information to carry the plot and action along.
Another instance of women's lack of intellect here is when one girl who has become useless to Andre for whatever reason is 'set free.' Before letting her go, Andre makes her don a yellow smock which he smears with cow's blood. He gives her a running start and then releases the wild cougar he keeps in a cage for this express purpose to hunt her down. How can she be so naive? The cougar is right there! She could just take the blood-soaked shirt off! But no, she runs out into the desert and of course, gets killed.
Oh, and there's some HILLS HAVE EYES-ish back story (even though this film was made in 1973 and HHE was made in 1977, but you get it) involving some nuclear testing in the area. Andre's dad has been deformed and mutilated by atomic radiation and stalks the farm, occasionally getting his burned hands on a fleeing victim or two. But this whole things seems stilted and arbitrary (a jab at the Man? At the Establishment, maybe?) and meaninglessly tacked on to the end of the film as some sort of plot device (?).
The film was in part modeled after the case of Robert Hansen of Anchorage, Alaska. Between 1977 and 1981, Hansen tortured and sexually abused seventeen women. What was most chilling about his crimes was that he would release the women naked into the countryside, give them a head start, and then track them down with a high-powered hunting rifle. He was eventually caught and received life imprisonment.
It's all grisly enough and weird, but not in a wonderful way like a movie called BARN OF THE NAKED DEAD should be. Prine as Andre is the true star here, chewing scenery all over the place and generally being as menacing as possible. He's a charismatic psycho and charming, if not completely off his rocker. Andre and his creepy dialogue are the one thing keeps this from settling right into an utter waste. The film can be found under the alternate title TERROR CIRCUS.
Posted by Jenn at 4:54 PM