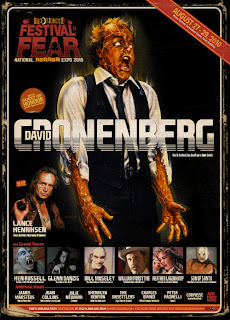 So this year's Rue Morgue Fear of Fear's guest of honor is David motherfuckin' Cronenberg! You know I'm getting my tickets the second they go on sale. (AND, as a wonderful, I couldn't have planned it any better incentive to go to Toronto at the end of August, The Specials are playing two shows while we'll be there. Got my tickets for that shit already, ya know it.) Lance Henricksen's gonna be there and Glenn Danzig, too, although I've met Danzig - don't know if I ever told ya'll the story, but it is hilarious - remind me - it's a blog post of it's own - amongst other notables and what have you, so consider me filled with glee. Gives me something to look forward to while I slave away pouring beer and making stupid martinis.

I went to FoF in 2007 when Dario Argento was the guest of honor and it was absolutely fantastic. Not only was he charming and precious, seriously, he was precious, the convention was really well organized and put together and Toronto is a beautiful city. I did break out in hives all over my body for most of the time we were there (something in the hotel sheets, maybe?), but it was seriously one of the best trips of my life. Get your passports out and meet me there.
Posted by Jenn at 8:10 PM